How to Say “Amazing” in Korean

Have you ever wanted to know how to say “amazing” in Korean? It’s a unique and positive word that you can use in many different situations. There are various ways to say this, so we’ll explain how to do it! 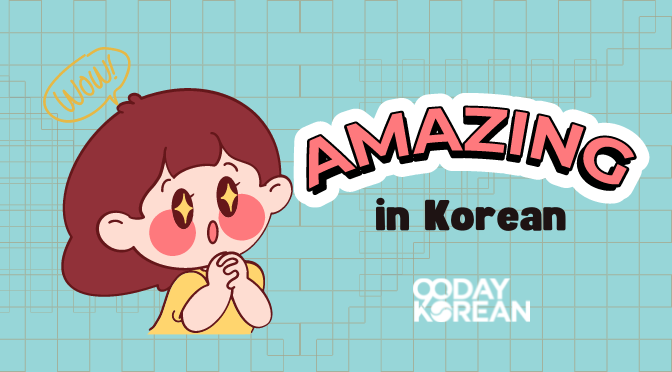 There are several different words for how to say “amazing” in Korean. Each of them also shares a lot of the same synonyms in English.

Here is a list of words that mean “amazing” in Korean:

Notice, however, that all of these words introduced above are in their basic verb form. This means that in order to use them in a sentence, proper conjugations need to be added. Unlike action verbs, descriptive verbs such as the ones mentioned above are often used to describe nouns. Here is how you can conjugate each word.

It is also possible to end a sentence by using these descriptive verbs. In this instance, with the –하다 (-hada)ending descriptive verbs, you can use similar conjugations as with any –하다 (-hada)action verbs out there. As for the case of 놀랍다 (nollapda), for example, it changes into 놀라워요 (nollawoyo), with the –ㅂ having been dropped off again.

Let’s look at some sample sentences to better establish your understanding of how to say “amazing” in Korean. This should help you also in memorizing the words.

It’s truly amazing how you could learn so many languages.

That girl’s news was so amazing it took my breath away.

Your idea is amazing.

Vocabulary related to amazing in Korean

The verb 대단하다 (daedanhada) also has a very similar meaning and connotation to the words mentioned above. However, while it can also be used to mean “amazing,” it is most often used to describe something that’s incredible, great, or tremendous.

While we always offer a romanization of the Korean words we teach, it’s best to actually learn the Korean alphabet, Hangul. It’s best to use that more than the romanization which tends to have some variations that can get you and others confused when used. Romanization is perhaps best left to assist in learning the pronunciation of the words.

Learning the Korean alphabet might seem like a scary idea, especially since it’s a completely new alphabet system. However, it’s actually a very systematic and simple alphabet to grasp! You can learn to master Hangul in less than two hours.

Today you have not only learned how to say “amazing” in Korean but added several new words to your vocabulary! Isn’t that AMAZING?!