Animals in Korean – Vocabulary for Pets and Wildlife Creatures

Do you know how to talk about animals in Korean?

It’s fun to talk about your favorite wildlife when you learn Korean. So let’s boost our Korean vocabulary and learn the words for all the different creatures.

We’ve made it easy by putting together a list of important words and examples for you. 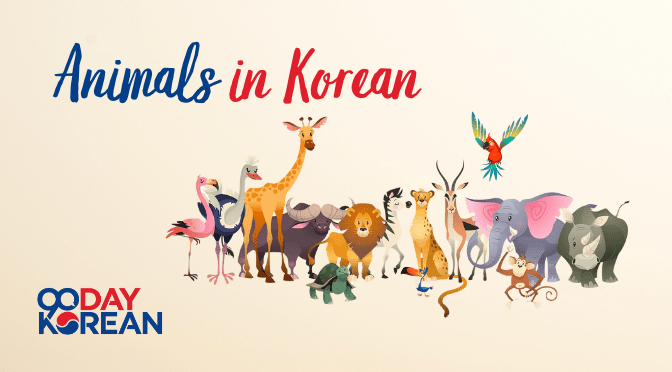 Here is a free PDF guide for Korean Animal Words that you can download and take with you:
Get “Animals in Korean” Free PDF Guide

Dogs, cats, snakes, horses, what do all these words have in common? They’re all animals, and they’re all fun to talk about in Korean.

The Korean words in this lesson are all written in both Hangeul (Korean Alphabet) and romanized English. You’ll be able to learn Korean much faster if you know the alphabet, and you can learn how to read before your next meal.

To start out, we should know that the word “animals” in Korean is 동물 (dongmul)

Now that we have that out of the way, let’s look at some lists of animals. Keep in mind that these are very general lists, and many animals could be included in multiple lists. We’re just keeping it simple.

I have a lot of pets.

If you’re a pet lover, you’ll love our first list. These are animals raised as pets. The top 3 are the most popular ones.

Dog in Korean is 개 (gae). It is one of the most common pets not just in Korea.

A puppy in Korean is 강아지 (gangaji).

Taking a walk with a puppy is fun.

The third most common pet is a cat. A cat in Korean is 고양이 (goyangi).

Generally, there are many animals we can see on a farm. But in this lesson, we’ll give you a list of the common farm animals in Korean.

A horse in Korean is 말 (mal). A zebra is is a striped horse called 얼룩말 (eollukmal).

A chicken is a common farm animal. Chicken in Korean is called 닭 (dak).

This video shows How to Say “Chicken” in Korean


How to Say "CHICKEN" in Korean

The crab can also be a farm animal, and the crab in Korean is 게 (ge). Snow crab is called 대게 (daege). It may come as a surprise to you that crabs are on the list of farm animals.

The word for pig in Korean is 돼지 (dwaeji) and it makes the sound 꿀꿀 (kkulkkul) which is the Korean term for oink.

Here is a list of some popular forest animals in Korean.

Bear in Korean is 곰 (gom). This is the word used for the animal “bear.”

There are many bears in Canada.

You might also notice the Korean word for bear in the word 곰인형 (gominhyeong), which is teddy bear.

The teddy bear was his favorite toy.

The word for panda in Korean is 판다 (panda). This one is an easy one because the Korean word for “panda” sounds similar to the English word!

Panda is a lovely animal.

There are 2 animals that commonly appear in popular K-Dramas and K-Pop songs and one of them is the wolf. Wolf in Korean is 늑대

The 2nd common animal that appears in Korean songs and dramas is the fox. Fox in Korean is 여우. Fox is commonly used as an expression.

At this point, we’ll learn a few of the many sea animals.

Below is a list of the popular aquatic animals.

The squid is another popular aquatic animal. Squid in Korean is 오징어 (ojingeo).

Birds are lovely animals. They’re beautiful because of their colorful feathers. Before we learn about the different terms used for birds in the Korean language, let’s learn what the word “bird” in Korean is. Bird in Korean is 새 (sae).

Here is a list of different birds with their corresponding Korean meaning.

There are many wild animals seen in the wild of Africa. Most of them can be seen in big zoos near us.

To know more about the various wild animals, here’s a list of them.

Monkeys are good at climbing trees.

On the other hand, an ape is called 유인원 (yuinwon).

Giraffe in Korean is 기린 (girin).

The national animal of South Korea is the tiger. The animal tiger is 호랑이 (horangi) in Korean.

The Siberian tiger is in many mythical stories in Korean culture, and some even think the Korean peninsula resembles a tiger.

The Korean national bird is the Asian magpie. This bird is called 까치 (kkaji) in Korean.

We didn’t forget the simple Korean sentences to help you start some conversations! These are in standard Korean and are considered polite, you can use them in most situations.

What is your favorite animal?

My favorite animal is panda.

That zoo has polar bears as well.

I take a walk with a dog every evening.

The neighbor’s dog is barking loudly.

Have you ever ridden a horse?

They are racing horses.

Birds are flying in the sky.

So today you've learned a lot of different wildlife vocabulary in Korean! Was there one we forgot but you'd like to know? Let us know and we'll add it to the list.

What's your favorite animal? Whether it's a cat, dog, horse, mouse, chicken, or even a snake, see if you can make a Korean sentence with it. Leave it in the comments below and we'll check your Korean!