Birds in Korean – Names of our feathered friends

This article will focus on different birds in Korean. Before, we learned the names of multiple animals in Korean, and now it’s time to focus on the birds’ translation specifically!

This vocabulary can be quite fun and useful to learn for daily life; for example, you may need to be able to know this when visiting the zoo. It’ll come especially handy if you want to go bird-watching. 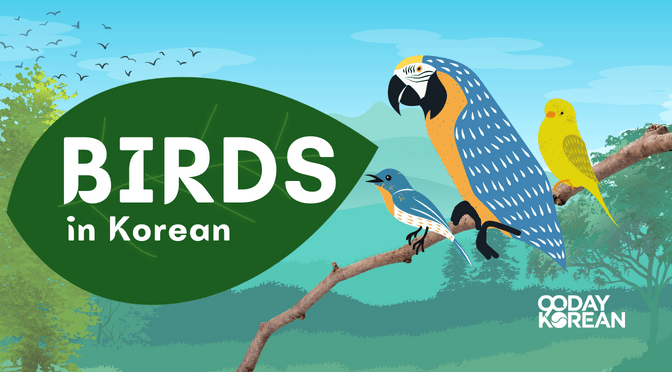 If you love birds or wherever your interest lies in, read on to learn some bird-related words. And, who knows, maybe you’ll also learn a little bit about what kind of birds you can see in Korea!

The general word for “bird” in Korean is 새 (sae). You can use this when mentioning birds in general, especially in the case of birds you see on the streets, bushes, and trees in your everyday life, which you may not even know the name for. It can be a chicken, sparrow, peacock, or the birds that we will learn about below.

Different names of birds in Korean

We’ve listed some specific birds, from owls to woodpeckers, and what they are called in the Korean language. 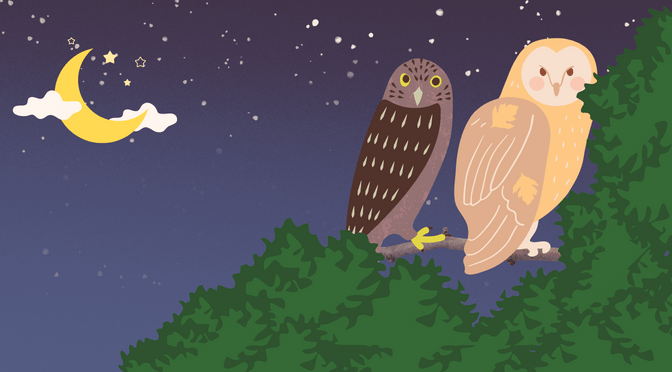 The word for “owl” in Korean is 올빼미 (olppaemi). Although their facial appearance may change depending on which owl species is in question, their features are always recognizable, and their coloring earthly. You can find owls basically anywhere in the world.

The word for “eagle” in Korean is 독수리 (doksuri). These majestic-looking animals come with sharp claws and beaks, with their coloring ranging mostly from black to brown. Similar to owls, eagles are also distributed all around the world.

The word for “ostrich” in the Korean language is 타조 (tajo). There are only two species of this huge bird that cannot fly. Today they are native to basically only Africa. However, it is also possible to see ostriches in person on South Korea’s Nami Island.

The word for “turkey” in Korean is 칠면조 (chilmyeonjo). These large birds with red and blue details on their face are native to North America. However, you can also find turkey species in Mexico’s Yucatán Peninsula. They enjoy life in foresty areas.

The word for “hawk” in Korean is 매 (mae). With an appearance somewhat similar to eagles, hawks also belong to the family of birds of prey. They are not quite as widely distributed worldwide as eagles, with many of them most commonly found in North America and nearby territories.

The word for “seagull” in the Korean language is 갈매기 (galmaegi). Typically, they are mostly white, with some grey and black features. You also must have heard a seagull wail at least once in your life. Gulls are found anywhere in the world, even including Antarctica.

The word for “flamingo” in Korean is 홍학 (honghak). These unique pink birds with long and slim legs can be found in parts of Africa and South America, as well as the Caribbean islands and nearby areas, in the case of the American flamingo. 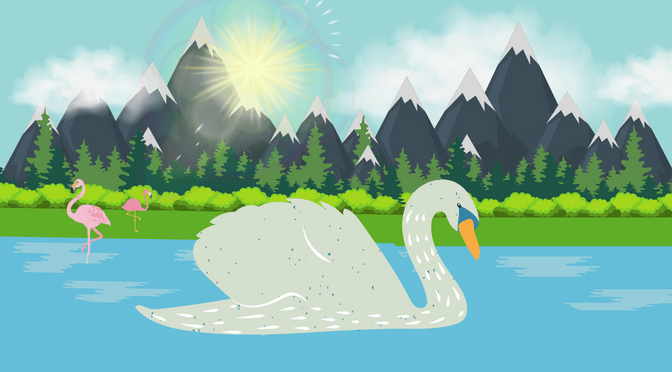 The word for “swan” in Korean is 백조 (baekjo). Swans are beautiful and majestic water birds mostly found in the Northern Hemisphere. Most of the swan species are of migratory nature.

The word for “stork” in Korean is 황새 (hwangsae). Just like flamingoes, storks also have long and slim legs, although they do also fly and soar to some extent. A stork species can be found nearly everywhere in the world except for the poles.

The word for “pigeon” in Korean is 비둘기 (bidulgi). These birds are slightly smaller than seagulls and come in various colors. You can find them nearly anywhere except the deserts and Arctic areas.

The word for “penguin” in Korean is 펭귄 (penggwin). These absolutely adorable black and white birds are also the type that cannot fly. Besides Antarctica, penguins also live on Galapagos Islands and South Africa, among other similar locations.

The word for “goose” in Korean is 거위 (geowi). Geese are water birds of the larger end, and they are of migratory nature. They come in different colors, such as mixes of brown, black, and white.

The word for “parrot” in Korean is 앵무새 (aengmusae). Parrots are some of the most colorful birds in the world. You can find them in the tropical and subtropical parts of the world.

The word for “woodpecker” in Korean is 딱따구리 (ttakttaguri). These small birds are known for the red tufted feathers on their crown and the tapping sounds they make on trees. Besides Antarctica, Australia, and its nearby regions, you can come across a woodpecker just about anywhere.

Sadly, not all of the birds mentioned above are ones you can find in South Korea. And some of them you may only be able to see in zoos. However, South Korea does have its own diverse selection of birds, which will be a delight for you to see in the wild.

For example, South Korea has numerous different goose species, although the majority of them are quite rare to get a sighting of. Swans, shelducks, and grebes, on the other hand, are far more common to come across nearby water.

As far as species of pigeons and doves go, only the Oriental Turtle-Dove appears to be commonly present in South Korea. Others are either not endemic to the nation or are rare sightings.

You will also likely see some type of cuckoo bird on a stroll in foresty areas at some point, as well as cormorants. Numerous gull species are, of course, common sightings in different parts of South Korea. On a good day, you’ll also be able to spot a hawk or an eagle flying around in the sky.

There are also some owls endemic to Korea, of which you are most likely to see the small and yellow-eyed Oriental Scops-Owl, the large and ear tuft-holding Eurasian Eagle-Owl, and the beautiful brown and white-colored Northern Boobook.

In addition to these few Korean birds we have named, there are numerous other bird species present in South Korea, both large and small. A particularly famous one among them is Magpie, which has earned its status as Korea’s National Bird.

As we briefly just mentioned, the Korean national bird is Magpie. The word for “magpie” in the Korean language is 까치 (kkachi). This beautiful, relatively small bird belongs to the Corvidae family. Among magpies, there are multiple different species, many of them sporting a black-and-white coloring, while others are blue and green.

In South Korea, it is the Oriental Magpie that is especially common to see around. This mostly black and white bird, sometimes seen with hues of purple or dark green, or dark blue, is often even referred to as Korean Magpie.

And now you know so much more about the words related to birds in Korean! In addition, you have also learned more about each bird and what kinds of birds you can find in Korea. Wow, did we just hit three birds with one stone, so to speak?

If you still have time to learn Korean, how about learning the different colors in Korean next? This way, you’ll also identify the birds based on their colors in the Korean language!

Leave us a comment below on what your favorite bird is!