Body Parts in Korean – Complete terms from head to toe

Do you know how to name the different body parts in Korean? These are some of the basics and are super fun to learn.

Whether getting a check-up with the doctor or just chatting with friends, we’ll teach you the important body parts in Korean. 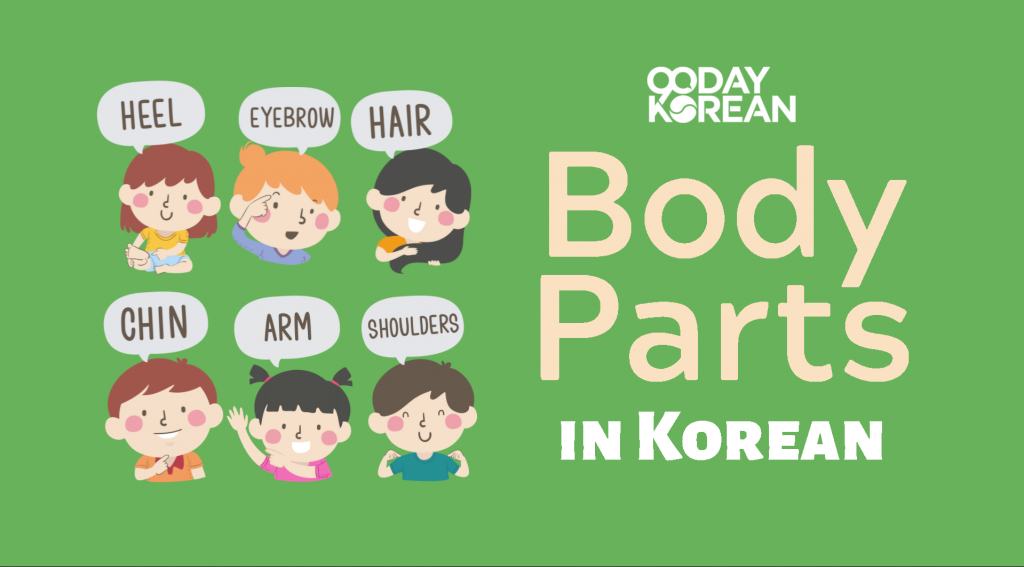 Here is a free downloadable PDF guide that you can take with you:
Get “Body Parts in Korean” Free PDF Guide

These will be some of the first words you focus on when learning the Korean language. We’ll list the Korean vocabulary in Hangul (Korean Alphabet) and romanized Korean. If you can’t read Hangeul yet, go here to learn Korean in less than 1 hour.

Before we proceed with the most common Korean words for specific human body parts, it’s just right also to know the term for the word human. You can say “human” in Korean as 인간 (ingan).

You can say “body” in Korean as 몸 (mom). You might also hear the word 인체 (inche) used, but this is a more technical term.

For quick reference, here’s a diagram showing the parts of the body from the front and the back.

Now let’s learn Korean-English terms for the human body parts starting at the top, and working our way down, from your 입 (ip | mouth) to your 발가락 (balgarak | toes)!

Parts of the head in Korean

Here are the Korean words for different body parts that you can find in the head and the face.

The Korean word for “head” is 머리 (meori). However, this word can also mean “hair” in Korean, depending on the context.

Similar to “head” in Korean, you can say “hair” in Korean as 머리 (meori).

However, if you want to distinguish the two, then you can use 머리카락 (meorigarak) for “hair.”

The word for “forehead” in Korean is 이마 (ima).

This body part that connects the head to the shoulders is called 목 (mok) in Korean.

The word for “face” in Korean is 얼굴 (eolgul).

Our nose lets us identify scents we encounter daily. The word for “nose” in Korean is 코 (ko).

There are two ways to say teeth in Korean which are 이 (i) and 치아 (chia). However, the Korean term 이 (i) is more commonly used during conversations.

These are the Korean words for the different body parts that you can find in the upper portion of the body.

The word for “back” in Korean is called 등 (deung). Proper posture, especially when seated during work, is important to avoid pain in this area.

My back has already been hurting for a week.

The “arm” in Korean is called 팔 (pal). While the  armpit or underarm is called 겨드랑이 (gyeodeurangi).

Yesterday I rode my bike, fell and hurt my arm. Thankfully I wore my helmet, so I didn’t hurt my head.

The word for “stomach” in Korean is 배 (bae). Make sure to eat all the right food to keep your 배 (bae) healthy!

손가락 (songarak) is the Korean term for finger. Each finger also has specific Korean terms.

The word for “heart” in Korean is 심장 (simjang) which refers to the organ that pumps the blood in our bodies.

It can also be called 가슴 (gaseum), but this word also means “chest” in Korean. Lastly, there is 하트 (hateu) which is the Konglish term for the word heart.

Below are the words for body parts in Korean that you can find in the lower portion of the body.

You can say “butt” in Korean as 엉덩이 (eongdeongi).

Specifically, 종아리 (jongari) means calf in Korean, while 허벅지 (heobeokji) is the word for thigh in Korean. These are commonly used terms in health and fitness.

The word for “foot” in Korean is called 발 (bal).

The same word, 발 (bal), is used for “feet” in Korean since there is no difference in its singular and plural terms.

The word for “knee” in Korean is 무릎 (mureup). We often scrape this area as kids when we fall.

I fell and hurt my knee. Now my knee hurts so much I want to cry.

I strained my ankle while working out.

Other Body Parts in Korean

Here are the rest of the body parts in Korean.

This is the largest organ in the human body, and it’s called 피부 (pibu) in Korean.

My skin is itching a lot since yesterday.

Blood in Korean is 피 (pi). You can also use the word 혈액 (hyeolaek).

The term 혈액 (hyeolaek) is often used in medical terms.

I am nervous because I need to take a blood test.

On the other hand, 피 (pi) is more common in daily conversation.

The hand is bleeding.

Why is it important to learn about body parts in Korean?

Knowing these will make it useful for describing symptoms of human body parts in the Korean language to a doctor if you’re in South Korea. It will also help you learn about human anatomy in Korean better. They’re great for using common Korean phrases or for trying out new grammar structures.

For more in-depth lessons on the Korean language in general,  we have our structured online course to help you. Go here and start making progress today!

There you have a quick rundown on the parts of the body in Korean from head (머리 meori) to toe (발가락 balgarak)! Now, if your neck (목 mok), foot (발 bal), or hand (손 son) hurts, you can explain it better to your friend or your doctor.

For similar lessons, check out:

What do you think about learning Korean body parts? Can you make some sentences using these Korean nouns? Please show us your best sentence in the comments! And if you have a part of the body you want help translating into Korean vocabulary, let us know, and we’ll get you an answer.