Chuseok – Everything you need to know about Korean Thanksgiving

Chuseok (추석), or hangawi (한가위), is one of the biggest holidays in South Korea. It’s a time when families gather together to give thanks to their ancestors for an abundant autumn harvest. 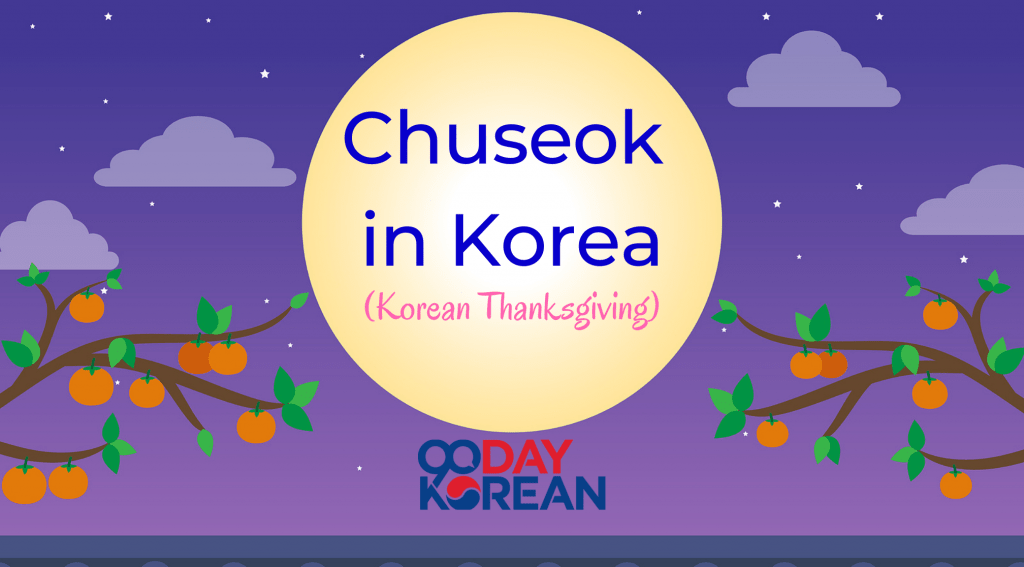 Sometimes called the Korean Thanksgiving, Chuseok is celebrated with good food, wine, and family gatherings. It typically takes place in September or October, according to the lunar calendar.

We’ll fill you in on everything you need to know about Chuseok, including when Chuseok will be celebrated this year!

Chuseok (추석) is a three-day holiday that is celebrated every fall. It is a traditional holiday where people go back to their hometowns to show appreciation for the fall food harvest. Chuseok is one of Korea’s biggest and most important holidays and an essential aspect of Korean culture.

Hangawi (한가위) is another term that can be used interchangeably with Chuseok. This word also refers to Korean thanksgiving.

What is Korean Thanksgiving?

It’s the other time of the year in Korea besides Lunar New Year’s Day, aka Seollal (설날), when the family members gather together.  Usually, this means traveling to the home of the head of the family, often one’s grandparents. Since the destinations are often outside of the big cities, this creates incredible traffic jams all over the country.

If you plan to travel to Korea during this time, be sure to plan accordingly. Many tickets for buses, planes, and trains are sold out in advance.

Chuseok (추석) is celebrated on the 15th day of the 8th month according to the lunar calendar. Although the exact day changes each year, Korean thanksgiving day is celebrated typically in September and October. Below are the dates that Chuseok are celebrated in the next years.

For 2022, Chuseok falls on September 10. The three-day holiday period for Chuseok includes the day of Chuseok and the days before and after it.

The day before Chuseok is when Koreans usually travel back to their hometowns in time for Chuseok.

How to say “Happy Chuseok” in Korean?

To greet someone during Chuseok, you may say 추석 잘 보내세요 (chuseok jal bonaeseyo). This means “Have a good Chuseok.” This is like saying “Happy Thanksgiving” in English.

What is the history of Chuseok?

According to legend, an ancient king of the kingdom, Silla, started a month-long weaving contest between two teams.   The team who had woven the most cloth won, and they were treated by the losing team with food, drinks, and other gifts.  Thus starting the tradition of thanksgiving almost 2000 years ago.

Some scholars also tie Chuseok to Korea’s history, wherein agriculture was a big part of daily life.  Koreans commonly offered rituals to ancestors to give thanks and celebrate the harvest moon.

What are some Chuseok traditions?

Traditionally, the purpose of Chuseok was for family members to gather together during the full harvest moon. This usually appeared in the sky on the 15th day of the 8th month of the lunar calendar. Families wanted to celebrate and show gratitude to their ancestors for the fruitful harvest.

Chuseok is very much a traditional holiday where many of the customs from the old days still stand. We’ll discuss some of these customs below:

Ancestral worship is common in Chuseok.  The representative foods for this service are freshly harvested rice, songpyeon rice cakes, and alcohol. 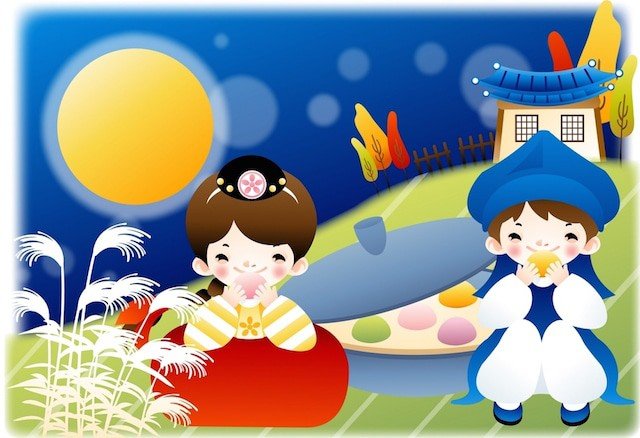 One of the main characteristics of the service is bowing to your ancestors. The service is followed by the family eating a meal together.

During Chuseok, it’s normal to visit the ancestral graves and pluck the weeds that have grown around the grave since last time. It’s considered a familial duty and a sign of devotion and often takes place already shortly before the Chuseok holiday itself.

What are popular Korean Thanksgiving food?

A popular Chuseok food is songpyeon. This traditional Korean rice cake is prepared with rice powder, filled with sesame seed, red beans, other beans, chestnuts, and so on. 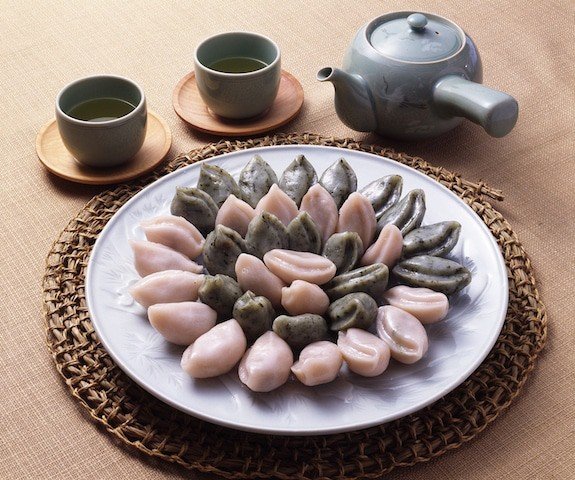 These half-moon rice cakes will then be steamed with pine needles to create a more distinctive taste. The family prepares these rice cakes the evening before Chuseok, and it looks like the lunar moon. It’s a popular belief that those who succeed in making beautifully shaped songpyeon will give birth to a beautiful child or have a successful marriage.

Japchae is another traditional Korean dish to prepare and eat over Chuseok. 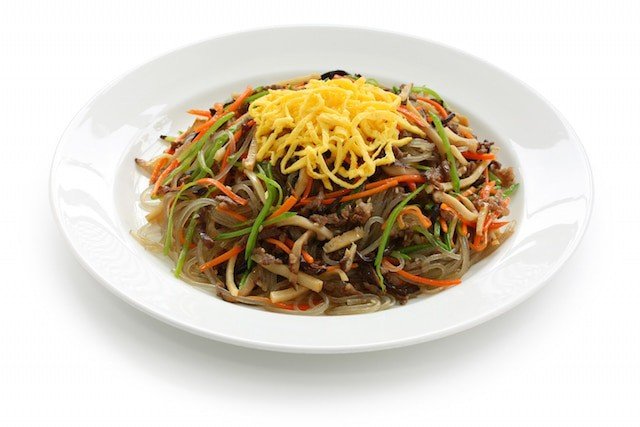 This noodle dish is stir-fried in sesame oil with mushrooms, onion, carrot, spinach, etc. Beef is also sometimes added to the dish, and soy sauce is usually used to add flavor.

Another type of Chuseok food is traditional Korean pancakes. They are also commonly found at dinner tables of South Koreans when it’s Chuseok. 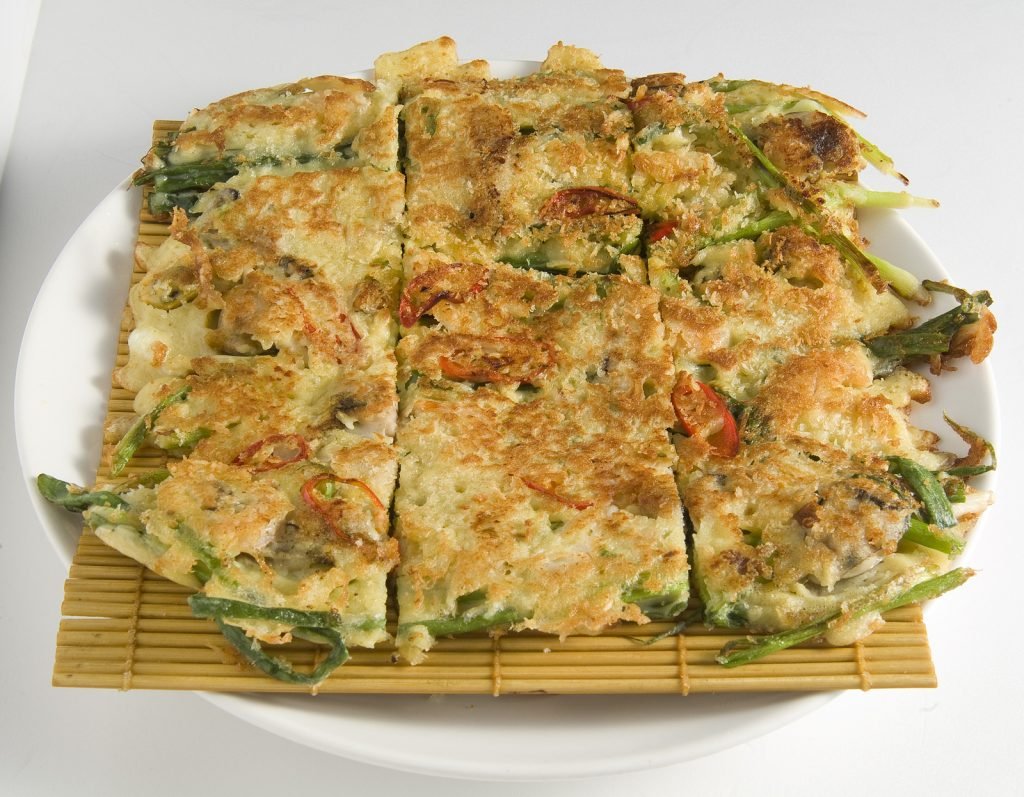 These are made using fish, sweet potato, zucchini, and other ingredients coated with egg and/or flour and then pan-fried.

Craving for a heavy meal? Galbijjim (갈비찜) is also popular during Chuseok. Somewhat an expensive dish, Galbijjim is basically braised beef made with short ribs and mixed with vegetables. 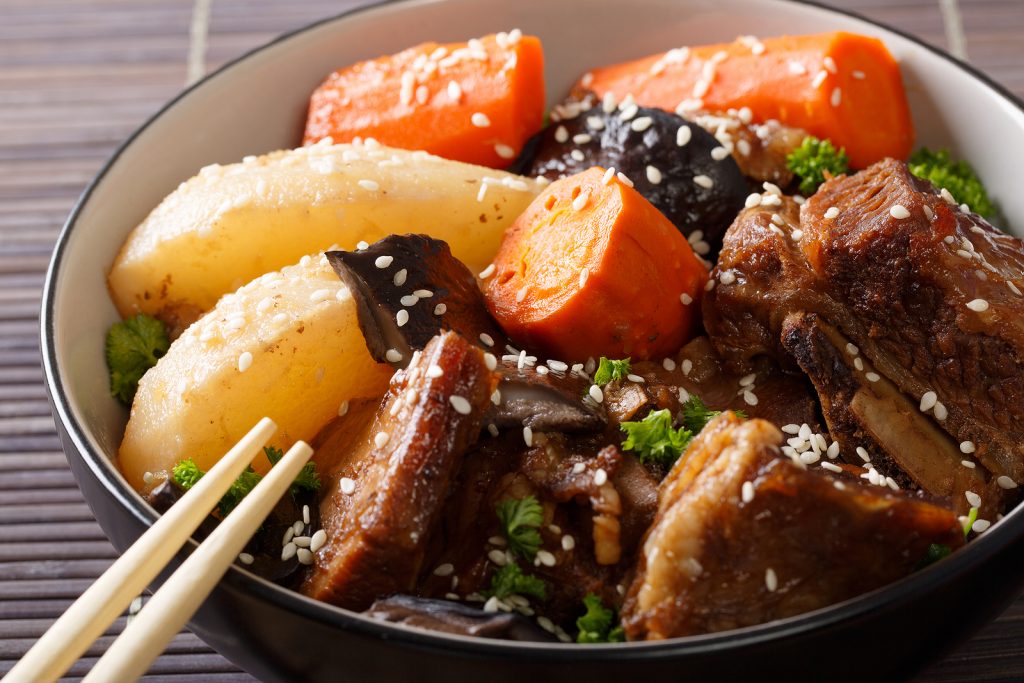 It’s a sweet and savory dish that’s best served with rice.  This Chuseok food is usually served during family gatherings, even outside the holidays.

A modern-time custom taking place during Chuseok is gift-giving. Although not everyone is required to give gifts, it’s considered a nice gesture to give the host family (usually the grandparents or the family’s eldest son) gifts when you’re visiting their house for the holiday. Some people also choose to give gifts to partners or seniors of the company they’re working for as a goodwill gesture.

Since Chuseok is a family event, giving something that the entire family could share is much more practical. Food is more likely a top choice, especially for those going to another family’s home to celebrate the holiday.

However, plenty of other gift ideas also exist, and the supermarkets and department stores get filled with all sorts of gift sets applicable for gift giving.

In Korea, spam is one of the most popular gift sets to give during Chuseok.  Korea was once ranked as one of the world’s top consumers of Spam. Although Spam is a US product, its taste makes it easy to incorporate into Korean cuisine, hence its popularity.  It’s not a surprise that spam would be a go-to item for gifts. 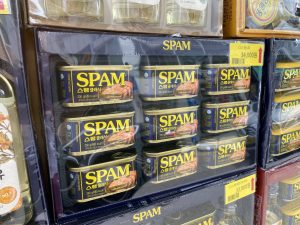 Since Chuseok is traditionally a thanksgiving celebration for good harvest, Fruits (pears, apples, etc.) or other agricultural products seem to be an appropriate gift for those visiting family or loved ones. Fruits can also serve as an offering in rituals done during Chuseok, so giving a fruit basket to your host would be hitting two birds with one stone.

If you’re visiting a family of meat-eaters, a meat set is also a trendy gift during Chuseok. There are different meats in Korea to choose from with different price ranges. If you want a more expensive option, you may want to give your loved one Hanwoo (한우) or Korean beef. But prepare to break the bank as it’s one of Korea’s most expensive meats!

What are other things commonly done during Chuseok?

There are also plenty of traditional games and performances that people can enjoy during the holiday.

This traditional folk dance is one performed by women as a prayer for a fruitful harvest. The women gather together under the full moon, make a circle, and grab each other’s hands while singing and rotating clockwise. The speed of the dance will steadily increase, and the dance might last even until dawn.

Ssireum is a traditional wrestling sport in Korea. Two opponents wrestle while holding the opponent’s belt, which is called satba (샅바). The winner is the player who manages to get their opponent down on the sandy ground. 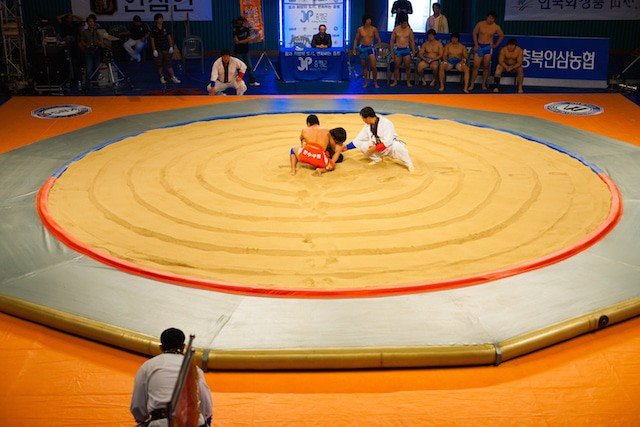 It’s commonplace for families to watch the ssireum contest on TV on the Chuseok holiday. The prizes for winning the contest are bull and rice.

This sport originally gained popularity during the Joseon Dynasty. Traditionally, this activity took place on Dano (단오), the Korean holiday on the 5th day of the 5th month according to the lunar calendar.

This activity of unknown origin is also popular on Chuseok. Unlike Western-style bullfighting, Korean bullfighting is much less gruesome. It’s not exactly just a competition as its purpose is also to show how well the trainer raised their bull. These bulls will butt heads until one of them yields. Cheongdo (청도) is the city to visit if you want to see this.

How can visitors and foreigners enjoy Chuseok?

If you’ve been in Seoul during Chuseok before, you’ve probably noticed how empty it suddenly gets for a few days. As a foreigner, it’s often hard to experience Chuseok the traditional way unless your friend or significant other invites you to join their family.

Still, if you want to get a small taste of it, there are plenty of cultural sites in Seoul, such as Namsangol Hanok Village, that offers special holiday events. 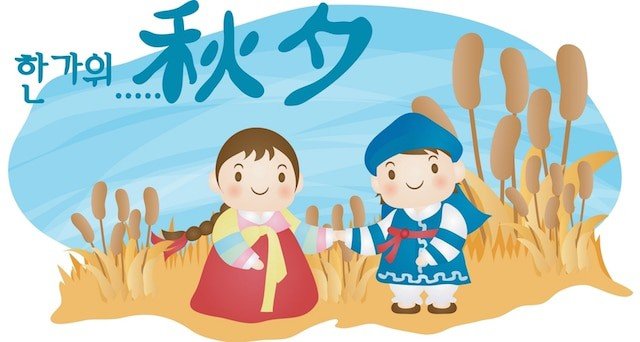 Also, Chuseok in Korea might be the perfect opportunity to visit places like Everland or Caribbean Bay, which offer special discounts for foreigners during the holiday. The weather’s still pleasant enough to enjoy such outdoor activities, and it’s much less crowded in comparison to a normal day.

What will you do during Chuseok this year? Let us know in the comments below!