How To Say ‘Drama’ In Korean

Korean media, such as K-pop music and K-dramas, are often how foreigners become interested in South Korea. But it’s not surprising that this media is even more popular among Koreans themselves.

So learning how to say ‘drama’ in Korean will help unite Korean and Korea fans alike! After this lesson, you can start asking your Korean friends about their favorite dramas and music. 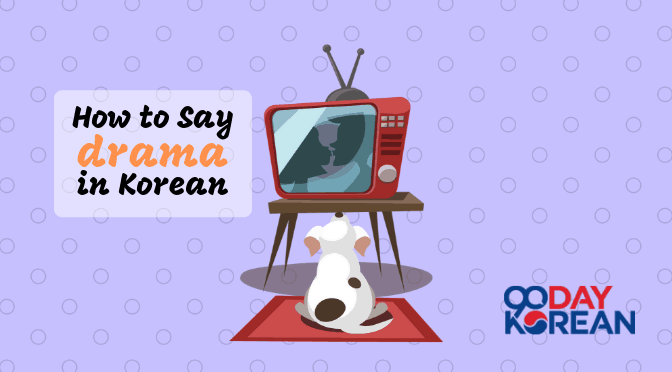 The word for how to say ‘drama’ in Korean is 드라마 (deurama).

If you didn’t notice, it is a Konglish loan word from English, so it should be easily recognizable and memorable to you. It’s a Korean word that you will likely hear often.

드라마 (deurama) is the word used for scripted TV series in Korea, such as Goblin and Boys Over Flowers, and no other word for ‘TV series’ exists. You can also use the word 드라마 (deurama) to refer to plays in the theater, however, this is far less common.

For a drama in the theater, you should usually use the word 연극 (yeongeuk) instead. This word also translates to ‘drama’, though it more specifically means ‘play’.

Another word for ‘drama’ is 극 (geuk). You may have already noticed this being a part of the word 연극 (yeongeuk). However, its usage is not only with this. The word isn’t often used on its own, it’s combined with other words to create more detailed descriptions of the drama being discussed. For example, 역사극 (yeoksageuk) or 사극 (sageuk) , which means ‘historical drama’.

How to say “EPISODE” in Korean (dramas, movies, and TV shows)

While it is possible for you to study the words in this article simply by reading their romanized versions, it will come in handy for you to know Hangeul if you wish to come to Korea. Hangeul is the Korean alphabet, and not difficult to learn. In fact, you can learn it in just 90 minutes.

After you’ve familiarized yourself with Hangeul, life in Korea will be more comfortable and the country won’t appear so foreign for you. So, if you’re serious about learning Korean, why not learn Hangeul today?

So now that you know how to say 'drama' in Korean, you can spend all day talking drama with your Korean friends! Check out our other post of great K-drama phrases for learning Korean.

What's your favorite K-drama? Let us know in the comments below!