Korean cuisine is filled with many kinds of delicious foods, which makes learning about food in Korean crucial. In this lesson, we’ll teach you the Korean words for different kinds of food.

The types of food you can find in South Korea are so vast that every experience you have, from street food to eating Korean dishes and delicacies in a restaurant, is all worthwhile. 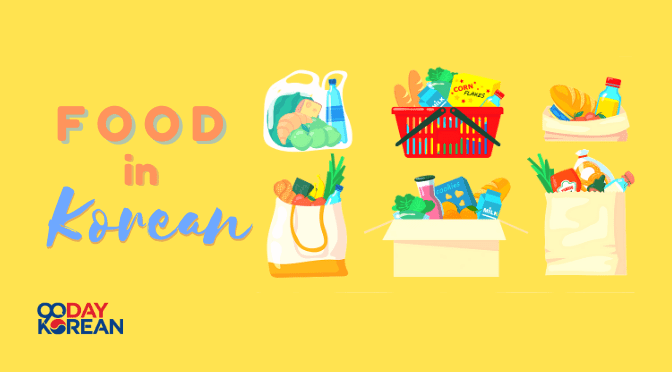 In this article, we will be learning the different Korean terms for food – as in what the different vocabulary for different vegetables, fruits, noodles, etc. This will be crucial when you are in South Korea, especially if you plan to shop for groceries at the supermarket!

First things first, let’s learn the Korean word for food: 음식 (eumsik). It simply means food in general and is the big term you’ll want to use when you speak of your country’s cuisine.

Another word for “food” in Korean

Though the general term for food is 음식 (eumsik), the word 밥 (bap) is also another term used. Now, this word actually means “rice,” just like in 비빔밥 (bibimbap) or mixed rice, so you don’t want to use it the same way as 음식 (eumsik).

However, a common conversation topic among Koreans is asking others whether they’ve yet eaten, and it’s the word 밥 (bap) that is typically used in that situation. That is because, in Korean culture, rice is a staple food item in South Korean cuisine. It is found on the table during nearly every meal, including breakfast.

In South Korea, when you are thanking for a well-done meal, you’ll also use the word 밥.

Vocabulary for different types of food in Korean

Now that you know the general term for “food” in Korean let’s get to learning the food vocabulary in Korean!

These healthy vegetables are essential in Korean cuisine and can be used in different South Korean dishes, especially in soup, stew, stir-fried dishes, and noodles. 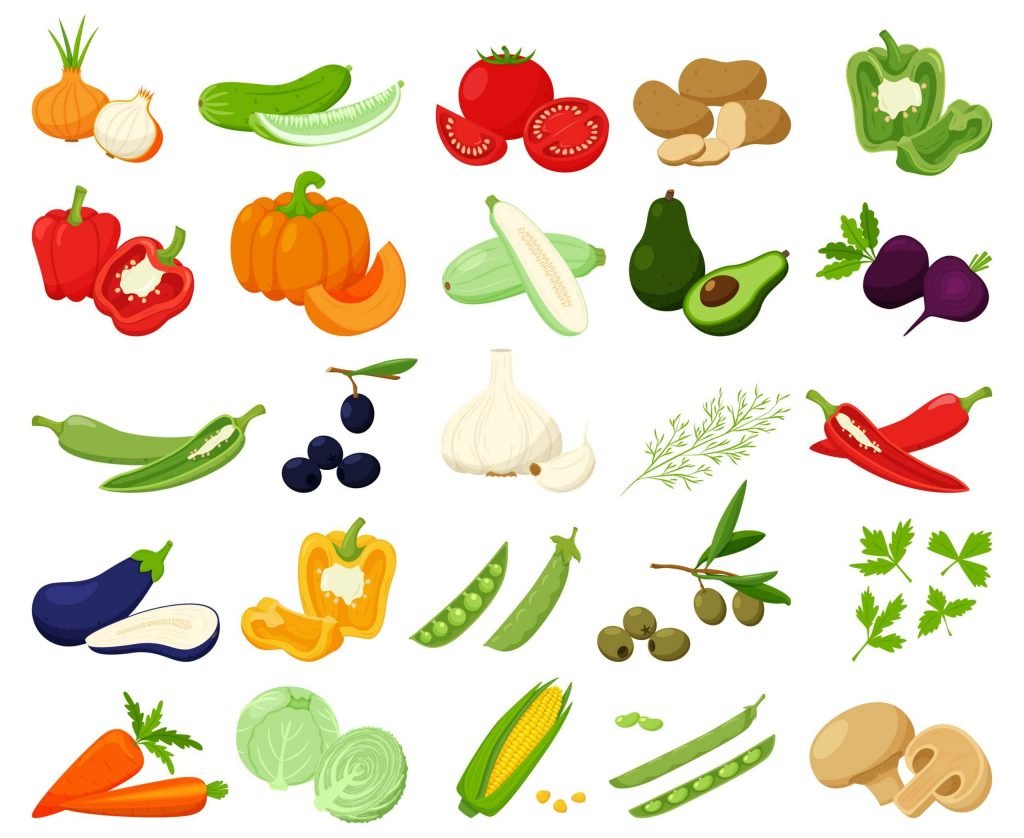 “Cabbage” in Korean is 양배추. This is the main ingredient for the popular Korean side dish called Kimchi. It’s made of cabbage and chili powder. However, kimchi isn’t limited to cabbage.

The Korean term for “scallion” is 봄양파 (bomyangpa). This is used alongside seafood to create the famous dish 해물파전 (haemul pajeon) which is a savory pancake. This vegetable is also similar to green onions, which translate to 파 (pa) in Korean.

This list shows Korean words for healthy foods that can be enjoyed as is or can be made into something even better. 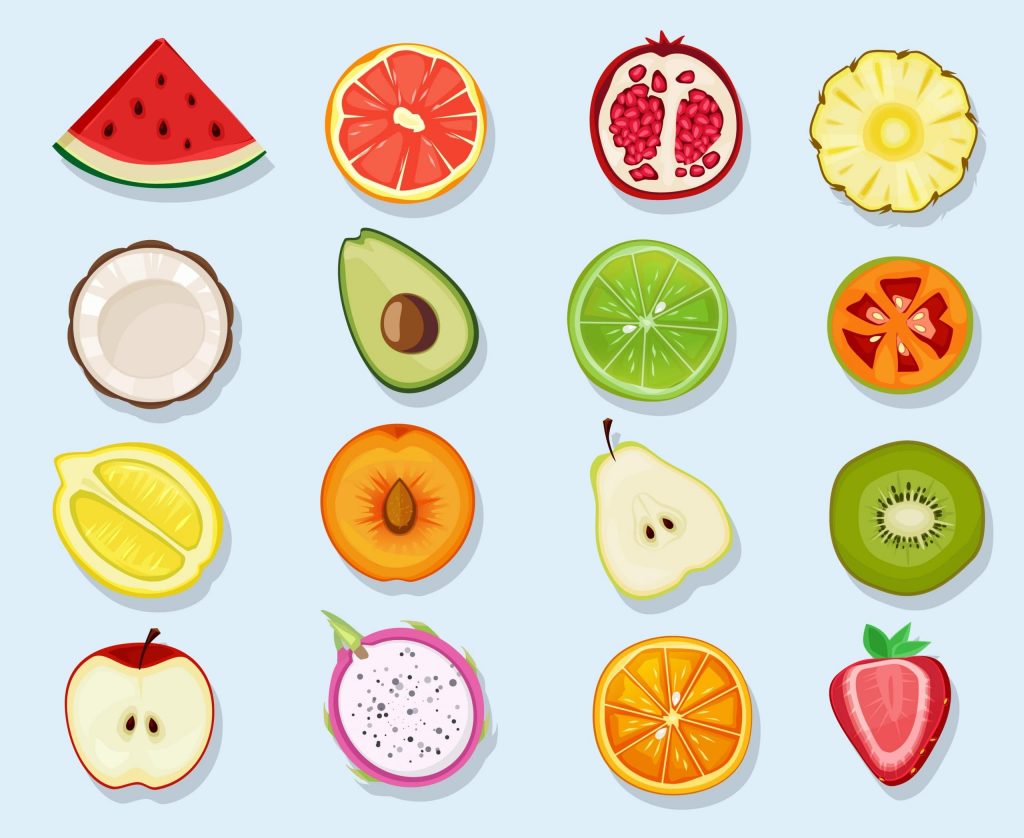 This is very easy to remember as the Korean term for “banana” is also 바나나 (banana).

For even more vegetable and fruit vocabulary, we have an article solely dedicated to them right here!

The word for “meat” in Korean is 고기 (gogi). These are used as the main ingredient for plenty of food that Koreans and people all around the globe enjoy. 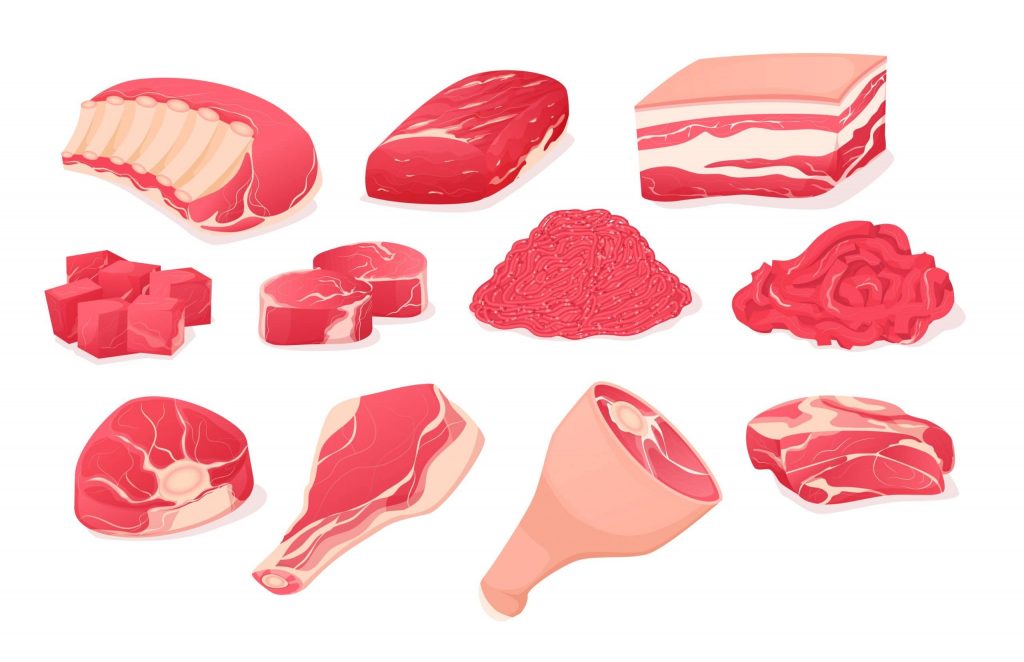 Marinated beef slices in Korean are called 불고기 (bulgogi). This meat is often served in barbecue places or can also be stir-fried.

Pork belly meat in Korean is called 삼겹살 (samgyeopsal). These are pork strips that are also often grilled in Korean barbecue restaurants. You can eat it with rice, lettuce, or side dishes like kimchi. Whichever flavor suits your palate!

For more vocabulary about the different meats and meat dishes, you can check out our article on meat in Korean!

Each ingredient on the list helps enhance the flavor of the dish that you plan to make to match your palate.

You can say “bread” in Korean as 빵 (ppang). One popular snack made of bread in Korea is called 계란빵 (gyeranppang) which translates to “egg bread.”

“Rice” in Korean is 밥 (bap), and this staple Korean food is an ingredient used in 비빔밥 (bibimbap). This dish means “mixed rice” where rice is mixed in a bowl with different ingredients.

This may include vegetables, ground beef, seasoned seaweed, and a spicy sauce made from chili paste, soy sauce, sesame oil, and brown sugar. Oftentimes, you can top this with kimchi and fried egg, too, depending on your variation!

Soy sauce is an important ingredient that is well-known and is essential in different cuisines around the world. In Korea, soy sauce is called 간장 (ganjang).

The chili paste is part of most dishes cooked in South Korea and is called 고추장 (gochujang). A red chili paste gives a dish its flavor and fiery color, which is common in cuisines cooked by Koreans, especially in soup or stew dishes.

You can also find this as a sweet and spicy sauce for 떡볶이 (tteokbokki ), which is a traditional Korean dish made of rice cakes (glutinous rice flour) and fish cakes.

Another important vocabulary to learn is what we usually pair with our food which is the beverages. 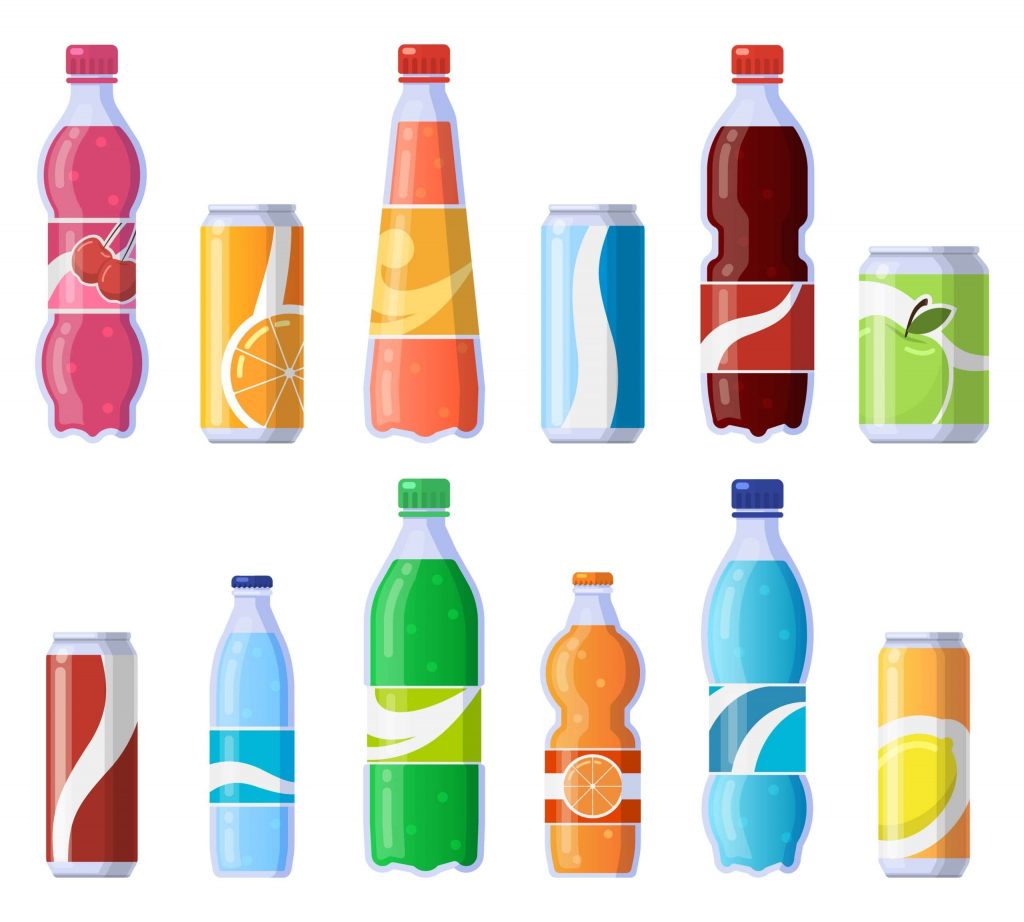 The alcoholic beverage, 소주 (soju), is a signature drink enjoyed by Koreans. It can be paired with anything, from fried chicken to Korean BBQ, to any various street food.

Another popular and traditional alcoholic beverage in Korea is the Korean rice wine which is called 막걸리 (makgeolli). This is often paired with the savory Korean pancake called (파전) pajeon.

This popular drink is the perfect company to cap off the busy week for some. If you’re in South Korea and you want to buy one, you can ask for a beer in Korean as 맥주 (maekju).

Types of Food Preparation in Korean

In this section, we will teach you vocabulary that is based on the method with which a dish in Korea, from meat dishes to soup or stew types of dishes was prepared. These methods of cooking contribute to the variation of Korean dishes. You will usually find these words included in the name of the dish, just like in other languages.

The term for fried in Korean is 볶음 (bokkeum).

For example 볶음밥 (bokkeumbap), which is fried rice. Another example is 제육볶음 (jeyuk bokkeum) which means stir-fried pork.

The word for stew in Korean is 찌개 (jjigae). Traditional Korean food recipes for this type of food have existed for a long time just like the Army Stew or 부대찌개 (budaejjigae), which was made popular after the Korean War.

Other popular types of stew in South Korea are 순두부찌개 (sundubu jjigae) or soft tofu stew, and 김치찌개 (kimchi jjigae), which is kimchi stew.

For soup in Korean, there are two words. A bowl of these will surely keep you warm.

The first word is 국 (guk), which is a native Korean word and usually attached to dishes that are lighter and have a lot of vegetables, such as 미역국 (miyeokguk), which is seaweed soup.

The second word is 탕 (tang), which is a Sino-Korean word. These soups may be heavier and less watery, for example, 삼계탕 (samgyetang), which is a ginseng chicken soup made with a whole chicken. Another example is 설렁탕 (seolleongtang), also known as ox bone soup which is made from ox bones and other cuts. Boiling this soup for several hours creates a rich beef broth.

There are different noodle dishes, and we’ll show you three words for noodles in Korean.

The first word is 사리 (sari), which refers specifically to uncooked noodles. The native Korean word for noodles is 국수 (guksu), such as 칼국수 (kalguksu), which stands for handmade chopped noodles.

The Sino-Korean word for noodles is 면 (myeon), such as 라면 (ramyeon), which means instant noodles, or 냉면 (naengmyeon), which is made of cold buckwheat noodles. Otherwise, there is no big distinction when you use 국수 (guksu) and 면 (myeon).

The word for steamed in Korean is 찜 (jjim). For example 찜닭 (jjimdal), which can be translated as both steamed chicken or braised chicken.

Although not exactly the same method of cooking, for both roasted and grilled dishes, we use the word 구이 (gui). For example, 조개구이 (jogaegui), which means roasted clams.

“Side Dishes” in Korean

As there are a variety of side dishes eaten at every meal in Korea, it is also good to learn the general term for a side dish in Korean, which is 반찬 (banchan). The most common side dish that you can find during meals is 김치 (kimchi). There are plenty of other side dishes, but some other examples are 해물파전 (haemul pajeon), sweet potatoes, fish cake, and mung bean sprout.

Some food in South Korea is also eaten raw, and therefore it’s good to know this word as well.

We already have a separate article to help you with ordering food in Korea, but we wanted to quickly go over some basic phrases and terms with which you can describe the Korean food you are eating.

The word for “sour” in Korean is 새콤해요 (saekomhaeyo) but you can also say it as 시큼해요  (sikeumhaeyo). You can use this word to describe sour foods like Kimchi, citrus fruits, or vinegar.

“Sweet” in Korean is 달콤해요 (dalkomhaeyo) which can be used in describing the sweet taste in food like desserts.

There is plenty of Korean food that you can describe with the word for “spicy” in Korean, which is 매워요 (maewoyo). A great example would be Buldak (불닭) or spicy chicken.

Sometimes, you might want your food to have more flavor, or you find it a bit too salty. Either way, the word for “salty” in Korean is 짜요 (jjayo).

The Korean word for “bitter” is 쓴 맛 (sseun mat) which is used to describe a bitter taste. You can use this word to describe food such as the vegetable bitter gourd.

Wow, did this post make you massively hungry for Korean food? Because it sure made us! Hopefully, this was educational and will make your next meal in a Korean restaurant, at home, or with street food a more exciting experience. Next up, do read our article introducing specific dishes from Korean cuisine!

26 replies to "Food in Korean – Top Dishes and Beverage Names"