How To Say “Great” In Korean (+good and best)

Do you know why learning how to say “great” in Korean is important? It’s for the moments when you want to describe something to your Korean friend, and as you say “good” in Korean, it just doesn’t quite cut it. Thus, the best way to say it would be with the word “great” instead! 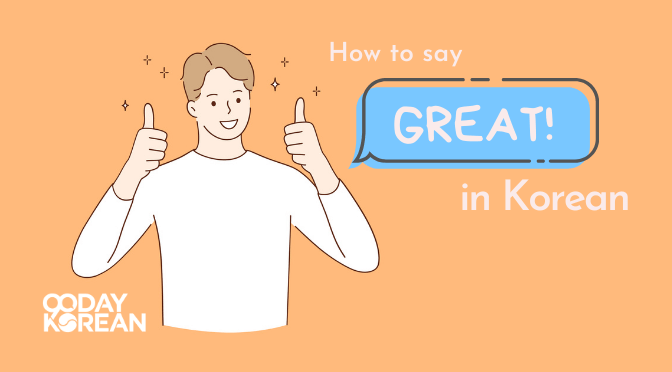 Keep reading, and this article will teach you how to say “great” in Korean, preparing you for when that important moment comes. Have a great time learning Korean with us today!

There are a few Korean word options for you to use when describing something as “great” in Korean, depending on what you want to say.

The ability she has for work is incredible.

You are incredibly beautiful.

This Korean word can be used to describe something or someone that is not only “great” but “remarkable,” “magnificent,” and “superb.” For example, the new movie you just saw or the best book you’ve ever read.

I wanted to recommend this book because it’s great in every aspect.

The third Korean term is another excellent word to imply that something is “great” and can be used in various situations. For example, it is especially good to use when you want to describe something as “greater” or “the greatest.”

A mother’s love is the greatest love in the world.

Lastly, when you wish to speak of specifically the size of something, such as your tall height, then the verb 크다 (kheuda) is your best friend. While its Korean translation is not that of “great,” it can be used as such, also in situations where you might want to describe the likelihood of something happening as great.

He will become a great person in the future.

The chances of raining tomorrow are great, right?

How to pronounce “Great” in Korean

Now that you know the words for “great” in Korean, let’s take it to the next level and listen to how it is actually said. Here’s a video to teach you how to say “great” in Korean using the correct Korean pronunciation.

How to say “good” in Korean

Now that you’ve learned how to say “great” in Korean, it’s also useful to learn other Korean words related to “great.”

The standard word for “good” in Korean is 좋아요 (joayo), which is from the Korean verb 좋다 (jota).

The formal version for this word would be 좋습니다 (joseumnida).

Lastly, you can say 좋아 (joa) for the informal version of “good” in Korean.

How to say “very good” in Korean

If “good” isn’t quite enough, how about saying “very good” in Korean instead?

There are two ways to say “very good” in Korean for its standard version. You can use either 아주 좋아요 (aju joayo) or 매우 좋아요 (maeu joayo).

For its formal and informal version, the same words are used with “good” in Korean, which is 좋습니다 (joseumnida) and 좋아 (joa), respectively.

How to say “best” in Korean

The final word we’ll learn is “best” in Korean which is 제일 좋아요 (jeil joayo). Similar to “good” and “very good” in Korean, you can still use 좋습니다 (joseumnida) and 좋아 (joa) if you want to say “best” in Korean formally and informally.

While it is possible for you to study the Korean words in this article simply by reading their romanized versions, it will come in handy for you to be able to read Hangeul if you ever wish to come to Korea. Hangeul is the Korean alphabet and is not difficult to learn. You can learn it in just 90 minutes.

After you’ve familiarized yourself with Hangeul, life in Korea will suddenly seem so much easier, and the country won’t appear so foreign to you. So, if you’re serious about learning the Korean language, why not learn Hangeul today?