Halloween in Korea – How to celebrate this popular event

Have you experienced Halloween in Korea? Derived from the old European celebrations of All Hallow’s Eve, Halloween has grown into a true worldwide phenomenon.

Although trick-or-treat activities largely remain an American way of enjoying Halloween, other countries around the world have introduced their own bits of celebrations into their cultures, including Korea. 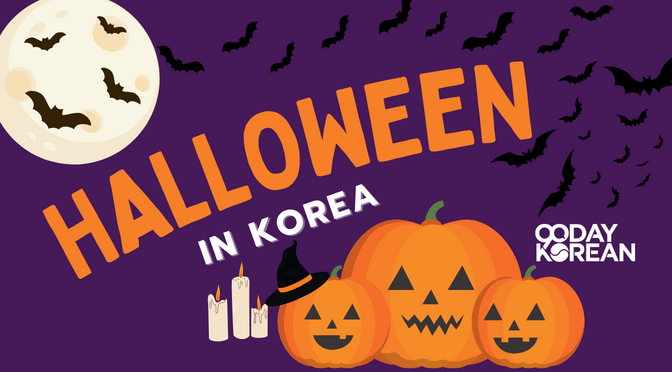 What is Halloween in Korea like, then? How much fun can you get into over the annual Halloween festival? How much might it differ from western traditions? In this article, we will tell you all there is to know about the Korean Halloween celebration!

What is “Halloween” in Korean?

The word for “Halloween” in Korean is 할로윈 (hallowin). It’s similar to how it’s expressed in English, so it’s wonderfully easy to remember!

How to say “Happy Halloween” in Korean

This is incredibly easy as well. Just say 해피 할로윈! (Haepi hallowin!) to greet people “Happy Halloween” in Korean. One of the perks of Halloween being an imported holiday is that you won’t have to learn totally new expressions for it.

When is Halloween celebrated in Korea?

Halloween in Korea is celebrated annually on October 31. This falls on the same date as other countries’ Halloween celebrations.

How to celebrate Halloween in South Korea

Sadly, if you are in Korea, you will most likely not be able to go trick or treating as it is not in any way a custom there. You may not get to marvel at Korean houses and buildings all donned up in creepy Halloween decorations.

None of your local friends may be accustomed to the idea of carving pumpkin heads. And unfortunately, people probably won’t put together haunted houses, either.

However, as this event is becoming increasingly popular in recent years, you may also have fun while celebrating this event in Korea in some other ways. It’s not in any kind of way a traditional holiday for Koreans, but it’s something that especially young adults love to enjoy in some fashion, possibly due to the influence of American media.

Every year, the idea of celebrating Halloween also seems to be gaining popularity, even if it has remained significantly different from traditional celebrations of the holiday. And don’t worry – putting on a terrific dress or attire is still most definitely a part of it! Here are some popular ways how this event is celebrated in Korea.

For example, you may be able to find Halloween-specific discounts or other types of specials in some stores. Notably, bakeries and cafes may come up with drinks and pastries related to Halloween that you’ll regret not tasting the one time. You might even find a zombie bartender who’ll make you a drink!

Don’t be surprised if you find some masterfully decorated monster cupcakes or ghost donuts or the like, especially at places such as Dunkin’ Donuts or Krispy Kreme. Independent locally-owned cafes likely will also have cakes aligning with the Halloween theme.

And, at the very least, you will be able to drink some pumpkin lattes or similar drinks! For example, Starbucks can be a safe bet for finding some Halloween-related drinks and cakes.

And yes, costume parties are a big part of Halloween in South Korea! Especially in the different neighborhoods of Seoul, you can put on a costume and go out for a fun night out without being looked at as weird. You can dress up as a ghost, monster, zombie, or perhaps your favorite fictional character!

Some costume shops have popped up in the past couple of years, from where you can find costumes unless you want to make one yourself or order it online.

Enjoy a Halloween Party in key cities in South Korea

You can enjoy Halloween in a costume anywhere in the city, but for the flashiest night, head over to either Itaewon or Hongdae. Especially Itaewon, the part of Seoul that’s known to be particularly foreigner-friendly, likes to decorate its storefronts in anticipation of Halloween.

Once the big night comes, everyone who’s anyone will put on elaborate costumes of their liking and go roam around the streets of Itaewon. There may not always be an official costume contest held, but just parading around the streets filled with bars operates as a showcase for the dressers and general crowds in Itaewon.

If you have seen the Korean drama Itaewon Class, you may already have an idea of what to expect, as it was shown quite accurately in this drama.

In Hongdae, many people will also dress up and spend the night hopping through bars and clubs. Some meetup organizations like Seoul Pub Crawl may also host special events like bar hopping as well, which may be fun to join with friends or alone.

For those who get exhausted over how crowded Itaewon gets, there may also be more much-welcomed breathing space on the streets of Hongdae. Even so, Hongdae is also expected to get full with Halloween party people in costumes.

Although Gangnam is not as big of a spot for Halloween brawls and costume parties, you do find one of the best costume shops in Seoul in that neighborhood. It’s called Toy Party Store, and it may be quite fun to go have a look around.

You’re guaranteed to find some Halloween-related accessories there, even if you don’t find costumes to your liking. A Haunted Factory Party also takes place in Gangnam, hosted by Global Seoulmates.

In case you are a teacher at a school or an academy in Korea, you may get chances to decorate for Halloween with your students and maybe even do an event around it. But in general, parents don’t tend to celebrate this event with their children, not in a big manner, anyway.

It is more likely they would take their kid to an amusement park to watch the parade rather than have them all dressed up in costumes. American military bases may, of course, be notable exceptions to this.

While you won’t be able to find any big orange pumpkins in South Korea – except possibly at military bases – there are other types of pumpkins available at grocery stores. By utilizing them, you can make delicious pumpkin meals and treats, such as a pumpkin pie, in celebration of the holiday at home.

Here are also some additional events you may want to check out during the Halloween season:

If you’ve got the time to head out of Seoul, a great destination to head over to is Yongin, specifically the largest theme park in Korea, the Everland amusement park.

Besides having fun riding all its excellent rides, Everland always decorates for Halloween quite nicely. Actually, “nicely” would be an understatement, as the theme park looks really awesome during this season, even if it’s a little more cute than scary.

And, since a few years ago, they also began hosting an annual parade party on Halloween, which can be exciting to watch. There can also be other Halloween-specific activities to get swept up in, like the “Everland Blood City” with zombie photo spots. Some years there have also been rides decorated accordingly, as well as a haunted house.

Go enjoy a day at this popular amusement park while marveling at the awesome Halloween-themed places they have managed to set up. They also host a Halloween-themed parade, during which candies will be given away to children.

Many of the attractions will get a Halloween do-over. There’s a prison escape room and more to enjoy when visiting during the Halloween season.

With the first race having been arranged in 2019, Halloween festivals like the Zombie Run Festival have the potential of becoming a popular activity to get swept up in on Halloween. This is a modern part of Halloween that was also first put into action in the United States, from where Koreans picked it up.

In Zombie Run, participants are divided into two groups. One group consists of survivors, which is where general participants get placed, and their task is to run away from the zombies. The other group, of course, is the zombies.

They are played by professionals, with proper Zombie costumes and makeup on. The run is 3 kilometers long as a whole and is expected to take up to 1 hour, starting from Lotte World Tower.

Dark Side of Seoul Ghost Walk

This event isn’t specific only to Halloween, as you can book the ghost walk any time of the year. However, due to its theme, it makes for an excellent and also unique way to celebrate this holiday when in Korea.

On this tour, you’ll walk around some of Seoul’s spooky streets, learning about urban legends and more.

Here, you can find Korea putting its own spin on Halloween. During the season, in the evening time, the performers will put on makeup and costumes fitting the theme and put on a show while dressed as popular Korean urban legends. This can be another unique way to enjoy this event while also getting familiar with a folk village.

Where to buy Halloween costumes and decorations from?

At least in Seoul, you have a few options from where you can find costumes for Halloween. Finding costumes may be slightly tougher, but finding decorations for Halloween should be quite easy at one of these stores.

Daiso: Any of this chain’s stores is exceptional for Halloween decorations.

If you are not American, how does your country celebrate Halloween? How much does it differ from Korea? If you are an American, does this sound like a fun alternative way to spend Halloween while you’re away from home? Let us know in the comments below!

There’s also another holiday celebrated in Korea in October. It is called Hangul Day, which you can learn more about in this article!