How to Say ‘Have A Nice Day’ in Korean

Greetings are used every day and are a very useful thing to learn when starting a foreign language. Even if you can’t speak somebody else’s language, you can at least show your politeness by learning some simple greetings. As well as learning ‘hello’, ‘nice to meet you’, and ‘goodbye’ in Korean; you may want to know how to say ‘have a nice day’ in Korean.

We’ve got you covered! We’ll explain the ins and outs of the phrase so you can put it to good use. Let’s get started! 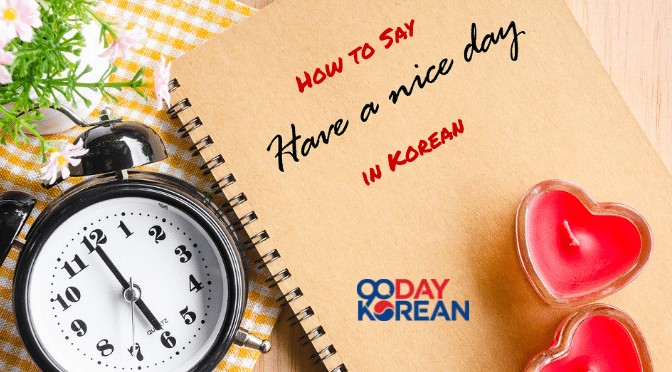 ‘Have a Nice Day’ in Korean

The phrase ‘have a nice day’ is not used that often in Korea, especially compared to how frequently it is used in other countries. Often another greeting such as 잘 가세요 (jal gaseyo), which literally means ‘go well’, is used instead. In other cases, just saying ‘goodbye’ is sufficient as the Korean word for ‘goodbye’ implies that you wish somebody a good day.

If you want to specifically wish somebody a good day then you can use the phrases in this article. However, in most situations, a simple ‘goodbye’ will suffice. 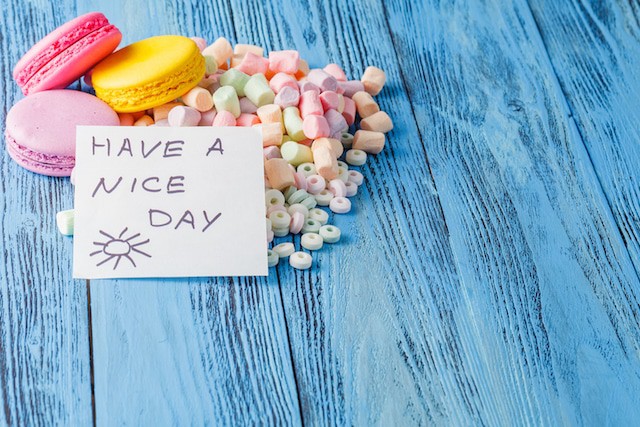 There are three expressions that you can use to say ‘have a good day’ in Korean. Two of them use the word 하루 (haru), which in this expression can be translated as ‘day’. However, be careful using this word in other situations as its literal meaning is ‘one day’. If you want to say ‘two days’ then saying ‘이틀 (iteul)’ would make absolutely no sense at all.

Two of the phrases use the word 좋은 (joeun), which means ‘good’. It comes from the descriptive adjective 좋다 (jota). Sometimes this word may be replaced by 즐거운 (jeulgeoun), which means ‘pleasant’ or ‘enjoyable’.

The phrase 잘 보내다 (jal bonaeda) can be used when saying ‘have a good day’ in Korean. It can also be used in order to say things like ‘have a good weekend’, or ‘have a good vacation’, as shown in this article’s examples.

Formal ‘Have a Nice Day’ in Korean 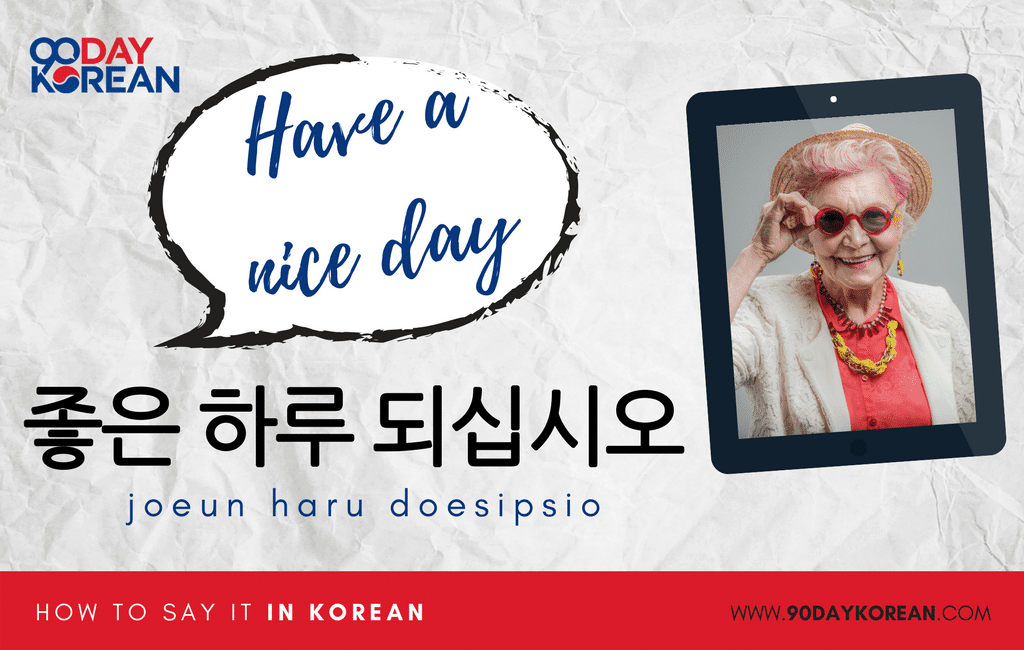 Formal Korean is often used in presentations, interviews, or other situations where you are talking to a group of unknown people. Some of these phrases sound a bit unnatural in such group situations as you usually would normally wish an individual a good day.

Standard ‘Have a Nice Day’ in Korean 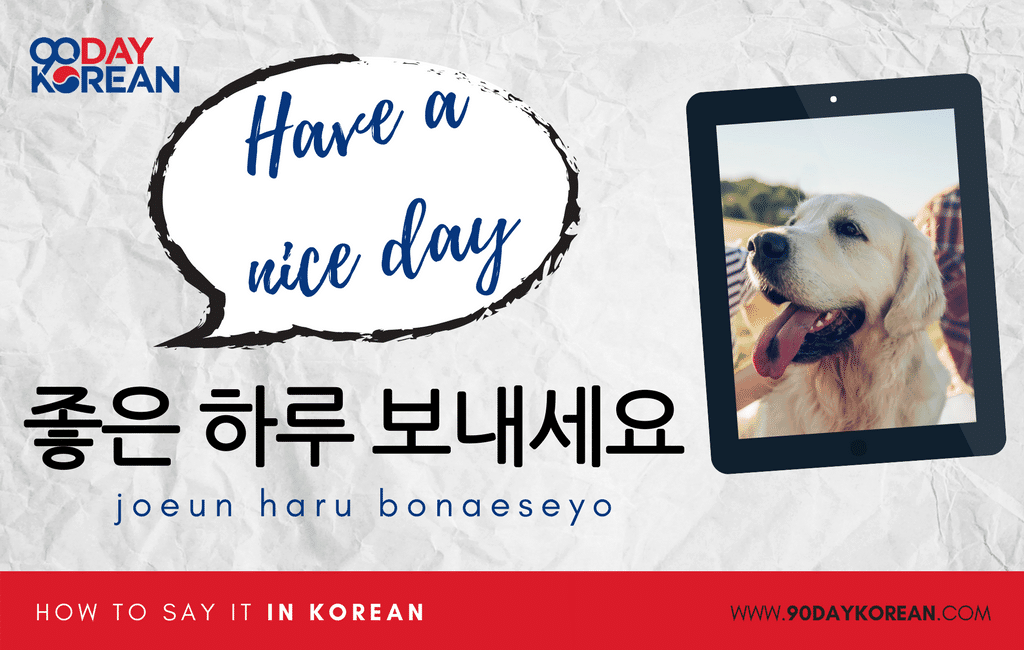 Standard Korean can be used with people who are older than you or who you are not that close with. Note that when you say the phrase ‘Have a nice day’, you are asking somebody to do something, and therefore should include 세 (se) in order to be polite. If you just say 보내요 (bonaeyo), then it is possible for some people to think that you are not being polite enough.

Have a good weekend.

Have a good day at the beach.

Informal ‘Have a Nice Day’ in Korean 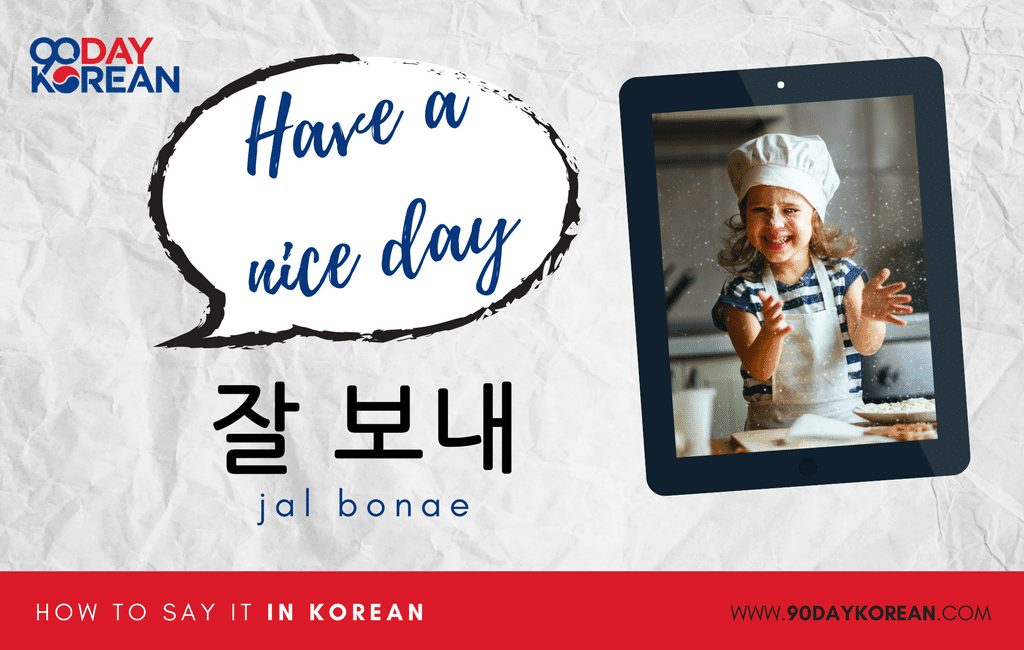 You can only use informal language with people who you are close to, and who are of a similar age or are younger than you. You might say this to a close friend, sibling, or classmate.

Have a good vacation.

Bye darling, have a nice day.

A Word of Caution About Romanizing Korean

Romanization may at first appear useful, but in fact you will improve your Korean at a much faster rate if you take the time to learn to read the Korean alphabet. Learning the alphabet, known as ‘Hangeul’ can help you improve your pronunciation and identify different parts of words more easily. The Korean alphabet is very easy to learn, and you can master it in just a few hours. If you want to take your Korean study up a notch, why not try our full Korean course?

Now that you know how to say ‘have a nice day’ in Korean, use your ability to greet people and make some new Korean friends.