How To Say “How Do You Say…” in Korean

In this article, we will teach you how to say “How do you say…” in Korean. A major way to enhance your Korean learning is to actually use Korean as much as possible. 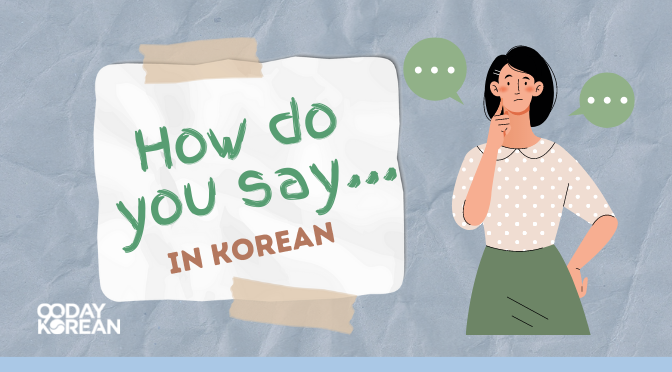 There is no way of getting around that! Whether it’s reading, writing, speaking, or listening, it truly is “practice makes perfect.”

Ways to say “How do you say…” in Korean

So how would you say this in Korean? The beginning of the phrase is dependent on what you are asking about, but you have two options for the ending.

This Korean phrase, 어떻게 말해요 (eotteoke malhaeyo?), is one way of asking how to say a word or a sentence in a certain language.

You can add this phrase after the word that you want to know how to say in a language such as Korean.

You can also use 어떻게 말하죠? (eotteoke malhajyo) to ask how to say a word or sentence.

How do you say “happy” in Korean?

How do you say “I’m hungry” in French?

How do you say “good morning” in Korean?

How do you call or say “airport” in Korean?

How do you say lake in Japanese?

The word for “this” in Korean is 이것은 (igeoseun).

If you do not include the actual word or phrase in the sentence, you would start with 이것은 (igeoseun) or 이것을 (igeoseul).

Both words mean “this” in English. Then you will add the word for the target language, attaching 로 (ro) to it. Otherwise, you can just say the phrase or word and use the phrase you just learned directly.

How do you say this in Spanish?

Why is it important to learn “How do you say…” in Korean?

Learning this phrase can make asking for specific Korean words way easier. Understandably, if you are only just starting your journey of learning the language, it may be difficult to use or understand more than a few words at once.

However, once you have studied your way at least to an intermediate level, it will get easier to use Korean in a variety of ways. One cool way to enhance your learning is to ask for the meaning of Korean words and phrases in Korean!

Alternatively, learning this sentence in Korean will also make it easier to help your Korean friends learn your language, as you can now understand when they ask you this question!

Vocabulary used for “How do you say…” in Korean

To help you remember the topic better, we’ve listed the most used words in this lesson.

어떻게 (eotteoke) means “how” in Korean. Although this is a question word, it is also an expression that you can often hear in K-dramas.

We also have a separate article that talks about question words like “how” in Korean listed at the bottom of this article.

말해요 (malhaeyo) is an action word that means “to say” or “to speak” in Korean.

Other resources on “How to say” in Korean

Now that you know “How to say…” in Korean you can ask your Korean friends how to say anything! If you’d like to learn how to say specific words, we have some of these articles that cover them below.

What other word or phrase would you like to know how to say next? Let us know in the comments below!