How to Say “I Don’t Know” in Korean

However, there will always be times when we don’t know the answer to something. In those cases, it’s best to tell the truth and say, “I don’t know.” The other person will respect your honesty! 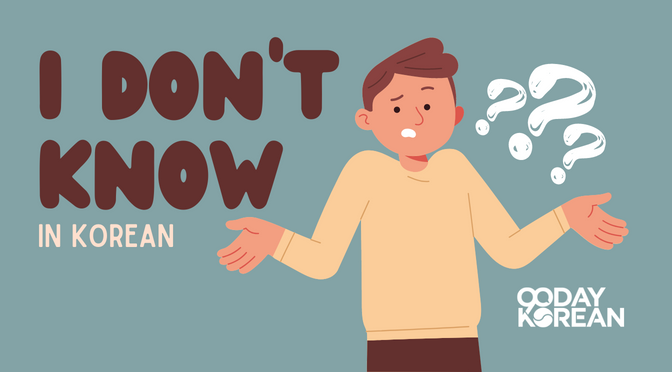 What is the Root Verb for “I Don’t Know?”

Before we head on to the different ways to say “I don’t know” in Korean, let’s first learn about the verbs that we’ll be using. There are two verbs that we’re going to compare today. They are opposites: One is quite knowledgeable, and one is ignorant.

Although we always like to look on the bright side, we’re mainly focusing on 모르다 (moreuda). However, it’s always good to know about the existence of 모르다 (moreuda)’s smarty-pants counterpart!

How to say “I don’t know” in Korean

Now we know the verbs that we need to use, we can look at how these verbs are conjugated depending on the level of formality that we are using. Here’s a quick video about how to say “I don’t know” in Korean.

Formal “I Don’t Know” in Korean

We will start with the most formal version. Here’s how to say “I don’t know” in Korean when you speak with strangers and people older than you.

This expression uses the formal ending -ㅂ니다 (-ㅂ nida). This usually is used when speaking to an unknown audience or if you are required to be very formal.

The two above expressions are interchangeable. The 겠 (get) part of the first expression appears in many phrases. It shows that the speaker intends to do something or is making some assumptions. It also appears in some fixed expressions, especially the verbs “to know” and “to not know.”

There are three different ways to say “I don’t know” in Korean in its standard form.

The first standard way to say “I don’t know in Korean” is 몰라요 (mollayo). Here’s an example sentence:

You can interchangeably use the three regular ways of saying “I don’t know” in Korean. However, the 잘 (jal) sounds a little bit more polite.

Usually, this verb is used to answer questions that include either 알다 (alda) or 모르다 (moreuda) in them.

Lastly, below are the two ways to say “I don’t know” in Korean informally.

When speaking with close friends, you’ll often use informal Korean. It’s more comfortable and simpler and helps you develop a more intimate relationship with the other speaker.

When saying the informal version of “I don’t know,” this is the same as the standard Korean form but without the 요 (yo).

Lastly, another informal way to say this phrase is 모르겠어 (moreugesseo). This is quite similar to the standard version 잘 모르겠어요 (jal moreugesseoyo), just without 잘 (jal) and the ending 요 (yo).

Hopefully, this lesson has given you a better understanding of saying “I don’t know” in Korean. If you don’t know the answers to Korean questions like why, when, how, who, where, which, or what, then you can simply say 몰라요 (mollayo).