How to Say ‘I Don’t Understand’ in Korean

You might already know some Korean, but there might still be many situations where you can’t understand what the other person is saying. It may be because they are talking too fast, they are really old or really young, or perhaps the vocabulary they are using is just that difficult. Wouldn’t it be nifty to know how to tell them you don’t understand what they just said?

The most popular way to express understanding what someone’s saying is by using the verb 알아듣다 (aradeutda). It combines the words 알다 (alda), which means ‘to know’, and 듣다 (deutda), which means ‘to hear’ and ‘to listen’, making its literal meaning closer to ‘I couldn’t hear what you said’. This verb is often used in past tense.

Another way to express understanding is 이해하다 (ihaehada). The usage of this verb isn’t limited to simply responding to whether you did or did not understand what someone said, but can be used in a variety of situations.

Let’s get into the different ways you can say this phrase. Here we go! 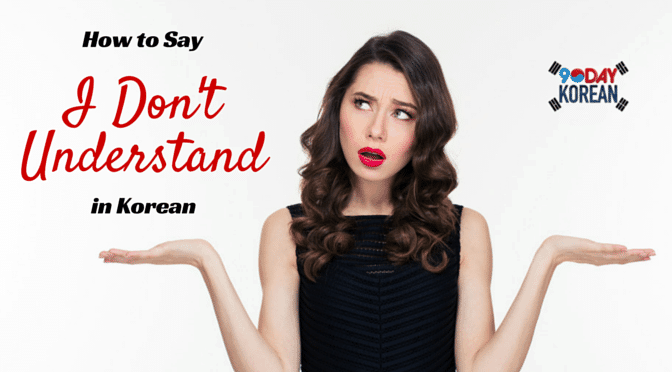 Formal ‘I Don’t Understand’ in Korean

Formal version is usually used with people who are much older than you or several social/workplace statuses above you.

I’m sorry, but I could not understand what you said.

Standard ‘I Don’t Understand’ in Korean

Could you please repeat that one more time? I couldn’t understand what you said.

Informal ‘I Don’t Understand’ in Korean

The informal version is used between people of the same age or younger than you who you are close with.

I don’t understand why our situation became like this.

I don’t understand what you mean.

*Especially this one will be a useful one to know for informal situations regardless of what the topic is.

How to Say "I don't understand" in Korean

Now that you know how to say ‘I Don’t Understand’ in Korean, you can use it to get clarification and keep your conversations running smoothly!