How to Say “I Know” in Korean – Using Arayo and Araso 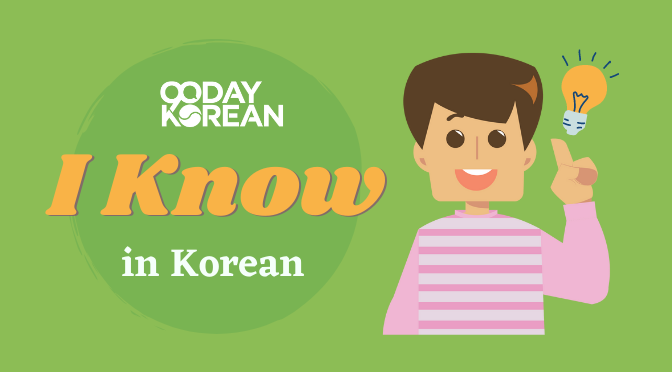 Read on as we will teach you the different ways to say “I know” in Korean!

How to Say “I Know” in Korean

The infinite form of the expression is the verb “to know,” which in Korean is 알다 (alda). To turn it into an “I know,” you need to drop the 다 (da) and attach the proper conjugation depending on which level of formality the expression will be used.

Below is a guide on how to say “I know” in Korean, with examples of each level.

Formal “I Know” in Korean

When you want to say “I know” in Korean when speaking to native speakers older than you, or someone you’re not familiar with, you can refer to these words.

The first one is the formal conjugation –ㅂ니다 (-ㅂ nida) simply attached to the base of the verb “know,” 알 (al). As part of the group of verbs with the stem ending in ㄹ, the ㄹ disappears when the ㅂ gets attached as part of the conjugation.

However, as the ㅂ is followed by ㄴ, it will be pronounced with an ㅁ-sound instead. You won’t hear 압니다 (amnida) being spoken much outside of presentations and equivalent situations, though.

Do you know this person?

알고 있습니다 (algo itseumnida) has a very similar meaning, however, with this type of conjugation, you are trying to convey that you know the topic you are currently discussing in a deep manner. It sounds more natural to use in speech, however, than 압니다 (amnida) does. 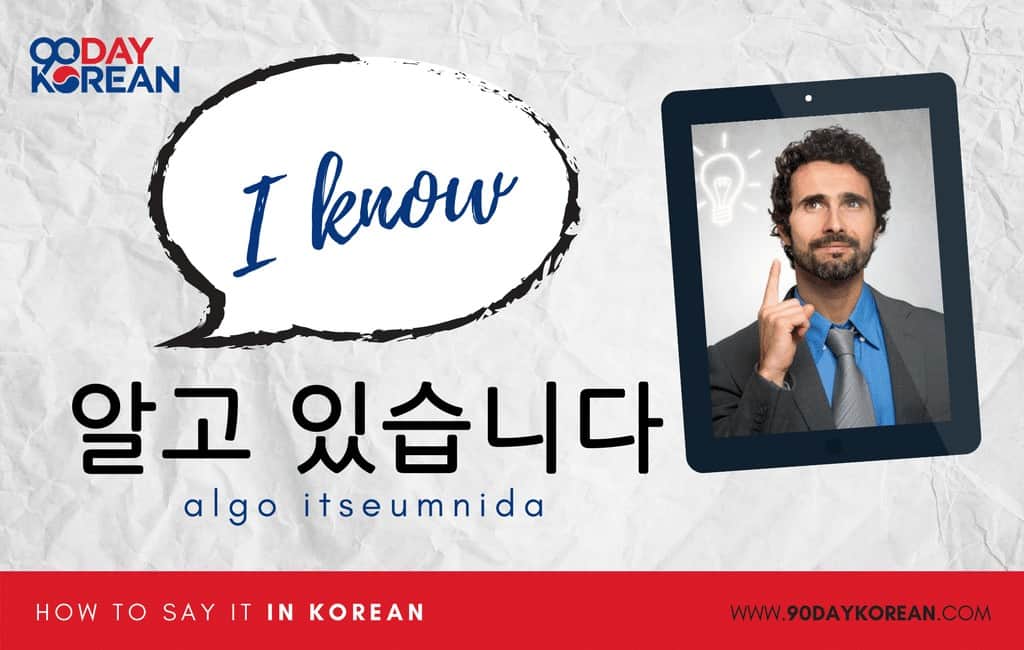 알겠습니다 (algetseumnida) can also be used as an “I know” response in some situations, but often its meaning is closer in alignment with that of “I got it” rather than “I know”, so keep that in mind before using it.

Do you know this person?

Yes, I do know this person.

Standard “I Know” in Korean

Here are some standard ways of saying “I know” in Korean that you’ll hear most often.

Also, notice that when the consonant ㄹ is followed by a vowel, in this case, ㅏ, the pronunciation of the letter is closer to an “r” as opposed to “l.”

Do you know this book?

Yes, I do know this book. 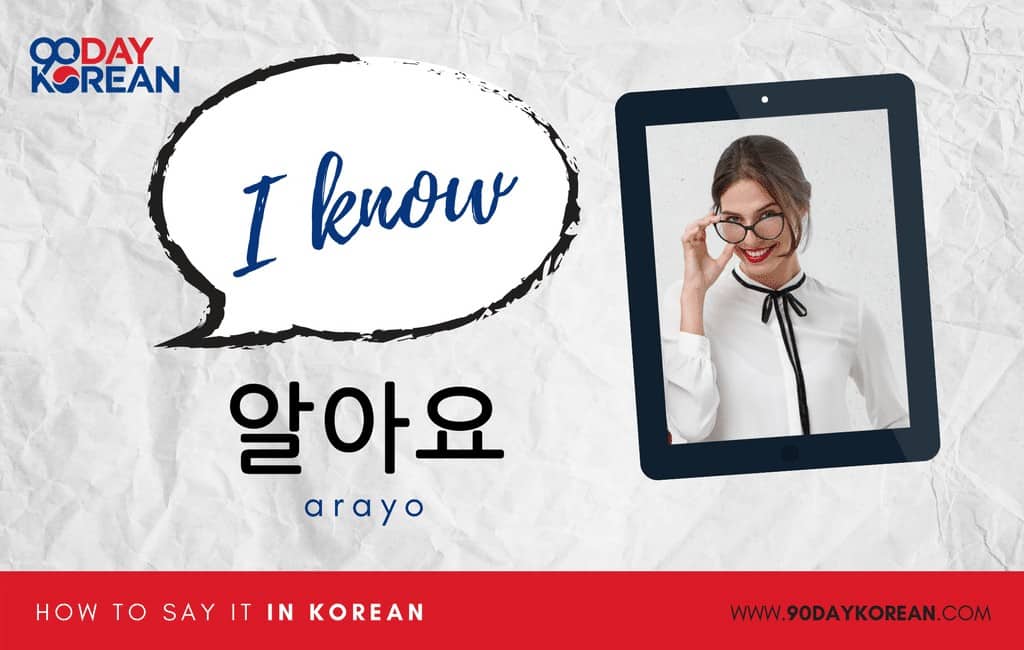 Another standard way of saying “I know” 알고 있어요 (algo isseoyo). In this case, since ㄹ is followed by another consonant, it will be pronounced as “l” instead of “r”.

Informal “I Know” in Korean

Once you’ve become close to the person you are talking to, you can drop the 요 (yo) and speak informally like this.

The informal way of saying “I know” in Korean is 알아 (ara). Note that you have to be careful if you speak to a stranger or a much older person (without getting their permission) using informal words because you’ll likely offend them.

However, to a close friend or equivalent, they’ll be delighted to have you use the informal version. 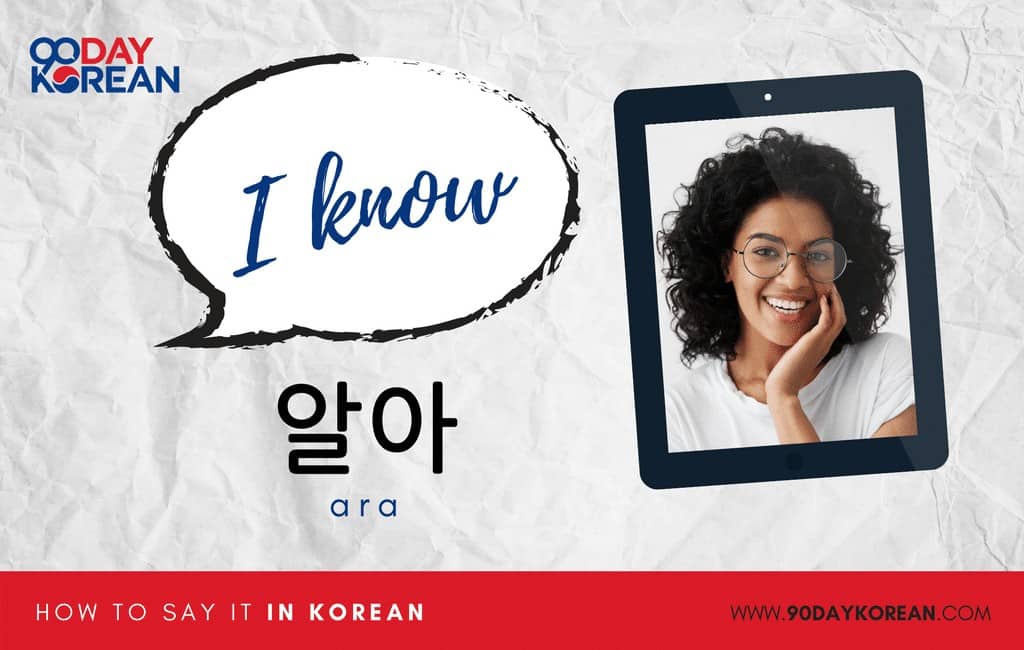 You know this movie?

Now you know how to say “I know” in Korean! To further your knowledge of the verb 알다 (alda), here are some other similar usages of the word that might come into use soon.

“I got it” in Korean

You can say 알겠어요 (algesseoyo) or 알겠어 (algesseo) to convey that you understood or you got what the other person was saying.

Did you understand what the teacher said? 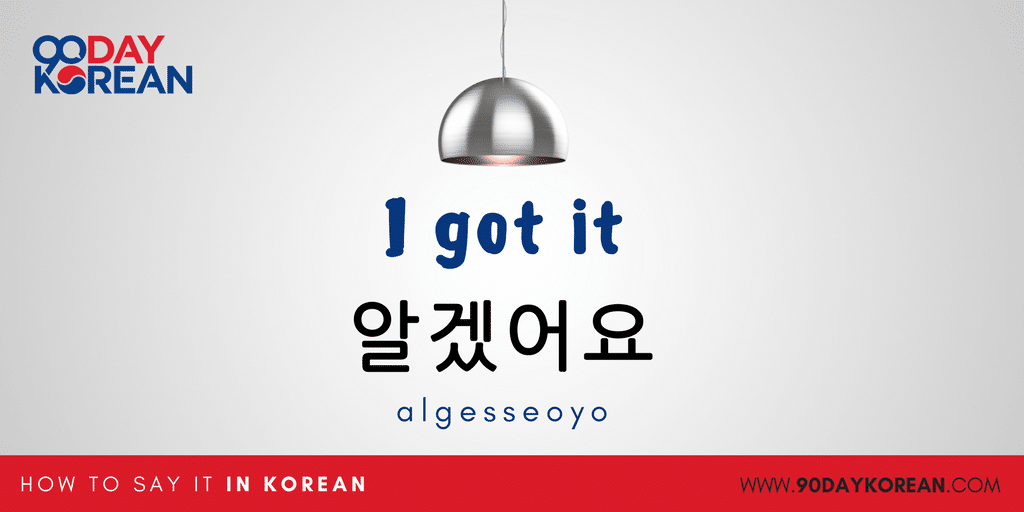 Like the word above, 알았어요 (arasseoyo) also has a meaning close to saying that you understood what you just heard. It can also simply be used to mean “Okay.”

The word “araso” can also be used to express that you understand what the other person is saying. It is written as 알았어 in Korean so it is also often romanized as “arasseo.” This is an informal way of saying “okay” or “I know” in Korean.

Now that you know how to say “I know” in Korean, go out and tell people about what you know! You can also mix this up with other Korean words or phrases.