How to Say “I Miss You” in Korean

It’s time to speak from the heart! Today, we’re going to explain how to say “I miss you” in Korean. This will be a useful phrase to learn to express to that special someone that you want to see him/her.

This phrase is most often used by spouses and those in romantic relationships to show feelings of missing that person. You can even hear it in Korean dramas or K-pop songs. Though it can be a bit tricky if you aren’t familiar with the informal, standard, and formal versions of Korean. 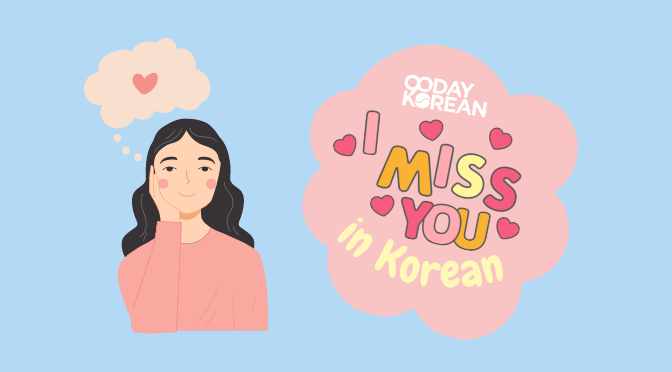 The reason why “I miss you” in Korean can be tricky is that this phrase is usually used by those close to each other, so you won’t often hear all of the possible forms. This is a similar situation that you’d see with Korean love phrases.

Not to worry, though; we’ll fill you in on what you need to know!

How to say “I miss you” in Korean

There are different ways of saying “I miss you” in Korean, depending on who you are talking to.

We’ll explain it in detail below and when to use it. The phrases are written in English and Korean. If you don’t know how to read Korean, you can learn the Korean Alphabet here.

To start, here’s a video on how to say “I miss you” in Korean in different ways. Each way will be discussed further in this article.

How to Say I MISS YOU in Korean | 90 Day Korean

If you learned something from this video, don’t forget to subscribe to our YouTube Channel for other useful videos on learning Korean!

Informal “I Miss You” in Korean

You can turn this expression into a question by changing its intonation upwards at the end. 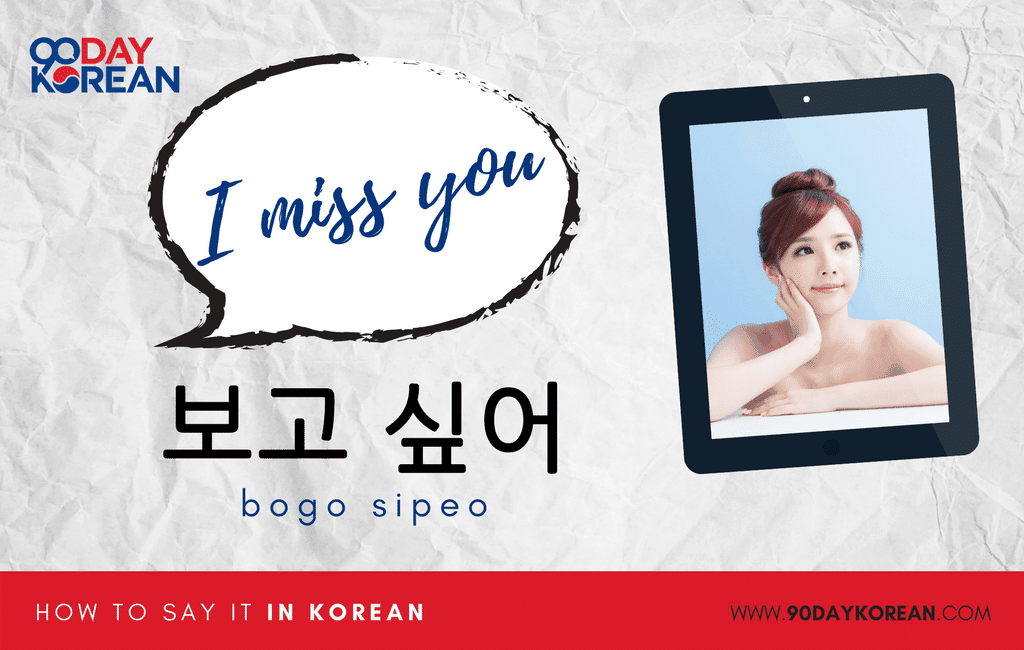 Use these expressions with your partner or close Korean friends since these are the people you are most likely to miss. It’s better to use the informal version of “I miss you” in Korean with spouses rather than the formal language or standard versions since the informal shows more of a degree of closeness.

Standard “I Miss You” in Korean

This is the same as the informal expression but with 요 (yo) on the end of it. You can use this expression with most people. However, just like in English, it is a bit weird to say “I miss you” to someone you’re not very close with. 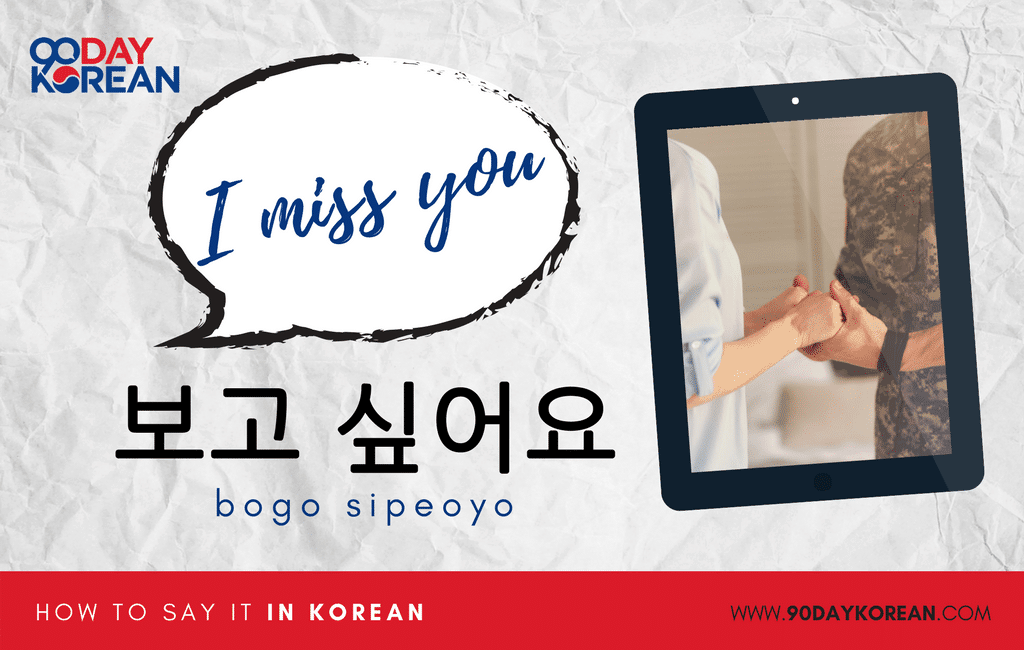 It’s possible that you might talk with someone about someone you miss, and you’d use the standard form. For example, if you were talking to a classmate with who you weren’t close, you might say 가족이 보고 싶어요 (gajogi bogo sipeoyo | I miss my family).

Formal “I Miss You” in Korean

You can use this formal version of the expression if you need to be very formal or polite. However, it’s not used often. You might hear it in Korean songs or during a speech. 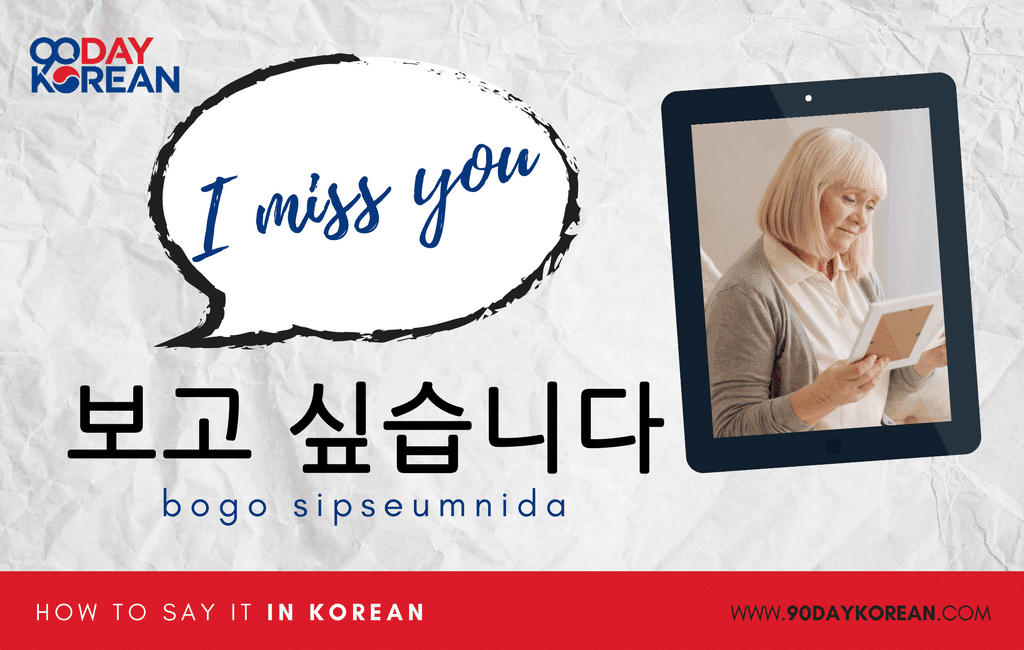 For example, someone giving a speech to a large group might say 부인이 보고 싶습니다 (buini bogo sipseumnida | I miss my wife).

Other useful phrases related to “I miss you” in Korean

Here are other ways to express how you miss someone in Korean.

“I missed you” in Korean

You can say “I missed you in Korean” as 보고 싶었어 (bogo sipeosseo).

The “I” here is implied. Also, keep in mind that this sentence is informal.

“See you soon” in Korean

If you miss someone, you’ll likely want to see them. With this, you can say “see you soon” in Korean as 이따 봐요 (itta bwayo).

“I miss you so much” in Korean

The word 너무 (neomu) means “so much.” For the sentence above, 너무 (neomu) was used to add emphasis.

Therefore, it is translated in Korean as “I miss you so much.”

“I miss you too” in Korean

If someone tells you they miss you and you feel the same, you can say 나도 보고싶어 (nado bogosipeo). This means “I miss you too” in Korean.

“I will miss you” in Korean

To express that you will miss someone who hasn’t left yet, you can say 보고 싶을 거야 (bogo sipeul geoya). Another common way to say this 그리울 거야 (geuriul geoya). These are the standard ways of saying “I will miss you” in Korean.

As you are most likely to say “I miss you” to your boyfriend or girlfriend, there are some cute expressions that you can use instead of the informal 보고 싶어 (bogo sipeo).

Adding the “ng” sound is common when using aegyo. You can add it to 보고 싶어요 (bogo sipeoyo) to make it sound cuter.

This is another cute way of saying “I miss you.” You can make it even more aegyo by adding an “ng” to the end of it to make 보고팡 (bo-go-pang), probably followed by some cutesy body language (or emoticons if texting).

If you want to mix up your cuteness, add the ㅇ at the end of 보고 싶다 (bogo sipda) to make 보고 싶당 (bogosipdang).

How to say “miss” in Korean

The word “miss” can have several meanings. Below are other Korean verbs that translate to “miss” in English.

If you are wondering how to say “I miss you” in Korean and you look in the dictionary, then you will likely come across the verb 그립다 (geuripda).

Although this word does mean “to miss,” it isn’t used that often in spoken Korean.

그립다 (geuripda) can be used if you want to say that you miss a non-human thing or situation.

Instead of 그립다 (geuripda), the expression 보고 싶다 (bogo sipda) is used when people want to say “I miss you” in Korean.

보고 싶다 (bogo sipda) literally means “I want to see.” It is made up of the verb 보다 (boda | to see) and the suffix -고 싶다 (-go sipda), which expresses the idea of wanting to do a particular action.

Even though “보고 싶다 (bogo sipda)” literally means “to want to see,” it also means “I miss you.” If you want to say “I want to see,” then you will use this expression too. Therefore, you need to listen carefully and judge the situation when translating this word. Whenever talking about missing a person, use 보고 싶다 (bogo sipda).

If you want to say something like “miss the bus,” then you should use the verb 놓치다 (nochida). For example, you might say, “버스를 놓쳤어요” (beoseureul nochyeosseoyo | I missed the bus).

If you liked this and want to learn more about Korean, go here to get some fantastic resources. On that page, you can find everything from greetings to sentence structures. We also have a structured program that teaches you how to have a 3-minute conversation in the first 90 days.

Hopefully, you now know how to say “I miss you” in Korean. Now go out and practice this expression with someone important to you. Not only will you get some Korean practice, but you’ll also make their day!