During summer, it’s sweltering hot all over Korea. At times like these, you’re in need of something refreshing.

Luckily, we’ve got just what you’re looking for!

Below, we’ll cover the best ice cream places in Korea. 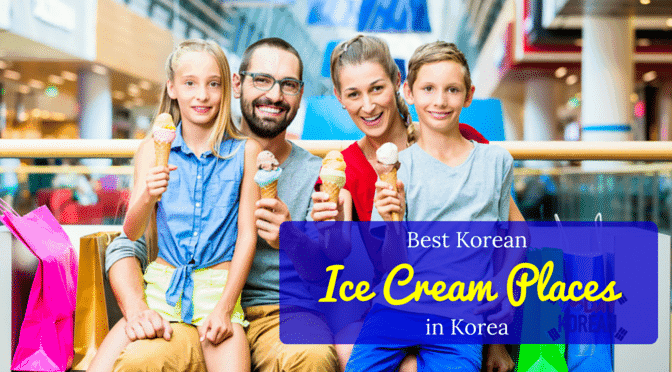 You might have already tried out several different kinds of convenience store ice cream bars, but wouldn’t you also like to know which shops offer the most delicious ice cream in Korea, especially in the Seoul area? After all, ice cream is a popular summertime dessert in South Korea as well.

Forget about Baskin & Robbins, here’s the perfect guide for you for finding the best ice cream in Korea, whether you are here as a tourist or a long-time Seoulite! It’s always fun to learn about the hidden delights of South Korea.

Softree’s honeycomb ice cream consists of soft vanilla ice cream, combined with honeycomb on top. You can either eat it just as is, or mix the ice cream and the honey together for an upgraded dessert experience. Although Korea has since then moved onto other food trends, many ice cream places still serve ice cream with honeycomb today.

Fell + Cole has spread as a chain to many different locations in Seoul, and perhaps other parts of Korea as well, but initially it was just a small ice cream shop in Hongdae. What made it different from others was not only its quirky selection of ice cream flavors (including even makgeolli-flavored ice cream!), but the fact that they change the selection available on a daily basis. Not only is the ice cream from Fell + Cole tasty, but their business model ensures you will never have a dull dessert experience with them!

Even in the dead of winter, there are still people lining up to get the super affordable, giant ice cream cone off the streets of Myeongdong. The texture of the ice cream isn’t as soft as Softree’s and it pales in comparison to other ice cream shops with its small selection to choose from. However, this bargain ice cream is definitely worth experiencing at least once!

This little chain, which you can find at least in Hyehwa and Insadong, specializes in ice cream macarons. They are colorful, affordable, and tasty. You are allowed to choose your own combination from the different macarons and ice cream flavors available. It is quite easy to spill it on yourself, so grab plenty of napkins!

King’s Cream’s red velvet ice cream is likely the least famous addition on this list, though by no means the least tasty one. Unlike many other shops mentioned here, King’s Cream operates only from one small location, in between Cheonho and Gangdong. There are several different additional toppings to choose from to mix your red velvet ice cream with, each one as delicious as the next!

Want to know what the current rage in Seoul is when it comes to ice cream? It’s this little ice cream shop in the center of Hongdae specializing in tiramisu ice cream! Since its inception earlier this year, they’ve opened up another small shop in Lotte Department Store in Myeongdong. However, all the cool kids want to visit the original one. Prepare to wait in line for a good while before getting yours, and then spending the rest of your afternoon happy that you did!

We gave you some great spots to start with, but the list of best Korean ice cream can’t simply end here! Although these ones didn’t quite make the cut, they’re still worth a visit. After you’ve already tried all the other places on this list, cool down this summer with these ice cream options:

This was the craze back in just 2014. Monster Lab in Hongdae was the front runner in creating all sorts of intriguing and delicious ice cream eating experiences with the quirky element of adding nitrogen in the making of ice cream. As is typical in Korea, once the trend took wind, several other ice cream shops with similar menus and tactics started opening up. While the craze has long since died down, you might still be lucky enough to find one of these shops open.

Just reading the name aloud will give you quite the sugar rush, but, trust me, it’s worth it! As it’s technically more of a frappe than an ice cream, it’s been placed in the list of honorable mentions. The base of this dessert is the mint choco frappe. On top of that, there’s a big scoop of whipped cream, further topped off by vanilla ice cream and choco chips, surrounded by several different flavors of macarons – all of which you can choose yourself!

It’s a popular but still fairly small chain from where you can find an interesting variety of not just ice cream, but also different kinds of shakes. Just like Coffeenie’s frappe, they are likely to induce quite the sugar high, but at least you’ll go down smiling and happy from all the deliciousness.

If you happen to be visiting Garosugil, stop by one of its backstreets, namely the one right by Skinfood, to find this small ice cream shop selling all sorts of wacky ice cream desserts. If you’re feeling adventurous, give the one with a huge cotton candy cloud a try!

If you’re still hungry for ice cream in Korea after all this, don’t worry, there are even more icy treats available all over Korea than what was listed on this list. Now go on and get your tummy full of yummy!