Korean Independence Movement Day or the March 1st Movement Day is a national holiday in South Korea. It’s probably one of the more culturally relevant holidays you need to know about, especially if you’re learning about Korea and Korean culture.

This March 1st holiday is rich in history, so take a walk down Korean culture lane with us, and we’ll tell you all about it! 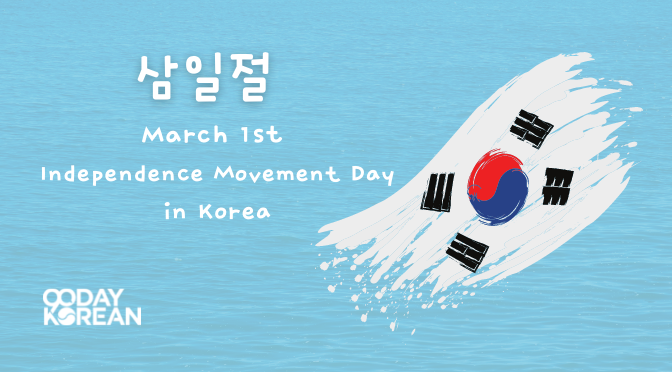 The Korean Independence movement was an ongoing campaign to liberate Korea from Japan since 1910. The campaign reached a high point on March 1st, 1919.

Because of what happened on March 1, 1919,  the holiday’s official name became the March 1st Movement Day or Sam-il Movement Day (literally meaning Three – One or March 1st).

When is the March 1st Movement Day?

As the name implies, the March 1st Movement is celebrated on March 1st every year. This is a public holiday which means most offices and schools are closed to commemorate the day.

On March 1st every year, Koreans celebrate The March 1st Movement Day which is known in Korea as 삼일절 (Samiljeol).

The name 삼일절 (Samiljeol) can be broken into three parts:

The direct translation is “3-1 Festival Day.” This celebration reminds Koreans what happened during the public resistance on March 1st. The demonstrations are also sometimes called 만세운동 (manseundong), which means “Manse Demonstrations.” These protests were marked by mass gatherings in public spaces, which the Japanese military police, of course, tried to suppress.

On March 1st, 1919, 33 Korean Movement core activists read the Korean Declaration of Independence. Following that, over 2 million Koreans participated in over 1500 demonstrations nationwide. Many were arrested, wounded, or killed.

This event caused a lot of change for the Korean Independence movement. Many of the March 1st Movement leaders fled to other countries and continued their activism there. Some activists flew to some parts of China like Shanghai, where the Korean Provisional Government was eventually established.

The March 1st Movement Day was declared a national holiday in Korea on May 24th, 1949.

How Is Independence Movement Day Celebrated in Korea?

This holiday is celebrated by reading the Korean Declaration of Independence from 1919. The reading takes place in Seoul’s Pagoda Park.

태극기 (taegeukgi), the Korean flag, is raised in homes, businesses, and institutions. There are numerous parades, concerts, and exhibitions to commemorate the day.

So there you have it! You’ve now learned one of Korea’s most culturally relevant holidays. Interested in more of Korea’s national Holidays? Check out these articles below:

What will you do to celebrate Independence Movement Day in Korea? Let us know in the comments!