Jobs in Korean – Complete List of Occupations and Titles

In this lesson, we’re going to cover the different jobs in Korean. In other words, you will get a list of the various occupation names in Korean.

This can be very useful when you’re learning the Korean language. For example, when you befriend Koreans or fellow students in your Korean language class, you will likely be asked what your job or dream job is. It’s one of the most common questions you’ll hear when talking with Koreans, so you’ll want to be prepared to answer.

Below is a comprehensive list of some of the most common job titles in Korean. Let’s get to work! 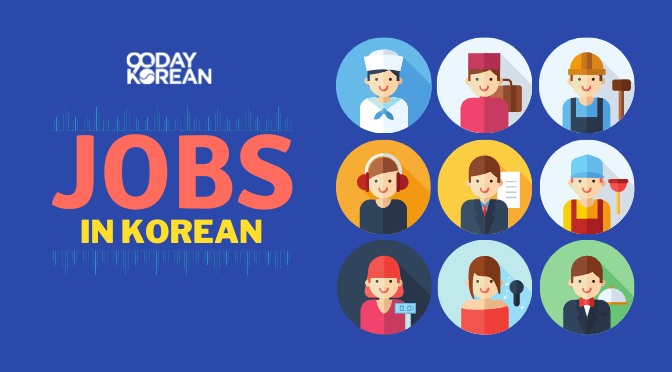 Below is a free PDF guide that you can download and take with you:
Get “Jobs in Korean” Free PDF Guide

The list below shows how to say common job titles in Korean. We’ve arranged them in alphabetical order for you. You can also click the audio icon to listen to how they’re pronounced. If you’re working in the medical industry, the section below is for you. You’ll learn the Korean words for a few of the common jobs in the medical field.

The word “doctor” in Korean is 의사 (uisa).

I feel sick, so I will consult a doctor tomorrow.

A doctor can either work in a hospital which is 병원 (byeongwon) in Korean or a clinic which is 진료소 (jillyoso) in Korean.

Being a nurse is very rewarding.

If you need some dental services, you’ll look for a 치과 의사 (chigwa uisa).

The word “pharmacist” in Korean is 약사 (yaksa). And, the medicine that we get from pharmacists is called 약 (yak).

The pharmacist prepared the medicine as prescribed.

Did you say you need to stop at the pharmacy? 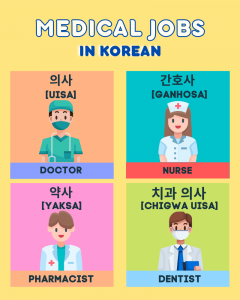 Below are some of the common job titles for those who work under education in South Korea. If you’re a student, this is how you can address your teacher.

“Teacher” in Korean is 선생 (seonsaeng) who teaches students which translates to 학생 (haksaeng). A teacher works in a school which is called 학교 (hakgyo) in Korean.

The word “professor” in Korean is 교수 (gyosu). A professor works in a 대학교 (daehakgyo) which means university.

Schools will be chaotic without a school principal. They hold high responsibilities in making sure everything is working well inside the school. A school principal in Korean is 학교장 (hakgyojang). 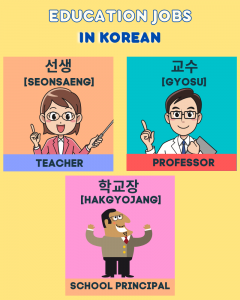 What we see on TV has a huge production team behind it. Some of the jobs included in this team them are listed below.

For many K-Drama and K-movie fans, you’d want to know the Korean word for actor and words related to it.

“Actor” in Korean is 배우 (baeu) while an actress in Korean is 여배우 (yeobaeu). An actor and an actress can be seen working in movies, dramas, or plays which are called as 영화 (yeonghwa), 드라마 (deurama), and 연극 (yeongeuk) in Korean.

There are a few ways to say director in Korean. It depends on which field of work or industry you’ll use it in.

The word director in Korean who directs Korean movies and dramas is 감독 (gamdok).

If you’re referring to an executive director in a company, you’ll use 임원 (imwon).

He’s an executive director at a big company.

My friend is the art director of this movie.

And you can use 단체장 (danchejang) when talking about a director-general.

My job is as a writer. 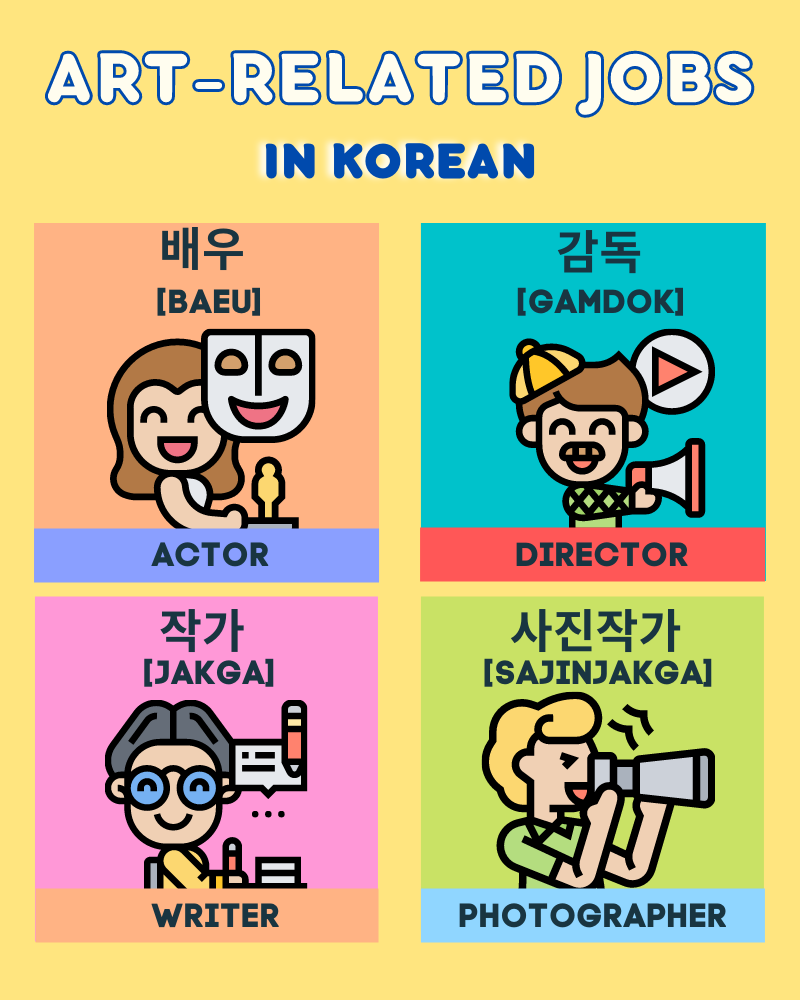 Peace and security in a city are essential and achievable with the help of our law enforcers. Know their Korean terms below.

The words 경찰 (gyeongchal) and 경찰관 (gyeongchalgwan) are used to call the job of a police officer. They report to their work in a police station which is 경찰서 in Korean.

The word judge in Korean is 판사 (pansa). We usually see them work in a courthouse or courtroom which are 법정 (beopjeong) and 법원 (beopwon) in Korean respecitively.

However, the word 심판하다 (simpanhada) is used when you’re referring to the act of judging.

A lawyer in Korean is called 변호사 (byeonhosa). This is the same word used for “attorney.” 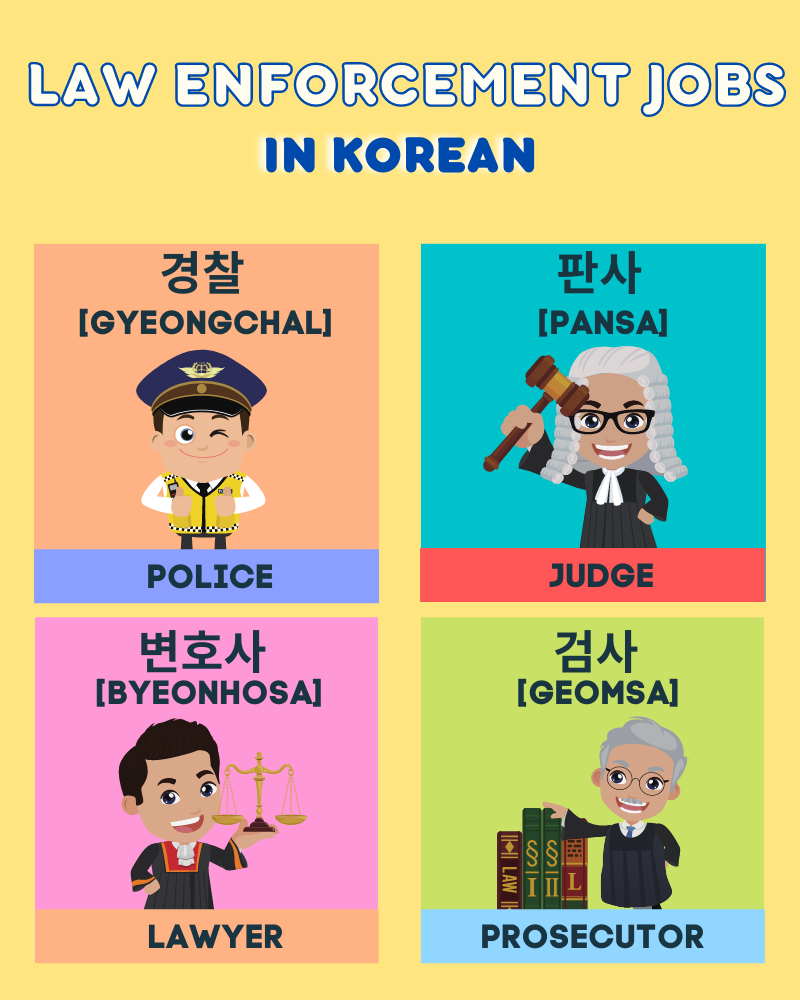 The majority of the people work in an office setup. Take a look at the list below if you also see your job in Korean.

An office is generally called 사무실 (samusil) but it can also be called 근무처 (geunmucheo). A person who works in an office or an office worker is 사무원 (samuwon) in Korean.

The word company is called 회사 (hoesa) in Korean. A person working in a company or a company worker is 회사원 (hoesawon) Korean.

However, the Korean word 회계사 (hoegyesa) is used when referring to the profession of being a certified accountant.

I am an accountant.

Seungho is a qualified accountant.

회계원 on the other hand can be used when referring to both an accountant, a treasurer, or a cashier.

The accountant/cashier is counting the money. 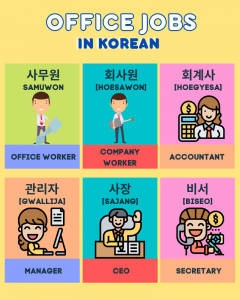 There are a number of ways to say “manager” in Korean. It depends on what field they’re working on.

The word manager in Korean can be expressed as 경영자 (gyeongyeongja) or 관리자 (gwallija) when it’s used for a managerial position in company department.

Mingyu is the manager of the bank.

It can also be expressed as 매니저 (maenijeo). However, this word is usually used for people handling or managing artists or celebrities such as actors, singers and etc.

The word 감독 (gamdok) is also used for the word manager in Korean. This word is used for people who are in charge of a team, particularly a sports team.

A new manager was introduced to the team in the morning.

How to Say “Job” in Korean

As with many other Korean words, there are multiple ways to say “job” in Korean.

This can be used to explain the specific job or task that you do or are doing, as well as your job position in general.

This word only means “job” in the sense of a job position. It is a combination of the words 일 (il) and 자리 (jari), which can mean seat, space, and position. It’s very popular to use when discussing if there are available jobs in the job market, and the like.

This word typically refers to a “job in a company” or “office job” specifically. Thus, when talking with your Korean acquaintances, you may hear this particular word being used a lot if you ask them what their job is.

The usage of this one is specifically limited to the moments where you talk about being in the process of finding a job or having just recently found one.

요즘 취직준비중이야. → These days I’m preparing to get a job.

This is another alternative to say “job” in Korean. You would use this specifically when describing what your job or occupation is.

This Korean word typically refers to a specific job being done and is more often used in arts, architecture, and other similar professions, rather than for office jobs.

How to Say “Office” in Korean

The word “office” can be expressed in a number of ways in Korean. You can say 직장 when you’re talking about your workplace.

You can use the word 사무실 when talking about your office room.

The Korean word 사옥 can also be used when you’re referring to your office building.

You can also use the word 서재 for library in Korean. This is usually used for a library in a mansion or in a big house.

Another word in Korean for “library” is 장서. This is when referring to a collection of books.

The word “career” in Korean is expressed as 경력 (gyeongreok).

Lee Seyoung started her acting career at the age of five.

When talking about a career woman in Korean, you can say it as 직장 여성 (jikjang yeoseong).

There are many career women these days.

There aren’t many people I know who have a break from work.

There are a number of ways to say “professional” in Korean. It depends on the context or on what you’re describing.

You’ll use the word ​​프로 (peuro) if you’re using it to describe athletes or players.

However, you’ll use 전문가 (jeonmunga) if you’re going to use it for people who are experts on something.

The word “profession” in Korean is 전문직 (jeonmunjik). This is used when you’re referring to jobs that are specialized for example doctors, lawyers, engineers, and others.

However, if you’re referring to a vocation, you’ll use the word 천직 (cheonjik).

The word “work” in Korean is expressed in a number of ways depending on whether you’ll use it as a noun or verb.

I have a lot of work at work these days.

I want to quit my job.

The man is working on the computer.

Here is some information about work in Korea.

How to Find a Job in Korea

If you want to get a Korean job, these may be useful places to help start your search:

If you enter a company in Korea, you may notice it is different than in your home country. There is a special language that company employees use to address each other. Here are some resources about that language and Korean work life:

We hope you enjoyed this lesson. For a complete guide on how to learn Korean, check out our resource here: https://www.90daykorean.com/learn-korean/