At 90 Day Korean, it’s no surprise that we love all things Korean, and Korean dramas are no exception! We’re big fans of studying Korean and doing it in a fun and exciting way. Whether studying with television, music, or movies, learning through a medium you enjoy is a surefire way to learn Korean fast! So for that reason, we’re going to start an article series of some of our favorite dramas and words you can look for to supplement your Korean studies while you watch.

So heat your popcorn and grab a pencil because we’re reviewing the 2015 hit drama 시그널 (Shigeuneol) or in English, “Signal. ” Let’s get started! 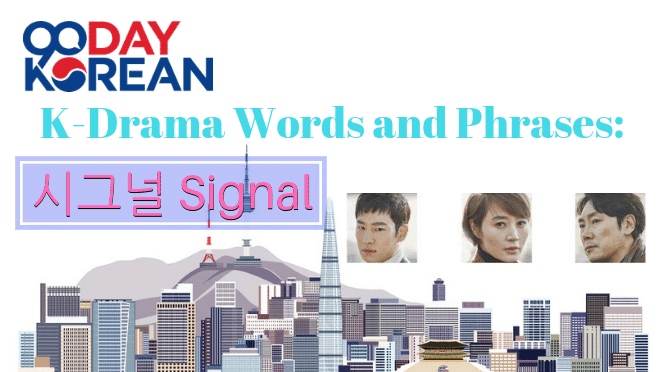 This drama is about 2 case profilers who live 15 years apart. One of the profilers lives in 2015, and the other lives in 2000. They began to communicate through a mysterious walkie-talkie that fell into the hands of Park Hae-young, the profiler living in 2015. As both became linked through the walkie-talkie, they worked together to solve cases that were left unsolved or were questionable and even succeeded in preventing some events from occurring. However, they can’t communicate with each other anytime they want. It’s only time and fate that make the old walkie-talkie work. As they work together to solve and prevent crimes, they will be lead to an even bigger case that they were unaware of.

Why you should watch it

This drama was a big hit in Korea when it aired in 2015. The plot of the drama was something unfamiliar to the Korean audience. It gives the vibe of breaking the barriers of time and dimension. Another factor that had an impact on the drama was the main actors. It was led by Kim Hye-soo and Choi Jin-woong, famous seasoned actors on small and big screens. To add the incredible line-up is Lee Je-hoon, who’s handsome and a skilled actor. This drama also got the title of the highest-rated drama on a cable network having 13% of the viewership. This drama is also has a Japanese remake in the works.

The first episode of this popular drama kicks off with a kidnapping and murder case of a young girl named Yoon-Jung. One of this girl’s classmates happened to have seen her last when she was picked up by a woman wearing red lipstick and high-heel shoes. The young boy didn’t think anything of it as he thought she might be her guardian. To his surprise, when he caught the evening news that night, it was about Yoon-Jung missing. He was even more baffled when the police declared that the prime suspect was a man when in fact, he saw that the person who took Yoon-Jung from school was a woman. He tried telling the police what he saw, but they didn’t believe him. None of the police would hear him out.

This young boy would become a case profiler known as Park Hae-young. He gained a reputation for being a celebrity stalker due to his knowledge of most of the ins and outs of the entertainment industry. He one day meets detective Cha Soo-Hyun who is a very upright veteran in the field. She reminded Park Hae-young that his actions are harming the reputation and dignity of the police force. Also, in this episode, the mysterious walkie-talkie would fall into the hands of Park Hae-young that would connect him to detective Lee Jae-han in the year 2000. As their communication began, Park Hae-young will be led in unraveling the truth behind the case of Yoon-Jung, his childhood friend.

Episode 2 continues with the unsolved case of Yoon-Jung. This time, nurse Yoon, who is now the prime suspect of Yoon-Jung’s kidnapping and murder case, is in the custody of the police and is questioned by detective Cha Soo-hyun. On this day, the statutory limitation on the Yoon-Jung case is about to end. They need nurse Yoon to confess to the crime for it to be solved, and they also need to have strong evidence that would allow them to prosecute her. However, the allotted time for them to prosecute her is winding down. Ultimately they are not able to squeeze out the truth from her. The statutory limitation on Yoon-Jung’s case has now ended, and nurse Yoon confidently walks out from the investigation room. Fortunately, the forensic department calls with findings of evidence that could allow the officers to prosecute Yoon, not for Yoon Jung’s case but another murder case.

As the news on Yoon-Jung’s case breaks, the law on the statutory limitation on cases, particularly homicide, receives many complaints from the citizens. This chaos leads to establishing a cold case squad that will handle the cases that have been unresolved for so many years. The squad will dig into the old cases to bring justice to the victims’ families.

With the establishment of the cold case squad, profiler Park Hae-young and detective Lee Jae-han continue to communicate through the walkie-talkie and help each other solve the cases in their times by providing essential information.

In this episode, the cold case squad with Park Hae-young and Cha Soo-hyun solves the Gyeonggi serial murder case. As the team tries to solve it, Park Hae-young provides Lee Jae-han to help him prevent the serial killer from attacking his next victim.

The Gyeonggi serial murder case occurred when Lee Jae-han was new to his job. During this time, Lee Jae-han liked a girl who worked at a district office. Because of the information Park Hae-young gives to him through the walkie-talkie transmission, he tries to protect the girl he likes.

In the present time, the squad tries to go back to points that could have been missed by those who investigated the case in the past. However, as they are tracing down the serial killer’s path, they are not told by the section chief that this cold case should be handed over to the Gyeonggi department. This infuriates the cold case squad, particularly Park Hae-young.

You’ll be hearing a lot of Korean words when watching Signal. If you want to watch this series without subtitles, you’ll have to learn Korean fast. We have a fantastic program that will help you learn Korean fast and efficiently. You’ll be able to have a 3-minute conversation in just 90 Days! You can find out more about the 90 Day Korean Membership program here.