In this article, we will teach you all about Korean abbreviations. 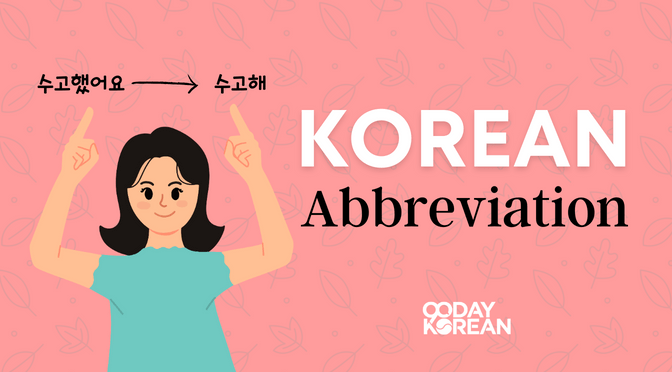 You’ll often hear an abbreviation used in informal conversations between friends or people close to each other in South Korea. You might have also encountered some of these terms in Korean dramas. By learning one Korean abbreviation at a time, you’ll also learn more about Korean conversations.

In addition to these shortened Korean words, learning how to say LOL in Korean can prove to be crucial to you as well.

What are Korean abbreviations?

The word “abbreviation” is essentially an alternative way to refer to shortened words. If you are a regular user of the Internet and social media, and text messaging in general, you may be quite familiar with numerous English language abbreviations, such as LOL, BRB, IIRC, and so on, along with Korean text slang.

Above, you’ve already come across some shortened words, which can be regarded as Korean abbreviations, as well. Below we’ll learn even more abbreviations; with them, you’ll get to master Korean texting slang words in no time, even if you’re no expert in the language yet.

Below you can find the most popular and common abbreviations you’ll absolutely want to memorize for the future. They’ll be fun and useful to use together with popular shortened words in Korean.

Following the list above, here are some Korean abbreviations commonly used by Korean native speakers.

Although 하이 (hai) itself is already a short, simple, and sweet way of saying “hi” in Korean, Koreans like to shorten it even further, turning it into ㅎㅇ among friends. Parts of this are because, as mentioned above, Koreans like to make words sound “cuter” than how they were originally presented.

Much like with “hi,” it’s also common to abbreviate “bye” at the end of the conversation. In this case, the original word is longer but is also already a cute way of saying “bye.” It’s considered perfectly friendly to use the shortened form, especially if you’re in a hurry. ㅂㅇ will do, also.

Perhaps because the full word for “thank you” in the Korean language is 감사합니다 (gamsahamnida), it is simply easier to abbreviate as ㄱ ㅅ, shortened from 감사 (gamsa), in texts messages.

Of course, this is a majorly casual form of thanking someone and should only be used in corresponding situations. Think of it as the abbreviation “ty,” basically.

The expression for “Happy birthday” in Korean, 생일축하해 (saengilchukahae), is one that has many ways to be expressed through text. If the person is close to you and the full regard is too long to write, ㅅㅇㅊㅋ is perfectly fine as well. Notice that the ㅋ stands in place of both of the ㅎs.

You can also write 생일ㅊㅋ if you feel the abbreviation alone looks too lazy. Alternatively, many Koreans also simply write 생축 (saengchuk) to wish someone a happy birthday.

Additionally, ㅊㅋ, which is short for 축하해 (chukahae), can be used on its own to congratulate your close friend in any situation.

This is a perfect way to express yourself when you want to say that something is really fun and a simple 재미있다 (jaemiitda), or its shortened form 재밌다 (jaemitda), just isn’t powerful enough for it.

존나 (jonna) itself is a Korean slang word, and a rather vulgar one at that, so be careful not to use it on its own. Meanwhile, 노잼 (no jaem) works as the antonym for 존잼 (jonna).

Although the official word for “no” in Korean is 아니요 (aniyo), Koreans also love to use the more English-sounding and cutesy 노노 (nono) to get the point across. And, of course, when typing quickly, this already short word turns into an even shorter ㄴ ㄴ.

Naturally, where there’s an abbreviation for “no,” there’s also one for “yes” in Korean. 응 (eung) is the most casual way of saying “yes,” which is appropriate to use during casual conversations among friends.

In text messages, though, it is almost always shortened as a sweet, quick, and cute ㅇㅇ.

Looking similar to the Latin alphabet version of OK, ㅇㅋ is a popular way to express “okay” during text message conversations in Korean. It’s wonderfully simple and easy to understand.

In all cases, ㅈㅅ is informal and is only appropriate among close friends, and even then, its use is limited to when you can be cute and quickly apologize for a small thing. Using this to apologize for a big matter, however, would likely not go over well.

This is essentially the Korean equivalent of “IDK,” when saying “I don’t know, “and you can use it in precisely the same way. The same rules apply as with other abbreviations: only use this with close friends.

Here’s another abbreviation coming from a short phrase that has been taken from the English language and morphed into a Korean term to use.

Most typically, this – or at least the abbreviation – is used when you want to suggest or coax a close friend or a significant other to come out with you for some fun times.

When someone has worked on something hard and can be seen as having gone through much trouble to accomplish something, they can be celebrated with the phrase 수고해 (sugohae) or 수고해요 (sugohaeyo) when a higher level of politeness is required.

Among close friends, via text, you can always quickly acknowledge them for their efforts with the abbreviation ㅅㄱ. It can also be used to mean “Take it easy” also after someone has worked hard on something.

Below you can find example dialogues that can help you see these abbreviations in action.

Here is the English translation of the dialogue above.

A: Wow, today I did nothing but homework for 4 hours.

A: My head really hurts.

Add in some basic Korean slang words, and you’ll be wowing your Korean friends the next time you text them! You can learn about the most common Korean slang terms in this article. You can also use Korean exclamations in your chats to look super texting savvy.

In the meantime, perhaps you’d like to support today’s studies by learning a little about how to read Korean faster. Try using the abbreviations you learned from this blog post by leaving us a comment below!