Aegyo: How to Be Cute in Korean

If you want to add some cuteness and adorability into the way you speak Korean, then aegyo may be the thing you need!

We’ve included a FREE PDF version of this lesson that you can take with you on the go. Level up your aegyo moves! Check out our free resource below: 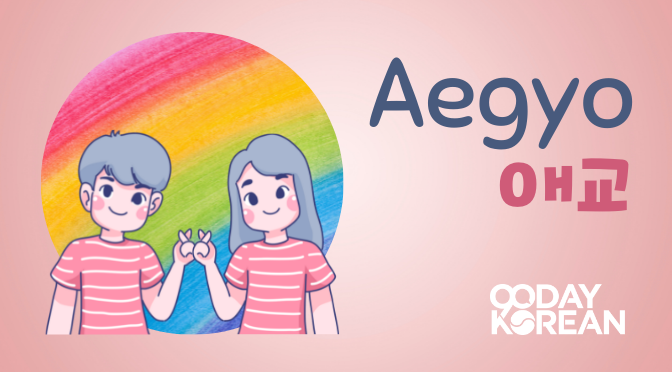 If you’re a fan of Korean Dramas and K-Pop, you may have heard fans calling on their idols to do aegyo. You may be asking, “what is the meaning of the Korean word aegyo?”

We’ll explain what it means and what you need to know to up your aegyo game!

Aegyo (애교) is when a person acts cute or in a childish way, despite not being a young child themselves.

Doing aegyo is a way of acting cute that is popular in Korean culture, especially among K-Pop idols.

The Korean word 애교 (aegyo ) literally means “behaving cutely.” This can be compared to the English term “cuteness.”

The word 애교 (aegyo) is pronounced similar to “egg-yo.” However, it should sound a bit more like “e-ggyo.”

Why do people use aegyo (애교)?

One reason for using aegyo to act cute is to flirt with a guy or girl you like. Many Koreans find it adorable to see your cute side.

You can also use it to get something that you want. Aegyo is a great way to show affection to your friends, family, or loved ones and is a fixture of modern culture in South Korea. However, aegyo is not for everyone–we’ll explain why a bit later!

If you are impressed by somebody’s aegyo moves, then you can say 귀여워요 (gwiyeowoyo), which means “cute” in Korean (dictionary form: 귀엽다 | gwiyeopda).

By the way, this article contains Korean words written in Hangul, the Korean alphabet. If you can’t read the Hangul, you can learn in just ninety minutes using stories and associations. 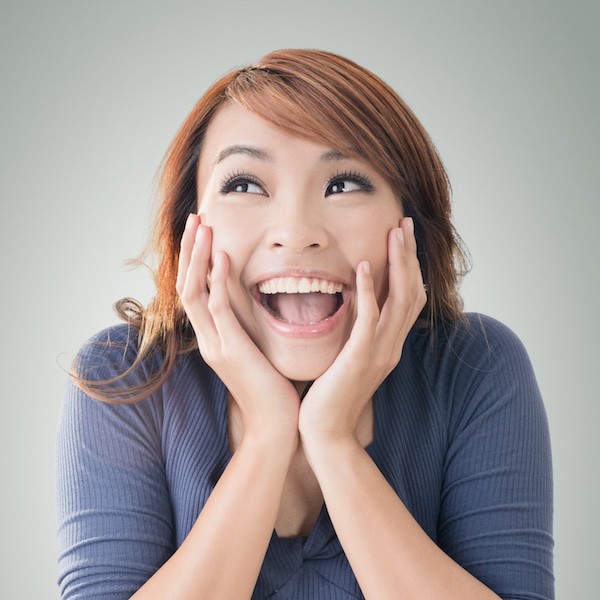 Korean aegyo is generally performed by young Korean women, although some men might use it too from time to time.  Some might find that when some men use aegyo, it makes them feel uncomfortable or weirded out. Having that kind of aegyo experience might even cause you to get 닭살 (dakssal | goosebumps)!

Of course, most people don’t use aegyo in an extreme way. In fact, quite a lot of Korean people hate it!

You can often find the more ridiculous examples of aegyo in Korean dramas or on comedy shows. Those examples are very different from how people might use them in real life since Korean dramas themselves aren’t a particularly accurate portrayal of Korea in such a way as they are oftentimes exaggerated.

These days you can see lots of Kpop idols and celebrities using aegyo not just among young women but with men too. In South Korea, you can see aegyo being used in many places.

How To Do Aegyo

You can do aegyo by doing different styles of cute displays such as pouting, using a baby voice, etc. This instantly makes someone adorable or lovable. The purpose of aegyo is to act adorable, especially to get your own way or something you want.

To do aegyo, you should use babyish actions, a cute voice or cute hand gestures, and facial expressions to achieve a desirable result.  These cute displays can immediately light up a room or make people happy. You can demonstrate aegyo cuteness through the way you speak, act, dress, decorate your room, and your overall demeanor.

Here are the specific things that you can do:

Stretching the final vowel of a word

You can use this type of aegyo cuteness if a word ends in a vowel. In this case, the vowel would be stretched to sound cuter (or whiny, depending on your perspective, this guy, in particular, hates it). The word 오빠 (oppa) is a good example of this kind of aegyo. It means “older brother” for those not familiar with 오빠 (Oppa). Girls use it to refer to a guy who is a little bit older than them.

Since lots of guys like being called “Oppa,” using this word in a cute aegyo manner has more effect than other words might. Unfortunately for guys, using aegyo to show cuteness in this way with the word 누나 (Nuna) will not have quite the same effect.

One option to spice up your text messages and emails with aegyo is to add the letters “m” or “ng.” Another option is to add extra consonants and wavy line symbols at the end of every word in a vowel.

Be warned; this can drive you mad if you use a dictionary to translate somebody’s 애교 (aegyo) text messages!

If you’re looking for a Korean dictionary to help translate some of this aegyo, check these out.

The 요 (yo) at the end of many Korean sentences are also often written as 용 (yong) when people are using this sort of aegyo. For example, 뭐해요 (mwohaeyo) may be changed to 뭐해용 (mwohaeyong).

Texting in this manner is not uncommon. Some people also take their aegyo a step further by adding these extra consonants (자음 | jaeum) when speaking as well.

This expression of aegyo uses their hands to make cute symbols like a heart or “V” sign (The Korean “V,” not the English “V”) in situations outside of having their photograph taken. Sometimes even ajjoshis (older Korean men) can be seen making the “V” sign on occasions. 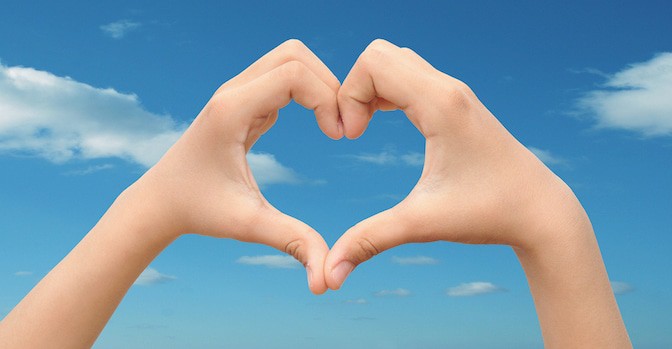 The hands can also be used to accentuate cuteness in the face by creating mock dimples or a “V” shaped chin. Watch the hand gestures in Gee if you want to learn some new aegyo hand gestures. Pouting is also included in this level of Korean aegyo.

Lotte World in Korea is an indoor amusement park near Jamsil Station that is open all year round. Many people have dates there, and it’s a great spot to see aegyo cuteness being used. At Lotte World, a trendy item on sale is animal ear hairbands. They look cute, and you will see lots of people wearing these around Lotte World. 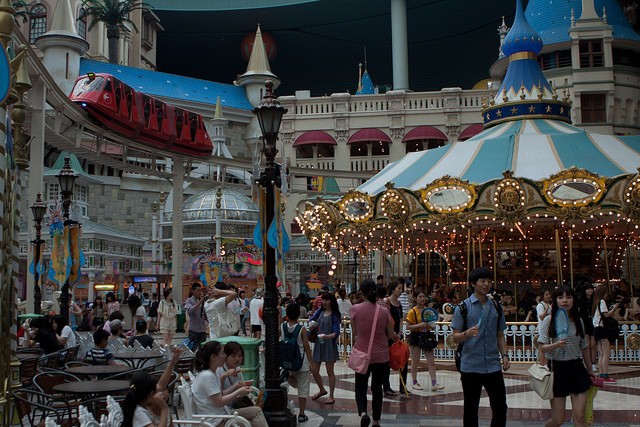 While wearing this inside, Lotte World is, of course, aegyo too. It is a generally accepted thing to do. After all, you are in a world with fairies and pirates, so why not wear 호피무늬 (hopimunui | leopard print) cat’s ears? Wearing these in public is not a common thing to do but is a sign of extra aegyo.

This next level of aegyo is similar to using hand gestures. The difference is that this level of aegyo uses the whole body (including foot stomps and noises to go with the gestures). By this stage, we are definitely entering TV drama aegyo territory, which is an excellent resource for learning Korean, by the way.

At this point, some readers may wish to address these aegyo ways of the people they are around. One way to do this is by using the verb 척하다 (cheokada).  You can use it to say:

Although this is a hand gesture, it is so closely associated with Korean aegyo. It is the more ridiculous type of aegyo that you see with K Pop idols and on Korean gag shows like this one, so it needs its own level.

Aegyo Sal (애교살) is an ever-growing trend in Korea wherein people would accentuate their puffy eyes as a way to be charming or cute. It comes from the word 애교 (aegyo) and 살 (sal), which means “fat.”

This trend, which originally started in Korea, is gaining popularity in other places in the world, like Japan and other parts of Asia.

While some folks would do their hardest to disguise under-eye puffiness, K-Beauty fans are embracing the eyebags with this new trend. In fact, some go as far as having fat injected into their under eyes!

According to this trend, small deposits of fats under your eyes (called “charming fat”) make your eyes pop and consequently would make you more youthful.

Everyone has probably heard of the Gwiyomi Song, at least once. It’s an extremely catchy song and is used to express cuteness. The lyrics don’t really mean a lot, but they do make for a very adorable song.

If you haven’t heard this irresistible tune yet, here’s a snippet:

Watch this video to see some cute hand gestures that you can do with this aegyo song.

Here is a summary list of common Korean aegyo phrases and words. We’ll show the comparison between the standard form and the aegyo form. Then, we’ll give you the English meaning.

If someone’s aegyo is getting on your nerves, then you might want to say:

If you liked this and want to improve your Korean language skills, then head over then go to our Korean Phrases resource page.

If you’d like to express yourself better in Korean, you’ll need a structured course to help you learn Korean efficiently. The 90 Day Korean Membership program helps you achieve your Korean language goals in a short amount of time. You’ll be having 3-minute conversations in Korean in the first 90 days! Check out the 90 Day Korean Membership program here.

Now that you know the different levels of aegyo, you can more easily recognize these expressions of cuteness when you see them. Of course, most people don’t use a lot of the high levels of aegyo seriously except for on TV or in dramas, but the first few levels are used quite regularly.

Which level of aegyo would you use with your partner, and which levels do you think are unacceptable in public? Let us know in the comments below!

31 replies to "Aegyo: How to Be Cute in Korean"