Today we’re going to connect you with Korean conjunctions! These useful Korean words will help you improve Korean grammar and express your ideas when talking, writing, or texting in Korean.

You’re likely to recognize these as you watch TV series or K-drama, Korean movies, everyday Korean life, or when you’re talking to native speakers of Korean. 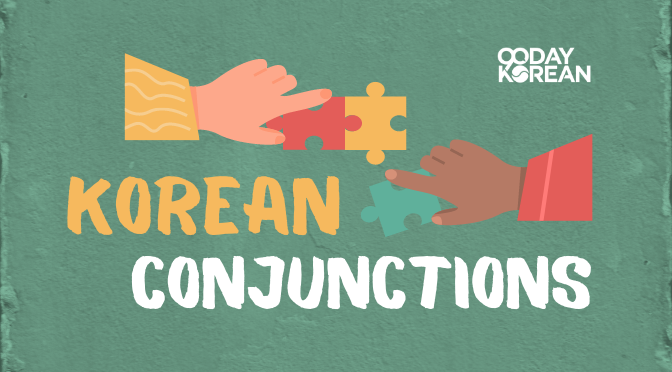 We’ll show you the common Korean conjunctions and sentence connectors that Korean people use on a daily basis. Let’s get to it!

Below is a free PDF guide that you can download and take with you:
Get “Korean Conjunctions” Free PDF Guide

Below are the common Korean conjunctions list or sentence conjunctions that you should learn first. These basic conjunctions are used to connect phrases, Korean words, and sentences. We’ve also included more examples to help understand the concept better.

The terms are explained using both Hangeul (Korean Alphabet) and romanized English. We recommend learning Hangeul as soon as possible since it’ll accelerate the speed at which you can learn Korean. It also makes it simpler to use Korean slang or create a Korean name for yourself.

Once you get the hang of Korean conjunctions, you can use them to create Korean sentences or try out some new Korean grammar. Lots of options; it’s choose-your-own-adventure Korean! 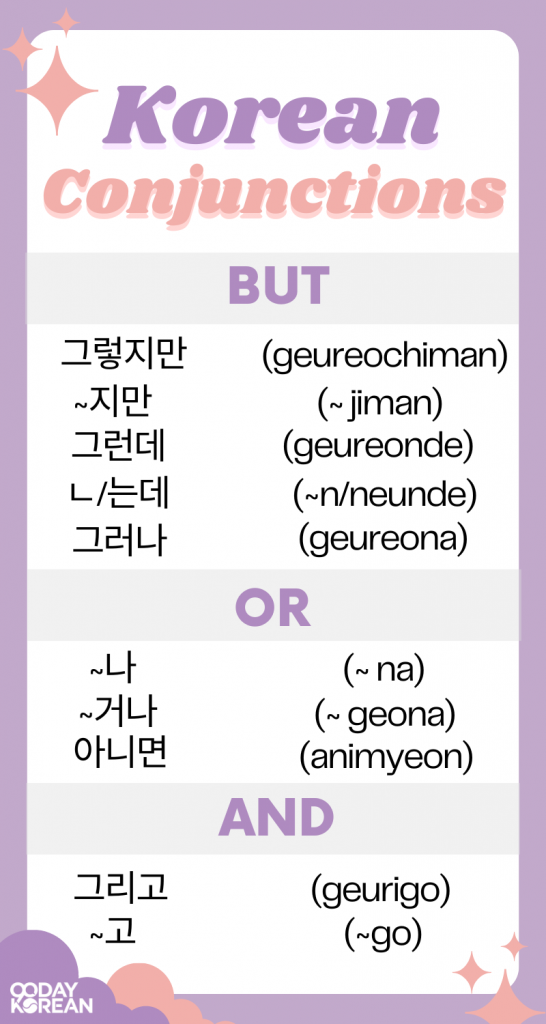 Similar to the English language, there are several ways to express “but” in Korean. This isn’t limited to one word. In Korean, these words can either be used as standalone words or attached to other words.

Read on as we’ve explained each of them below.

This is the first way to say “but” in Korean. This Korean conjunction comes from the verb 그렇다(geureota), which translates as simply as “yes.”

However, when you attach ~지만 (~ jiman) to its stem, you are forming a single word that literally means “That’s correct, but…”, which you can then follow with the contradiction to what you are responding to. Let’s see how it’s used in the first sentence example below.

I want to go see a movie with a friend today. However, I have an exam tomorrow, so I have to study.

In learning Korean conjunctions, this is one of the first ones to focus on in using “but” in Korean. It is used to unify two sentences into one sentence. Here’s the second sentence example:

Although I want to see a movie with a friend today, I have to study for an exam I have tomorrow.

그런데 (geureonde) = But, however, by the way

This is one of the most common Korean conjunctions. It can also be used to form a contradiction, just like 그렇지만 (geureochiman). However, it is better used to relate the two clauses to each other. It’s the form often used among friends.

This conjunction can be used to change topics. The shortened form is 근데 (geunde), with the same meaning.

I slept all day yesterday. But today I am tired.

Similar to ~지만 (~ jiman), this Korean conjunction can be used to directly connect the two sentences into one.

Though I slept all day yesterday, I’m tired today.

You can say “but” in Korean in this scenario with a similar meaning to 그렇지만 (geureochiman) and 그런데 (geureonde). However, in comparison to the two, it is more of a formal style. You’d most often see it used in literary or academic papers. Of all the Korean conjunctions on this list, this is the one you’ll most likely only see on paper. 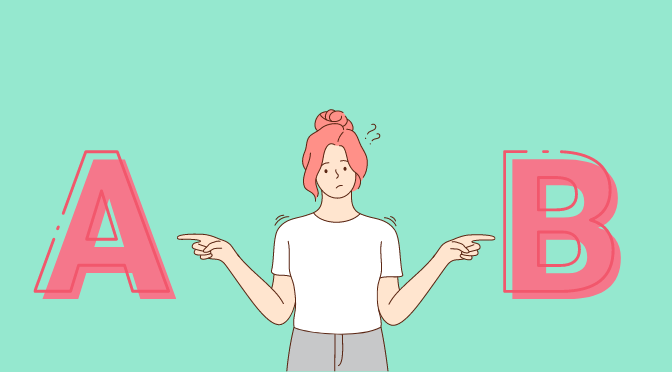 The conjunction “or” is used when choosing between options. There are three ways for you to say “or” in Korean.

In Korean, you can use the conjunctions ~나 (~ na),  ~거나 (~ geona), or 아니면 (animyeon) depending on the words that they are connecting.

This conjunction literally means “or,” so you can use this to connect two nouns between which to choose. This is one of the most useful Korean conjunctions. It’s a great one for upgrading your basic Korean sentences.

What shall we eat today? Meat or chicken?

This conjunction has the same meaning as the above, but it is used in connecting two verbs.

When the class ends, I will either watch a movie or go home.

This is used like the Korean conjunctions ~나 (~ na) and ~거나 (~ geona). For example, you can use it instead of ~나 (~ na) or together with ~거나 (~ geona). You can also use it between two sentences to make them sound more natural.

“And” in Korean is commonly expressed in two ways. The first is with 그리고 (geurigo) while the second is with ~고 (~go).

You’ve already learned a few different ways to say “and” in Korean from previous lessons. We’re going to show you another way. Use this Korean conjunction to connect nouns. You can also use it as the beginning of another sentence that follows your first one.

Please buy milk from the supermarket. And please buy eggs as well.

This is one of the basic Korean conjunctions. This version of “and” in Korean has a nearly identical meaning to 그리고 (geurigo) and is often used to connect actions together, typically in the form of “First X, and then Y”.

I’ll eat dinner and then take a shower. 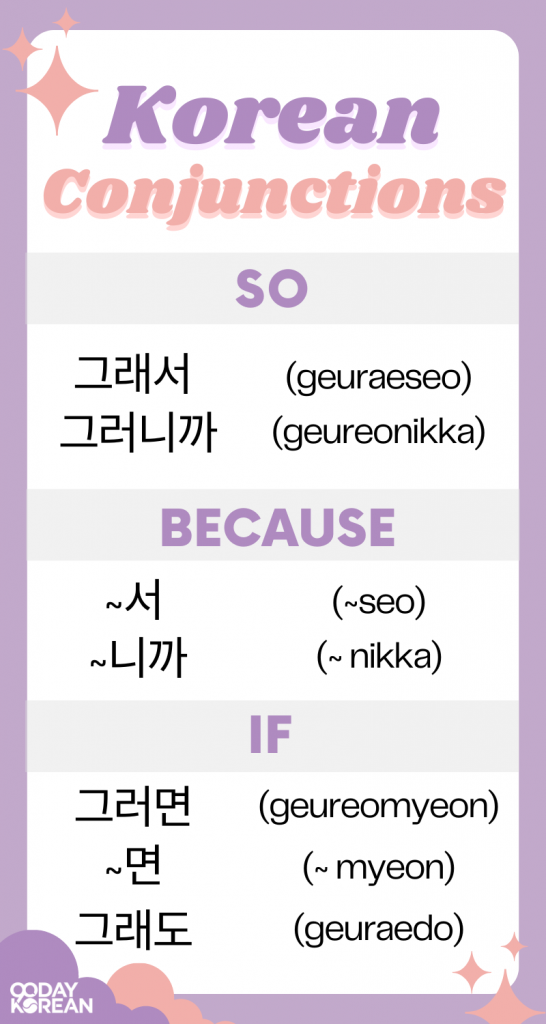 When expressing an effect of a previous statement, the word “so” is used. The words 그래서 (geuraeseo) and 그러니까 (geureonikka) can be used to express “so” in Korean.

그래서 (geuraeseo) = So, so that, thus, and so, therefore

The ~서 (~ seo) ending expresses cause and effect in the verbs it is attached to.

I didn’t receive any contact from my boyfriend all day today. Therefore, I am sad.

I will do a get-together with my family that day. Therefore, I cannot go to the birthday party.

Similar to the word “so,” “because” in Korean is also used to express cause and effect.

As a result of an action, this conjunction shows what happens next. It’s one of the most common Korean conjunctions.

My stomach hurts because I ate a lot of candy today.

This is used in a similar fashion as ~서. You will see the Korean conjunctions ~니까 (~ nikka) and ~서 (~ seo) quite often. Like, 그러니까 (geureonikka), it focuses more on expressing the reason why something could not happen. It can be used in the past tense.

I couldn’t look at my phone because I slept all day. 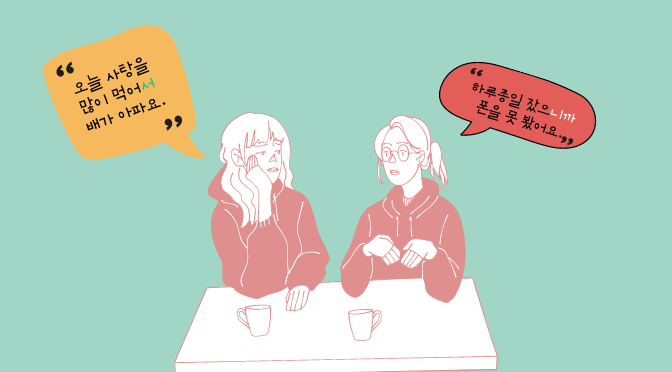 This conjunction is generally used to express what must occur before something else will take place.

Here are different ways how to use “if” in Korean.

You can use this conjunction to start sentences that expand on the information previously revealed to you in the conversation.

This Sunday is a resting day? In that case, let’s have a meal together then.

Attaching this Korean conjunction to a verb, you can make a sentence saying you’ll do something if you first do X or once you first do X.

그래도 (geuraedo) = Nonetheless, even if, even so, but still, nevertheless

My head hurt a lot yesterday. Even so, I went to play with a friend. 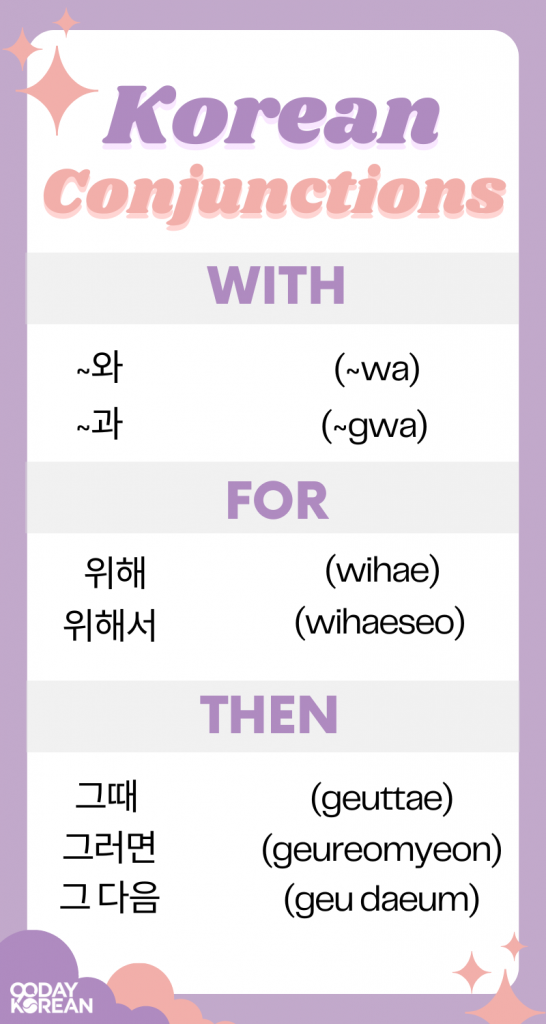 There are two ways to use “with” in Korean, which depend if the previous word ends with a vowel or a consonant.

If the word ends with a vowel 와 (wa) is added.

Yesterday I ate lunch with a friend.

If the word ends in a consonant, the conjunction 과 (gwa) is added instead.

My grandmother lives with my uncle.

There are two ways to use “for” in Korean.

Using “for” in Korean with a noun:

I buy a gift for mom.

Using “for” in Korean with a verb:

I exercise for losing weight.

“Then” in Korean can be expressed in three different ways.

I didn’t know her well then.

Then let’s try this again.

I will order food and then drink tea.

Simple Response in a Conversation

In addition to the Korean conjunctions you’ve learned above, here’s a simple response you can use for basic conversations.

It’s not really a Korean conjunction, but it’s usually used in Korean conversations that you might encounter, so we thought we’d add it in. It’s a very basic and useful Korean sentence. We’ve also added the English translations and example sentences for each conjunction.

This is a basic response in a conversation, at each level of politeness. We recommend using 그래요 (geuraeyo) since it’s considered polite but still good for everyday conversations.

그렇습니다 (geureoseumnida) is the formal version you might use at the office when giving a speech, or during formal situations.

You would use 그래 (geurae) with someone younger than you or someone with who you’re on close terms. 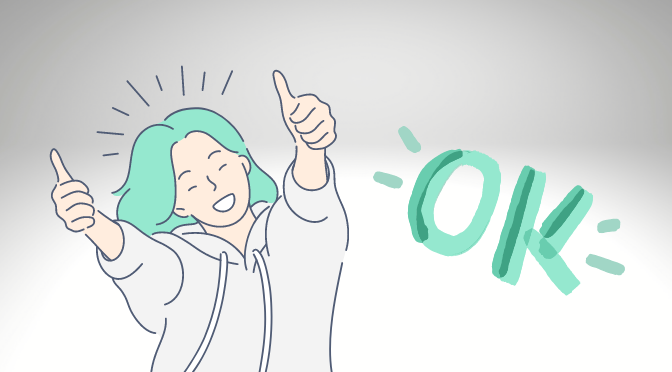 We hope you enjoyed learning Korean conjunctions and basic sentence connectors! Start with the simple conjunctions, and keep adding to them as you connect them with Korean words. They’re an important part of Korean grammar and are useful to advance your Korean language studies.

Once you learn Korean conjunctions, you’ll be surprised by how often you’ll hear them. They’re bound to come up in your favorite Korean movies, K-Dramas, and K-pop songs. This way, you’ll automatically be enjoying and learning at the same time.

You can use them along with common Korean phrases or Korean vocabulary words to really start to express yourself. They’re also great for chatting with Korean friends or if you’re speaking with native speakers in Korea.

Why not give them a try yourself? Before you go on to the next lesson, write some example sentences using Korean conjunctions in the comments below!