Are you looking for a Korean dictionary or Korean Translator to look up that Korean phrase that you hear all the time?

Maybe you need to get a good Korean-to-English translation for a few lines from your favorite K-Pop song, a phrase from a K-drama, or a line from a movie that you’ve watched?

Perhaps you need a quick English-to-Korean translation to say something important to a Korean friend? 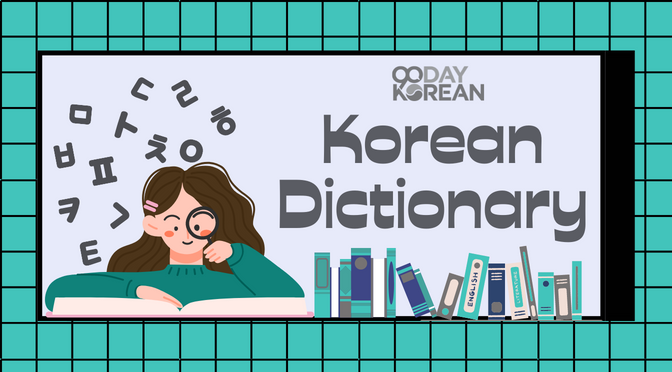 Whatever it is for, we’ve got you covered! Below is a free PDF guide that you can download and take with you:

Get “Korean Dictionary and Translator” Free PDF Guide
A solid Korean-English dictionary or English-Korean Dictionary will be handy if you’re looking to learn the Korean language fast or if you wish to understand more about Korean culture.

Here are the top picks and tips for Korean dictionaries and translators.

Below, we’ll talk about Korean dictionaries that can help with learning the language. Generally, you don’t need an account to use these Korean dictionaries, but if you create one, you can save some of the words you’re trying to remember.

Most Korean dictionaries these days are online and have an app option as well. These are more useful and comprehensive than the paperback versions.

Furthermore, most apps and web pages for English-to-Korean dictionaries still work best with Korean and English translations. However, they are gradually getting better at translating Korean into other languages.

Some apps already have excellent Korean dictionaries for languages other than English.

The Naver Korean dictionary is a great go-to application and website for when you’re searching for accurate Korean and English translations. You can visit their site here: Naver Dictionary (네이버 사전 | neibeo sajeon)

In addition to English, you can find the dictionary website to hold many other language options, from Japanese to Finnish. This dictionary offers you example sentences, the specific word translation (in its noun, adjective, etc. forms), and any possible other meanings it may have. 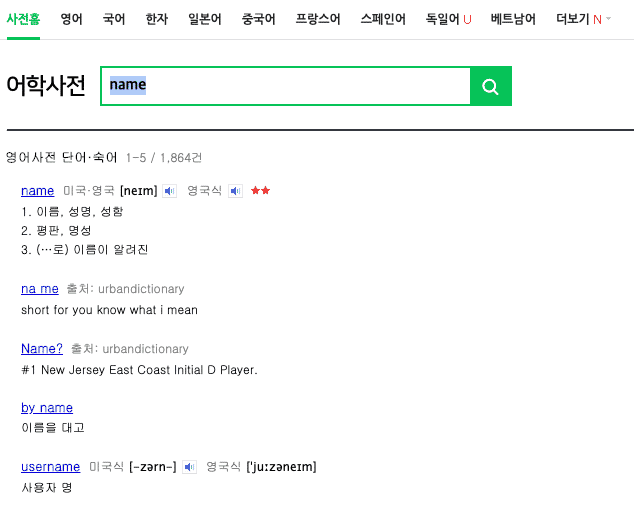 A nice feature of this dictionary is that you can click on the blue speaker icons to practice audio to help you learn Korean pronunciation. Keep in mind that not all of the words will have audio, but many do. There could be audio for both the Korean and the English words.

This dictionary does have some limitations and isn’t stylistically the most modern option. However, it is incredibly accurate and nicely detailed. This dictionary works best when searching for a specific word instead of a complete sentence.

You can also put in a whole sentence, but be aware that the dictionary will more likely only offer you each word’s meaning separately if the sentence is complex. Naver dictionary is excellent for looking up parts of Korean sentences, such as conjunctions, particles, and markers.

This is the go-to dictionary for Koreans since there are a lot of language options. It’s a very popular dictionary for Koreans learning English because of its accuracy. Both the site and the app are great choices if you’re studying the Korean language. You can get the app version of this for both iOS and Android. 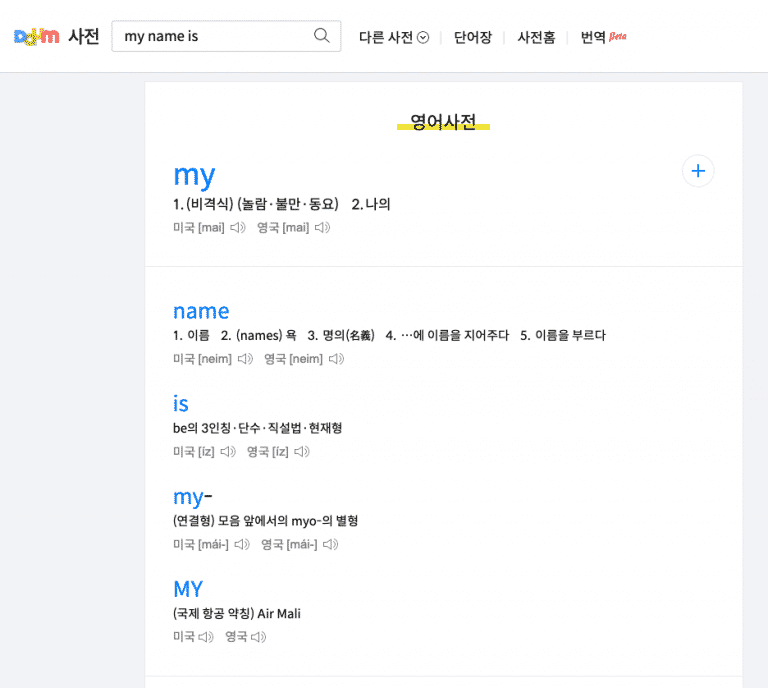 When you search for a term, it offers you all its known meanings. And if you search by entering a sentence, it breaks down the sentence into separate terms.

Besides operating as an English to Korean dictionary, and vice versa, it is possible to search the dictionary for other languages. However, in comparison to Naver, Daum does not have as many languages available.

One of the positives is that the layout for Daum is a bit clearer than Naver’s, which makes it easier to understand what comes up in your search.

Daum Dictionary has an app on both Google Play and the App Store.

Benefits of a Korean Dictionary

Studying the Korean language through vocabulary and grammar lessons is an effective way to learn the language. To help with that, you’ll want to get an English Korean dictionary or Korean English dictionary so you can check out English words in Korean quickly wherever you are.

You might also hear a sentence from someone speaking the Korean language, and you want to know what that sentence means. Some apps give pretty accurate Korean translations from audio.

Although generally, these Korean translation apps are accurate, you might want to practice caution while using these tools to communicate with Koreans, as your message may be misinterpreted. A Korean translator app might give vocabulary options that are too “literal” or even inappropriate.

The translation tools can be helpful in checking what you have already written.

Papago is one of the best Korean translator apps out there, which is provided by Naver.  Papago (파파고 | papago) is a Korean Translator that specializes in offering an accurate Korean translation of Korean sentences into English and other languages. This means that it is not exactly a Korean English dictionary. However, you can use it to check the meaning of a complete sentence or translate how something you’d wish to say can be said in Korean.

Papago will also offer additional words and idioms that you may be good to remember for the future. There is an audio button for both the input and the translation result.

In addition to the website, there is a translation app for Android and iPhone.

This is another option if you prefer to use Google Translate for a good Korean translation and English translation. It’s convenient as it shows the translated text in a fraction of a second.

There is also an app version that has a great camera feature. This convenient Korean Translator tool allows you to point your camera at a sign in Korean, and it will instantly translate it into English.

The Google Translate app also works with audio translations. This means you can use Google Translate English to Korean words without the need to type. You can say something in English, and the app will give you the Korean translation with the correct pronunciation almost instantly.

Your settings may even be changed for the speaker to have a male or female voice. The same can be done the other way around as well. It’s one of the most convenient Korean translate apps available so far.

This Korean Translation App is different because it’s of foreign making. It’s a free app that users can download for both Android and Apple phones.

There are hundreds of thousands of vocabulary words, phrases, and sentences that you can use to learn more about the Korean language. It even includes some Korean idioms, which can be helpful for your future conversations with native Koreans.

In addition, it offers the ability to review words you’ve learned directly in the app!

Recommendations for Korean Translators and Dictionaries

Here are some of our recommendations for Korean Translators and Korean Dictionaries. If you know of other apps or sites, let us know in the comments below.

Check out the Naver dictionary when trying to learn the Korean language. It’s the most comprehensive and has an excellent app for your smartphone. You can try out other dictionaries like Daum English Dictionary as well. Personal preference may be a factor, so try out a few and see which ones you like best.

Our favorite Korean to English dictionary, among other dictionaries, is the Naver dictionary. The app works nicely as Korean translator apps, and the practice sentences are helpful for understanding context and usage.

These aren’t exactly dictionaries, but they’re helpful in writing out Korean words and sentences in romanized English. For example, let’s say you wanted to write the Korean word 선풍이 (seonpungi | fan) in English letters. Each of the Korean letters has a corresponding set of English letters.

This is ok for spelling out words in English for people who can’t read Korean. However, it can be very confusing to learn Korean or know how to say the words correctly.

Since it can make pronunciation quite confusing, we don’t recommend using romanized words often. It’s much easier to spend the hour it takes to learn Hangul (Korean Alphabet). Here’s a resource for that: https://www.90daykorean.com/how-to-learn-the-korean-alphabet/

Once you know how to read the Korean language alphabet, you may also want to practice or check the pronunciation of your Korean vocabulary using a pronunciation tool.

The Korean Romanization Converter is an excellent tool for romanizing Korean words using the Roman alphabet or letters. It gives you three different selections and shows a few different types of results. It’s nice because there are lots of romanization options depending on how you desire to use it. The downside is that you need to keep pressing the “back” button each time you want to get the English spelling of a new Korean word.

The Hangul Romanizer can easily romanize Korean words using the Revised Romanization of the Korean system. It’s helpful because you don’t have to type “enter.” Instead, type or paste the Korean word, and it automatically shows the romanization.

The downsides are that you may need to wait for the page to load, and the site is sometimes down. Occasionally the romanization is incorrect, so you may want to double-check the results.

How to Translate English to Korean words

One of the easiest ways to translate English terms into their Korean equivalent is to use Naver Dictionary. Just head over to the dictionary and type your word in. Then press the green magnifying glass.

Keep in mind that there can be several Korean words that match that English word. In that case, look at the sample sentences for context to see which Korean word is the best match. Alternatively, if you know a synonym in English for that word, you may also want to try that.

Hopefully, one or more of these websites and applications will be of great help in supporting your journey of learning Korean! Whether you are searching for vocabulary and words, or translations of complete sentences, these tools can be very useful.

Be sure to check out our YouTube channel for great videos for learning Korean. If you’re looking for a game plan, you can use for studying Korean, go here: https://www.90daykorean.com/learn-korean/.

We also have a structured online program that will teach you to have a 3-minute conversation in the first 90 days. You can learn vocabulary words, phrases, and sentences and put them to use in a conversation immediately.

Do you have a favorite dictionary or translator? Let us know below in the comments!

30 replies to "Korean Dictionary and Translator – Online Apps in English"