Korean flag – Meaning and symbols of this national banner

In this article, we will be learning more about the Korean flag, which at one point was a symbolic piece that represents the whole country of Korea. 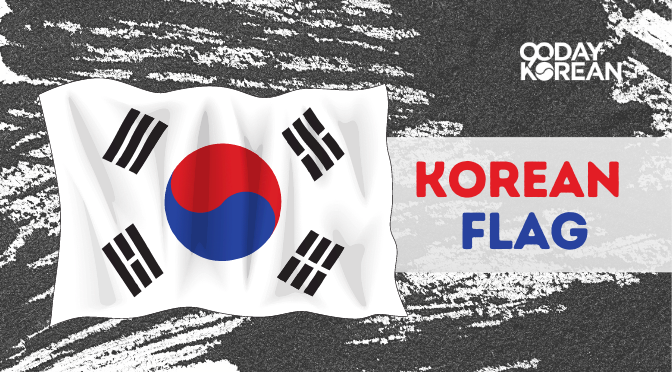 The flag of Korea in its earliest version was designed and put to use in 1882, becoming the national flag of South Korea in 1948 after the Korean War ended. The current South Korean flag was taken into use in 2011.

Korea’s flag is composed of four colors: white, red, blue, and black. Each color has its purpose in the flag. It has a plain white background forming a rectangular shape. In the middle, a yin-yang circle is formed, minus the spots, with the color red on the upper half and blue on the lower half. The circle is then surrounded by four trigrams with the color black, placed in each of the four corners.

The South Korean flag bears four colors with symbolic meaning. Below are the specific symbols associated with each of the colors and elements in the Korean flag.

The color white is seen as a traditional color in Korean culture, commonly used in daily clothing in the 19th century. The white background itself represents purity and peace. Even today, white often appears in Korean hanboks.

The red and blue colors alone are named 태극 (taegeuk), which are essentially what the whole flag was named after, with the meaning “supreme ultimate” in English. The red and blue taegeuk is divided into two parts, decidedly in the shape of yin-yang, which was derived from old Chinese philosophical ideologies.

But put together like this, the shape is a symbol of the opposing elements complementing each other. The thicker part of yin and yang represents the beginning, and the slimmer part expresses the ending. So where yang ends, yin (or eum in Korea) starts, and then where yin ends, yang starts, and so on.

The three solid bars are 건 (geon), meaning “sky” and the three bars set apart in the middle are 곤 (gon), meaning “earth.” The bars on the upper right corner is 리 (ri) which represents “fire,” and the bars on the lower-left corner are 감 (gam) which symbolizes “water.”

These four black trigrams represent the movement and harmony of the forces in the Korean flag. 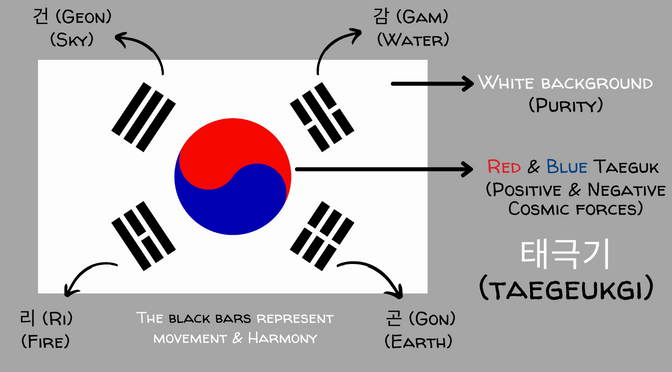 History of the South Korea flag

In the history of Korea, the country did not have any national flag until 1882, while still under the Joseon dynasty. However, the need for a flag arose in the late 1800s during the Japan-Korea Treaty in 1876 when the Japanese flag was presented, while Korea at that time didn’t have a flag. With this, the king of Joseon ordered the government officials named Sin Heon and Kim Hong-Jip.

The task was further delegated to Lee Eung-Jun as well as a Chinese official Ma Jianzhong. A newspaper from Japan in 1882 credited the original flag, which by then had been used as Korea’s national flag on at least one occasion, as the design of the king of Joseon, Kojong.

Changes made to the Korean flag

The flag didn’t immediately appear like how the current flag looks like. Between 1882 and 1910, Korea’s flag came under some slight changes. The basic design has changed mostly the same, or nearly identical, since its inception. However, some changes to the colors and ratio have occurred throughout time.

In the initial version, the bars were black, but in some other versions, they have been varied shades of blue, usually a dark navy shade, but also bright blue for a brief period of time. Originally the blue in the yin-yang circle was also a darker shade, although interestingly enough, the red has remained mostly the same, though sometimes a little more muted in the shade.

The white background remained, but the most notable change is that the lines of red and blue within the circle are much more simplified in the current South Korean flag than they were before 1910. The circle also changed from having blue on the left and red on the right side to red on top and blue on the bottom in 1948. 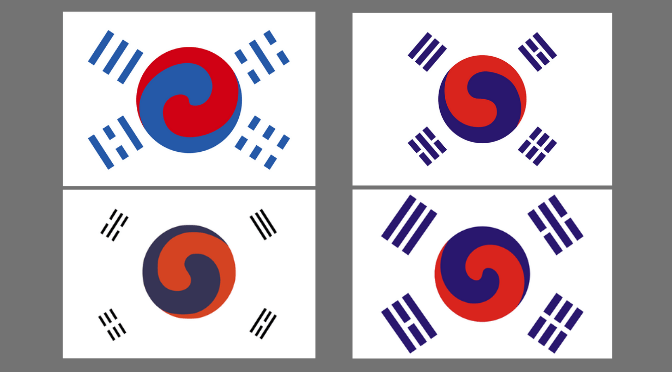 Who created the national Korean flag?

Although the flag was originally credited to Kojong, he was mostly simply the commissioner of the flag. The original design for the taegeukgi flag came from Lee Eung-Jun, with Hong-Jip and Ma Jianzhong making modifications primarily to the coloring of the flag.

Finally, a politician named Park Yeong-Hyo presented a scale model of the flag as it was to the government in August 1882, and this version of the flag ended up becoming recognized as Korea’s official flag. Thus, Park Yeong-Hyo has since become the person credited as having created the first national flag of Korea and was the first person to use Korea’s flag in Japan in 1882.

Taegeukgi as the South Korea Flag

The taegukgi remained to be seen as the South Korean flag, and they continued using this flag as its emblem when Korean independence was restored in 1945. It officially became the national flag of South Korea in August of 1948, when the state of South Korea was established. The color scheme of South Korea’s flag was fixed to precision in 1997.

This came from pressure from Soviet Union’s military officers, who thought the taegeukgi flag wasn’t modern enough in design and ideology. The flag was designed in Moscow, although it is unclear by whom. Today it is credited as the design of Kim Il-sung, the founder and first dictator of North Korea. 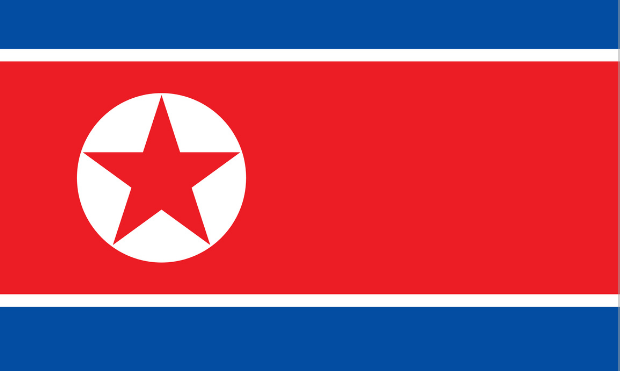 The national flag of the north is a lot different from the flag of South Korea. The North Korean flag is blue, white, and red. It consists of a red panel-like mid-section, with a red star against a white circle towards the left side. Above and below are thick blue stripes, and in between the red and blue on both sides are narrow white stripes.

What is the Korean unification flag?

The North and South Korea flag was adopted into use in 1991. The entire Korean peninsula is represented through this flag, in solid blue color, against a white field background.

The Korean unification flag was created for the 1990 Asian Games, where North and South Korea originally planned to compete as one team. They did not do so in the end, and thus the flag was not used for the game in the end. 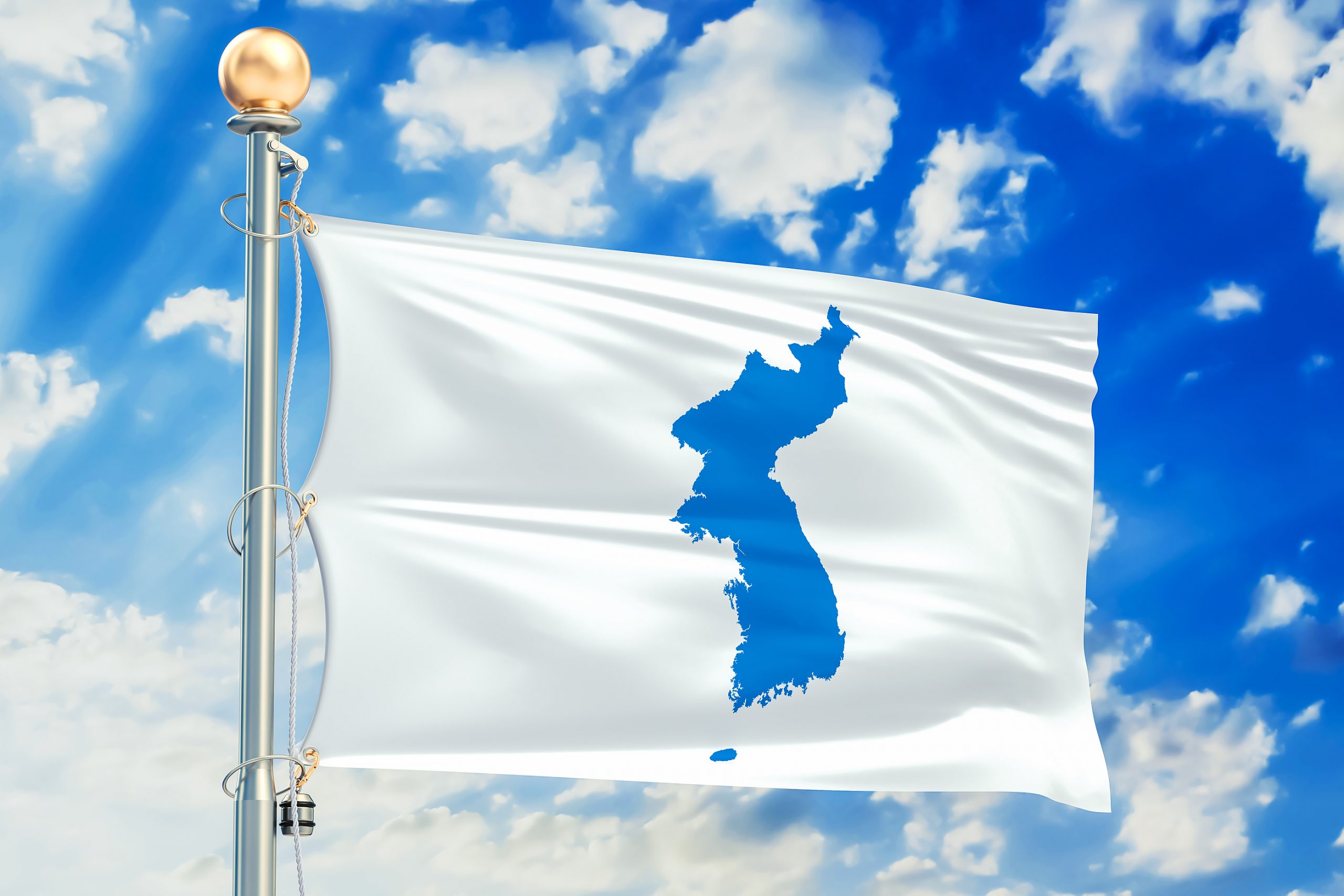 However, in the 1991 World Table Tennis Championships, the two Koreas competed as one team, using the Korean unification flag as their flag in the competition.

A variation of the flag has been used in a few other international events since. This was used as a designation of the two countries competing as a unified team. One notable such instance is the 2018 Winter Olympics in Pyeongchang.

And now you know the story and history of the South Korean flag that currently represents South Korea! How similar or different is it from how other countries got their national flags? Let us know in the comments below!

Next up, if you wish, perhaps you’d like to read about the history and modern life of South Korea!