Korean Karaoke – Everything to know about noraebang

It’s no secret that Korean karaoke is a massively popular pastime in South Korea. It is loved by the Koreans, no matter what their age.

High school kids love to go to karaoke in their free time, it’s a popular hang-out spot for groups of friends both during the day and night, and it’s almost a mandatory stop during a night out with co-workers. In other words, karaoke is a deeply ingrained part of Korean culture. 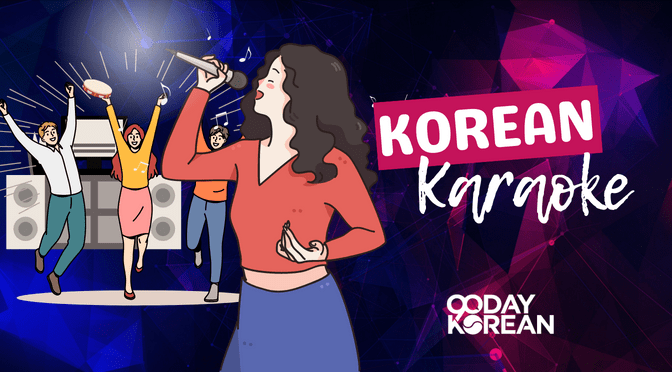 In this article, we will go over what Korean-style karaoke is like, where its name came from, and what you can expect from singing karaoke with Koreans. It’s a pretty big slice of Korean culture and one of its most enjoyable ones at that. You’ll want to know all about it to not miss out on the experience, even if your trip to South Korea will be a short one.

What is Korean Karaoke?

Karaoke is a really fun activity that can be done with friends and family. It can also prove to be quite stress-freeing, as well as help you forget about your worries for the moment. It’ll also let you sing and dance and pretend to be a superstar for a moment but without the stress of having to perform for big crowds.

If you’ve watched K-dramas or movies, you might already have some kind of an idea of what karaoke in Korea looks and sounds like. If not, then prepare to be excited for your first chance to try out Korean karaoke.

What is “Karaoke” in Korean?

In Korean, “karaoke” is referred to as 노래방 (noraebang). The word 노래 (norae) stands for “song” while the word 방 (bang) means “room.” In other words, the Korean word for karaoke literally means “a song room.”

Alternatively, the sign directing you to a noraebang may also read as 노래연습장 (noraeyeonseupjang), which means “a place to practice singing.” To add to this, knowing how to read in Korean will give you a better karaoke experience. After all, the lyrics will be in Korean. If you’d like to learn Korean, start with the Korean alphabet.

And as the name entails, in South Korea, it is not customary to head into a karaoke bar with a stage to sing in front of strangers. Instead, you book a private room for you and your group to take turns singing. This is a great option for those who may be too shy to sing otherwise, as well as for those who want to belt out several songs in one session.

What are Korean karaoke bars like and where can you find one?

For starters, it won’t be difficult for you to search for a place anywhere in Korea for karaoke. Some of the most rural areas may be a small exception, but in cities like Seoul, you’ll find multiple Korean karaoke bars with 노래방 (noraebang) signs in just about any district.

Especially if you find yourself in an area near a university or otherwise a popular hub like Gangnam, you’ll be finding noraebangs all around you. Hongdae is also one of the best districts for the coolest noraebangs.

How does a noraebang work?

You typically pay for them by the hour, starting by paying for one hour. If you wish to extend, you can pay for the additional time. If there is no queue to the karaoke rooms, most establishments keep giving free extra time to sing, sometimes even for hours.

Although many people in South Korea are passionate about going to karaoke to spend away an afternoon, this business truly gets busy in the evening time. That is when Korean colleagues and groups of friends go out for food and drinks, with karaoke following up as the second or third place visited that evening.

The day can easily be spent belting away to one’s favorite songs. In some karaoke, it’s also possible to order drinks and food, although oftentimes, only sodas like Sprite are served. And because many karaokes might stay open until dawn, it can be a fun location to be at if one misses the last subway home that night.

In the past couple of years, “coin noraebang” aka 코인노래방 (koinnoraebang) has also become quite a popular thing. These are tiny karaoke rooms that can barely fit two people, and you’ll pay directly into the karaoke machine based on the number of songs you want to sing.

There will be no extra time offered, sadly, but there are also no time limits, either, as long as you have coins you can input into the karaoke machine. And yes, along with coin karaoke machines, there are cash machines on site where you can exchange money for coins.

The basics for a karaoke room are as follows: a karaoke machine, a TV, two microphones, a remote control, a songbook, and a tambourine.

The size of the singing room depends on the establishment, but also the size of your group. There’s always also some comfortable seating, and larger rooms are equipped with a table as well.

In the more basic noraebangs, the singing rooms will look quite bleak. However, the more expensive noraebangs have often put a lot of effort into the room’s design and decoration, like disco lights. For example, it may have a French theme.

Also, the better noraebangs sell alcohol like beer, snacks, and sometimes even ice cream. Some of the luxurious noraebangs may offer table service, which can make a night of singing all the more unique.

Songbooks typically come with a huge song selection. Apart from Korean, there are also English, Japanese, and Chinese songs. Each song has a number next to it and is arranged alphabetically. Using the remote control, enter this into the screen. To avoid having to pause between songs to look for the next one, you can add an entire list ahead.

How much does a noraebang cost?

While we already detailed how the pricing system works, we didn’t offer any specific prices yet. If you go in the morning, you can typically get at least 60 minutes in a basic noraebang for 5,000won to 15,000won. The exact price depends on the number of people as well as the noraebang itself. If you’d like to learn more about how much this costs, you can first read our article on Korean money.

For a more upscale noraebang, which offers more luxurious-looking rooms and other services, the hourly price is usually around 20,000won to 30,000won. When you go at an earlier time of the day, it is also far easier to get free time added to your singing session.

This time is called 서비스 (seobiseu) or service, and depending on the time of day, you may get 10min to 30min of it, but sometimes it may feel like the service time added never ends at all. During peak time hours, however, you can expect the price to double, and the chances for any free time added are scarce.

Some solo singing rooms range between 2,000won to 6,000won hourly. As for a coin noraebang, one song typically costs 500won. However, the price per song lessens the more you purchase at once. For instance, for 1,000won you might get to sing three songs, or you can purchase an hour to sing as many songs as you want for 5,000 won.

What songs are popular to sing at Korean karaoke?

Although there are hundreds upon hundreds of songs available at a noraebang, some songs are, of course, more popular than others. Whenever there is a popular new song released, it will get sung a lot.

In addition, there are also some songs that will remain popular year after year. Typically these songs are in Korean, and below is a quick list of a few popular ones to sing in a karaoke room:

While people love to have a good time in karaoke and sing popular upbeat K-pop songs like TWICE’s Likey, they also love to let their inner ballad singer out. Regardless of the genre, you can easily sing either type of song in noraebang, and everyone will love it!

If you’re a person who likes music and entertainment and wants to sing, but the crowds at a bar are not your thing, it looks like karaoke is perfect for you! And even if your voice sounds like a screeching hyena, you’ll absolutely have a blast singing some songs with your friends after having dinner at a restaurant when in Korea.

We hope you learned a lot more about the noraebang culture today. If you’ve tried this before, tell us about your first time in a noraebang in the comments!

2 replies to "Korean Karaoke – Everything to know about noraebang"