If you know these common Korean mistakes ahead of time, then you’re going to be a few steps ahead of the game. Your Korean learning will be much smoother. Plus you’ll look much cooler when you talk like a fluent Korean speaker in a short amount of time.

Below, we will cover the most common Korean language mistakes that people make. We’ll also fill you in on how to avoid these common mistakes. 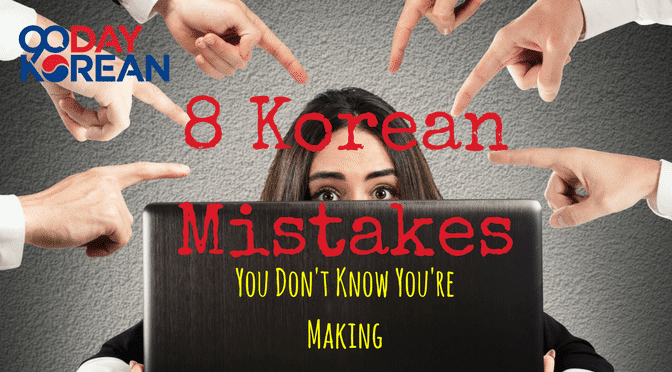 Raise your hand if you’ve ever had this situation happen to you.

You hit the Korean study books hard, head out to practice your newfound knowledge, and the people you talk to have no idea what you’re saying.

It’s a common situation for people who learn Korean as a second language. Often times, Korean is the first language they’ve chosen to learn. The sounds, pronunciation, and intonation are far from their mother tongue, so it’s hard to replicate those sounds that are required for Korean.

But rest assured, you’re not alone!

Think back to the opposite situation. Have you ever talked to people that were learning English as a second language? They may have tried to ask you something in English, but you had no idea what they said. If they persisted with the question, you probably found out that their pronunciation was slightly off.

It’s a very similar situation to you speaking Korean.

When you run into this situation, the key is to keep at it. If the other person doesn’t understand what you are saying in Korean, try explaining it another way. You’ll find that your pronunciation or intonation was slightly off, and now you can find out the correct way to say it.

In short, keep going and don’t give up!

Luckily, there are ways to avoid this situation altogether. We’ll fill you in below!

One of the first phrases everyone learns when learning Korean is “안녕하세요” (annyeonghaseyo), which is a greeting similar to “hello”. Have you ever listening to Koreans pronounce this word? The ending is not pronounced the way it is written. Instead of finishing with a “요” (yo) sound, Koreans finish the greeting with a “여” (yeo).

Surprisingly, this becomes easier to recognize once you learn how to read the Hangeul. Being able to read the Korean alphabet helps you with proper Korean pronunciation and recognition so if you don’t know it then definitely learn.

Many people learn the formal way to speak Korean early on, which is the “-ㅂ니다 (- ㅂ nida)” verb form. When you use this form, the “ㅂ” needs to get paired with the verb depending on the verb’s structure. The “ㅂ” is always in the bottom, or “받침” (batchim), position. Normally, the “ㅂ” has a “b” or “p” sound, depending on where it is in the word.

This is a special case! Instead of pronouncing “합니다” like “hap-ni-da”, you’re going to say it like “hamnida”. In Hangul, the pronunciation will look like “함니다” (hamnida).

Although it seems strange at first, it will make your life easier. If you try saying “hap-ni-da” vs. “hamnida”, you’ll notice the second one is easier to say. It flows easier. Korean has developed rules similar to these, so look out for pronunciation that doesn’t seem to follow the rules.

If you want an easy trick to remember this one, try an association. “합니다” (hamnida) kind of sounds like “ham need a”, meaning that you need a ham. Around Chuseok (Korean Thanksgiving), a very common gift is to give Spam (the meat, not the email!). So you can think to yourself, “around Chuseok, many people need a ham”. “Hamnida!”

Those irregular pronunciation words! Why do they have to make life so difficult?

The next violator we’re going to look at is “같이” (gachi), which means “together”. If you pronounce this word according to the rules of Hangul, it should sound like “ka-tee”. However, the correct pronunciation is “ka-chee”, or “가치 (gachi)”.

The numbers for the Korean language are a bit burdensome because you have to learn two systems. Not only that, but you need to use different systems for different situations.

If you have managed to avoid pulling your hair out at this point, we applaud your patience and persistence! Rest assured, we’ll give you some help to make sure you’re using the correct ones.

One of the common Korean mistakes is using the China system to talk about age using “살” (sal) for years. A big no-no! If you’re talking about your 5 year old nephew, his age is “다섯 살” (daseot sal), not “오살” (osal).

If your cousin is 14 years old, how would you express that in Korean?

When you’re using age in Korean, you want to stick to the Korea System. An easy way to remember this is if you remember the story about Hana, the Korean fencing champion. She LOVES the Korean number system, and she frequently defends it’s honor. She is also sensitive about her age. Anytime someone talks about age incorrectly, she challenges them to a “set” of fencing “duels”.

Or put another way, when age comes up, “Hana” demands a “duel”. And she wants at least a full “set” of duels!

We hope this helps you steer clear of any upcoming duels!

Koreans value honor and social rank. It’s deeply ingrained in the Korean language in a number of ways.

One way is the special vocabulary that is used for those higher in the social ranks than us. One clear example of this is when you’re talking about your parents or grandparents.

Suppose their birthday is coming up. If you tell your Korean friend that it’s their “생일” (saengil | birthday), then you gave your ancestors a verbal slap in the face. How rude!

The correct word for your parent’s birthday is “생신” (saengsin).

Although you are forgiven as a Korean learner, it’s much better to use the proper word. Not only will you be more respectful to your parents in the eyes of Koreans, but you’ll also sound more like a fluent speaker!

If you need an association, think of your shin. If you told your dad that it was his “생일” (saengil), he would kick you in the shin and say “생신” (saengsin)!

One challenging part of learning Korean is knowing when to use the correct word. For example, maybe you want to learn the word for “wine” in Korean. One source says “포도주” (podoju), the other says “와인” (wain). Which one is correct?

The best word to use is “와인” (wain). Since there is a big push to learn English here, some of the older Korean vocabulary is replaced with the English word sounded out in Korean.

If there are two choices for a word in Korean and one of them sounds like English, that’s generally the best one to use. It’s more recent and likely more commonly used. It’s not a hard and fast rule, but a good guideline to use to keep your Korean flowing smoothly.

One of the Korean mistakes that stand out is with the word “not”.

This works fine in most verb and adjective cases. There is one exception, which is with “하다” action verbs.

Examples of this would be:

You cannot add the “안” (an) at the beginning of the verb like in most other cases. These verbs are very particular about how they get along with “안” (an). This is wrong:

Instead, you need to sandwich the “안” (an) between the beginning part of the verb (noun portion), and the “하다” (hada). It will look like this:

Using this rule is a simple way to make your Korean more natural sounding.

To help remember, think about how society rewards action takers. They make the effort, so they get to reap the benefits.

Well, “하다” (hada) action verbs are similar. They are always hard at work, so sometimes we tell them to take a break. We tell them “not” to work. We do this by giving them a sandwich. Or in other words, we “sandwich” the “안” (an | not) between the beginning of the verb and the “하다” (hada).

Anyone else getting hungry?

Korea is a fashion conscious country, so they are very particular about the fit of their clothes. Clothing is either the precise size, or it’s custom made. No one size fits all!

Well, the same is true of their verbs. If you’ve studied everyday Korean phrases, you may notice specific differences. One great example is from Korean cafe vocabulary.

Let’s say you’re ordering at a cafe in Korea.

“포장” (pojang) is the word that’s often used in Korean when referring to packing up food and taking it to go. It is quite common.

However, this word sounds strange to Koreans if you use it for coffee and drinks.

If you want to order like a pro, make sure you know these differences. Koreans appreciate good fit when it comes to both clothes and Korean vocabulary! Now find a good cafe to try them out. ^^

While you’re learning about the common language mistakes people make when studying Korean, we thought it would be helpful for you to know how to say “Mistake” in Korean.

I’ve made a mistake.

It was my fault.

Integrate these simple 8 rules into your Korean learning and you’ll be talking more and more like a native speaker every day. You’ll commit less and less of these common mistakes Korean learners make. And remember, making mistakes is a part of the process so don’t let that stop you from trying! Even Korean speaking experts are used to making mistakes in Korean grammar. It’s all part of the process of learning.

What Korean mistakes do you hear most often? Leave your comment below!