Do you love Korean movies? This article covers Korean movie genres to help you decide better what to watch on the movie screen. In the past couple of years, not only Korean dramas but Korean movies have been taking a firm grip on Korean cinema lovers worldwide. Not long ago, the movie “Parasite” even won the Oscar for Best Movie! 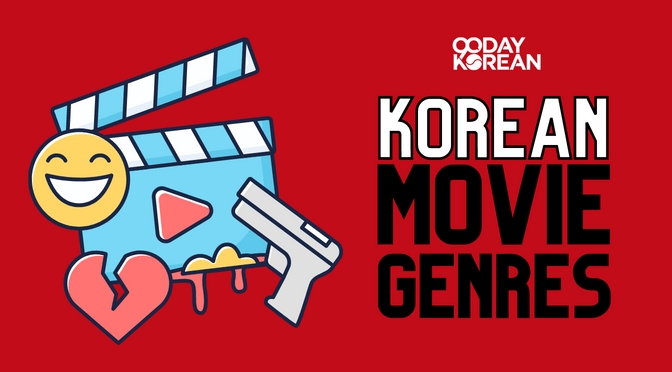 Long before K-dramas and Korean movies started gaining popularity globally, the movie industry in South Korea has been flourishing. And just like in other countries, there are multiple different Korean movie genres that Koreans love to create and watch. And today, we will learn the Korean words for these genres!

What are Korean Movie Genres?

A genre in movies and TV refers to the specific style or themes presented in the film. These include plot points, narrative elements, and chosen aesthetics. For example, a movie may be of the action genre, where you can expect your adrenaline to start pumping. These are great to watch in cinema theaters too! Meanwhile, a movie that is labeled as a comedy is expected to make you laugh, and a horror movie is supposed to be scary.

Now let’s head on to the common movie genres for Korean movies and what they are called in Korean.

The word for “action” in Korean is 액션 (aeksyeon). Action is the type of movie genre that typically involve combat fights with bad guys, some types of chases, and multiple explosions, with some type of a hero as a central or lead character.

Many action films also feature either superheroes or spies. Good examples of Korean action movies are Train to Busan, Oldboy, and Tsunami.

The word for “comedy” in Korean is 코미디 (komidi). These are the types of movies that are supposed to make their audience laugh. This can happen through means of jokes or funny events, such as a character being clumsy.

Romantic comedies are an especially popular subgenre, and the word for “romantic comedy” in Korean is 로맨틱 코미디 (romaentik komidi). Movies combining comedy and action into one are also quite popular.

The comedy genre also includes black comedy films, which are not necessarily as funny as other comedy movies. Good examples of Korean comedy movies are Baby and I, Spellbound, and Miracle in Cell No. 7.

The word for “drama” in Korean is 드라마 (deurama). These movies typically try to provoke some sort of thoughts or feelings in people and tend to be more rooted in realism than other movie genres.

For example, movies can tell the stories of romances. These typically involve a love story between two main characters. In this case, it may even be called a romance movie. The word for “romance” in Korean is 로맨스 (romaenseu). Teen dramas are also a popular topic for movies.

The subgenre melodrama – 멜로 (mello) in Korean – also exists, and these movies typically have a story that is more sensationalized and pursue heightened emotions than other types of dramas.

Good examples of Korean drama movies are Mother, The Handmaiden, and Ode to My Father.

The word for “horror” in Korean is 공포 (gongpo). These movies usually intend to make their audience scared in some ways. It can be a supernatural movie involving ghosts, demons, zombies, vampires, or other creatures, in which case they may be quite tense or more like a horror-action film.

It can also be a slasher film, where many people typically get killed by one killer or by a group of killers. Good examples of Korean horror movies are The Wailing, The Host, and Gonjiam: Haunted Asylum.

The word for “sci-fi” or “science fiction” in Korean is 에스에프 (eseuepeu). This movie category often takes place in the future or otherwise deals with elements from science, technology, futurism, and space.

They can take place in a dystopian or post-apocalyptic universe, where human life and society as we know it now have collapsed for some reason. They may include some fantasy elements, and it’s not uncommon for aliens and space travel to be present.

The word for “thriller” in Korean is 스릴러 (seurilleo). As these movies are typically quite mysterious and filled with suspense, they may also be called suspense or mystery films. The two main subgenres are psychological thrillers and mystery films.

In both cases, tension builds up during the movie, and the moviegoers are only given breadcrumbs of the full story, and there is often a big plot twist in the ending. Good examples of Korean thriller movies are Parasite, Memoir of a Murderer, and Tell Me Something.

The word for “war” in Korean is 전쟁 (jeonjaeng). These types of movies typically combine several different movie genres, such as action, drama, and historical.

Very often, they depict actual events that happened in Korean history, with Korean War being one great example. You’ll also get to learn a lot about Korean culture through these movies.

These movies can either focus on the war itself but also center more so on specific characters and how the war affects them. Good examples of Korean war movies are Brotherhood of War, The Admiral, and The Front Line.

Besides the genres mentioned above, the Korean movie scene is also vibrant with other categories of movies, such as animation and fantasy movies. You can also find a Korean versions of some Hollywood films. Movie genres in Korean films are truly surprisingly diverse!

What are your favorite types of movies? How many of the movies mentioned above have you watched? If you haven’t seen any of these yet, try watching them with your friends. We guarantee it’ll be fun! Let us know your favorite one in the comments!

Now let’s head on to the different genres of Korean music this time!