With history as long as the Korean peninsula, Korean myths and legends also grew into existence throughout time. If you are a fan of Korean dramas, you’ve likely already been introduced to some Korean legends with supernatural stories.

However, the real legend behind the inspiration can oftentimes be quite different from what you saw in the drama – and a lot grimmer. 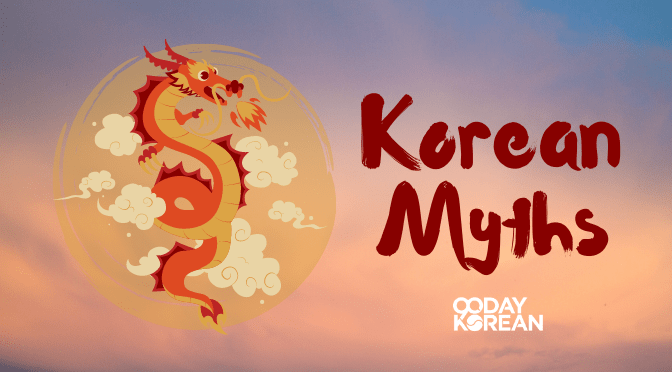 If you are interested in learning more extensively about Korean mythology, keep reading to find out some of the most famous ones!

What is Korean mythology?

Korean mythology or myths are folk tales or legends from different areas of North Korea and South Korea that have become part of the Korean culture. It’s a combination of local myths and influences from religions like Korean Shamanism, Buddhism, Taoism, and Confucianism.

The earliest written records of these myths were formed in the 12th century. But of course, these folktales have existed in an oral form much longer than that.

Some of the mythological stories seem to be well-grounded and quite factual, while others have supernatural flares in them. And just like in other Asian countries, the elements of Buddhism, Taoism, and Hinduism have strongly influenced these myths as well. Each story still remained even when Confucianism became the main religion in Korea.

There are numerous mythological stories like a creation myth and legendary creatures out there that are absolutely fantastic! But there are a few especially special ones that you’ll probably find interesting. Here are some of them.

Thanks to a fairly recent Korean drama starring actor Gong Yoo, the goblin has probably become the most famous mythological creature in Korea. However, the real legend of a goblin is actually quite different from the drama’s story!

The real legend goes as follows. Goblins are formed from objects which have been discarded when they are stained with humans’ blood. They bear no similarity to human appearance.

In fact, each goblin may look different from another, but each of them is supposed to look fearsome, as well as to simultaneously strike awe in those who’d look at them. Supposedly they only have one leg on the right side.

Goblins are quite mischievous and will play jokes and riddles on travelers passing by and might even challenge them to wrestling matches. They could also carry magical objects.

Korean ghosts are fairly similar to ghosts in other countries. They are also see-through and float in the air without legs to be seen. However, they are almost always females, with long black hair, white funeral clothes donned, and a creepy stare stuck on their faces. There are other kinds of ghosts as well, but this is the most common one. 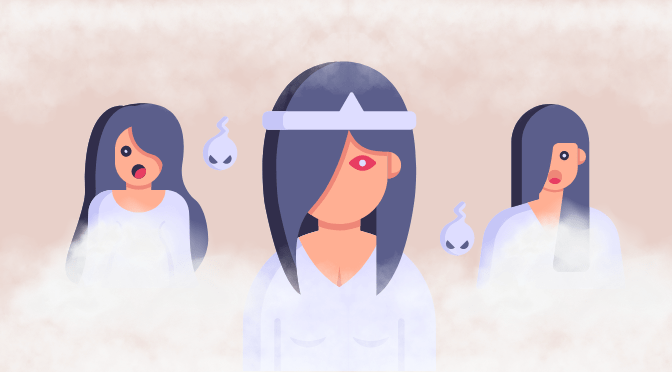 One type of this kind of ghost is often gets referred to as the virgin ghost (처녀귀신 | cheonyeo gwisin). This legend may have been created to strongly encourage young women to get married.

Another type of ghost that often appears in a similar appearance is the water ghost (물귀신 | mulgwisin). These ghosts were people who died a lonely death by drowning in large bodies of water, such as Han River. Now they haunt living beings, trying to get them to join them underwater.

Just like in other cultures, ghosts in Korea are typically present because of some unfinished business, such as to get revenge. They hang out in abandoned places and graveyards and may make the air go chilly or fling objects around when they want to get someone’s attention.

Also featured in several Korean dramas, the Nine-tailed fox is a popular creature in Korean myth even in the present day. Its portrayal in Korean dramas is usually of a beautiful girl cursed to become this creature, one that is unable to find love without entrapment.

The K-dramas starred by actress Shin Min Ah and actor Lee Dong Wook respectively, are some of the most popular Korean dramas featuring a gumiho.

The real legend is even sadder and more horrifying. The creature is more fox-like but retains the ability to transform into a beautiful girl so that it could lure men close enough to eat their livers. However, if the creature is able to stay off from eating human flesh for a thousand days, it can stay human.

These creatures were largely influenced by Chinese dragons, hence why their appearance is also similar. Unlike the Chinese dragons, Korean dragons sport a long beard and carry an orb, which in Korean is called 여의주 (yeouiju). They’re seen as good-natured creatures that were related to farming and especially water. If you visit Seoul, you will often see this too. 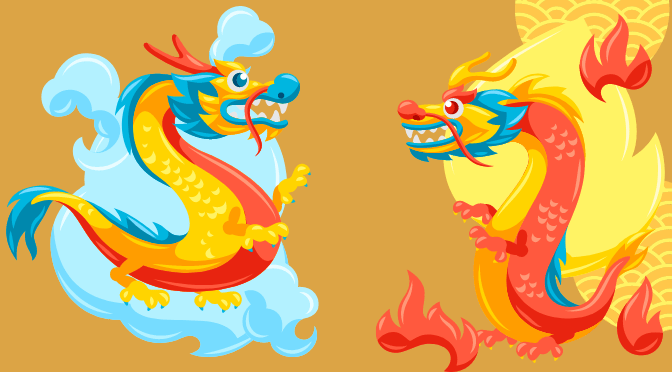 Another creature under this category is the gyeryong (계룡), also known as Korean cockatrice or chicken dragon. They are chariot-pulling beasts for important legendary figures in Korea or for the parents of legendary heroes.

One of these legends was the founding of one of the three kingdoms of Korea, the Kingdom of Silla. It was said that the princess had been born from a large egg of a cockatrice.

It was even said that dragons were the summoners of Korea’s rainy season. Korean dragons are also referred to as 이무기 (imugi), so technically speaking, they can also be seen more as sea serpents than dragons if they are not holding the orb.

As this is the official symbol of Seoul even in the present day, you’ll easily find statues of this creature outside numerous buildings. The creature has the body and head of a lion, with curled horns on its head. Its entire body is also covered in armor-like scales.

It is believed to be a guardian that keeps evil omens at bay and also upholds justice. It also serves as a guardian that wards off natural disasters. This creature is sometimes also called Haechi. Thus, already in the times of the Joseon Dynasty, many officials were keen to have this creature embroidered onto their official gowns.

Also known as the jade rabbit, this is another mythical creature that was adopted into Korean folklore from Chinese myth. The legend goes this particular rabbit was found by looking at the formations of the moon’s craters. Now it is an important symbol of Chuseok, supposedly pounding its pestle to get rice cake.

저승사자 (jeosung saja) is the Korean grim reaper. They’re meant to guide those who have just passed away into the afterlife. Traditionally they wore a black hanbok coupled with a black hat. But today, they are portrayed more often as wearing a long black coat with a fedora, especially after the portrayal of Lee Dong Wook in Goblin. 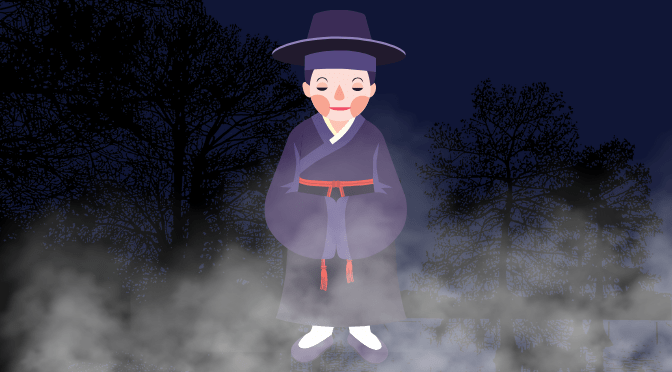 Because a grim reaper is usually met upon death and is considered a bad omen, the Jeosung Saja is a feared figure among Koreans. Of course, you wouldn’t want to cross paths with one!

Legend says that these dogs originated from the kingdom of darkness. Its Korean term is Gamangnara (가망나라). The folklore tells that bulgae are the reason behind the moon’s eclipses. In the legend, the Ganamngnara’s king had so many concerns over the kingdom’s darkness so he sent out these fire dogs to capture the moon and the sun.

Sadly, each moon and sun proved to be too hot or too cold for these dogs to handle. Thus, they would burn or freeze when they tried to carry them over to the kingdom. The king, however, would not give up and kept sending more dogs to retrieve these things. And therefore, a lunar or solar eclipse occurs each time a dog tries to retrieve the moon or the sun for its master.

This creature was the primary symbol of the times of Goguryeo Dynasty. According to beliefs, the three-legged crow lives in the Sun. Thus, they were seen to be sun gods, and they actually had mightier powers than dragons. 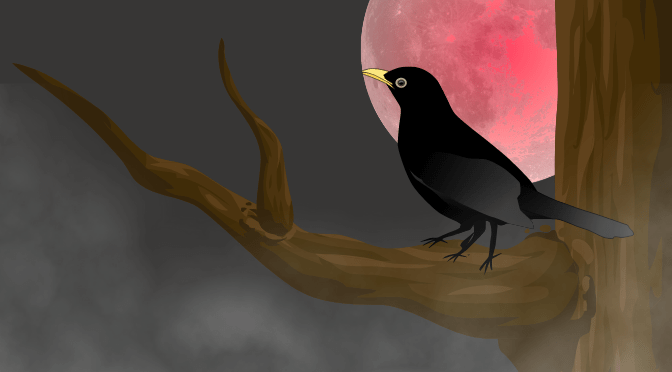 In addition to these mythological creatures, Korean mythology also entails numerous different kinds of gods, as well as notable human beings. Many of these creatures also appear in more than just one particular Korean folklore.

The last one on the list does not focus on a single creature, but this is one of the popular founding myths in Korea. It’s about a god called Hwanung, the Heavenly Emperor Hwanin’s third son.

He told his father that he would like to rule the humans on earth, as he is worried for their sake. The Heavenly Emperor agrees to the plan, and so the god descends from heaven onto the mortal realm and begins his reign. 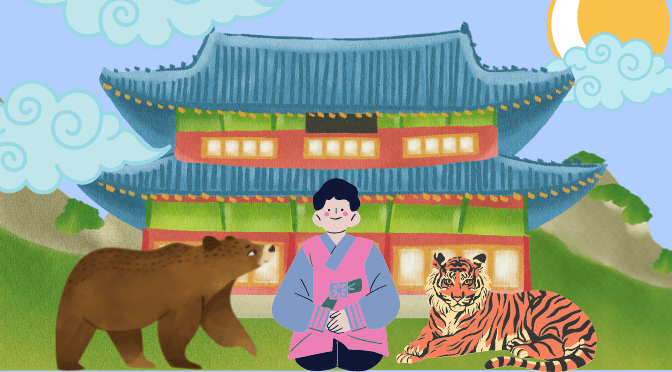 He was equipped with Three Heavenly Seals (천부사민, cheonbusamin), three thousand servants, and also the Three Lords: cloud, rain, and wind when he arrived on earth, at the top of Mount Taebaek. Here, he establishes the City of the Gods, Shinshi. He took care of 360 different human affairs, in a variety of different life aspects, from agriculture to justice.

The god was approached by a tiger and a bear who were wishing to become humans. Hwanung ordered them both to stay inside a dark cave for 100 days. He handed them twenty cloves of garlic and some mugwort for food while in the cave.

The tiger could not persist through and eventually ran away. On the other hand, the bear remained patient and turned into a beautiful woman on the twenty-first day. She was given the name Ungnyeo (웅녀), which stands for Bear woman.

After a little while, Ungnyeo began to express wanting to have a child. To complete her wish, Hwanung took on a mortal form for long enough for Ungnyeo to conceive and give birth to a baby boy. Their son, Dangun, was the forefather of the Korean people. This led to the creation of the kingdom of Asadal, which stands for “place where the morning sun shines.”

Eventually, this kingdom’s name was changed to Joseon – and, then, of course, it became Gojoseon. The Korean legend goes on to tell that Dangun remained in human form for 1908 years. Then he finally left the human world and ascended to his position as Mountain God, Sanshinryeong (산신령).

So if any of these myths got you really interested, you’d be happy to know there are a lot of different stories from far back in Korean history that you can enjoy reading and listening to today.

Isn’t it wonderful how many interesting myths and legends there are in the world? Maybe you can even ask your Korean friends to introduce you to their favorite folklore from Korea, especially! Which is your favorite story? Let us know in the comments!

If you’d like to know more about Korea, here are some interesting facts about the country.