Korean Work Culture – Things to know about jobs in the South

South Korea is known for its very rich culture, and in this article, we’ll focus on one of its aspects, the Korean Work Culture.

Every country has its own food and art culture, so of course, they also have distinct work environments. South Korean work culture may just be one of the most unique work cultures in the world. 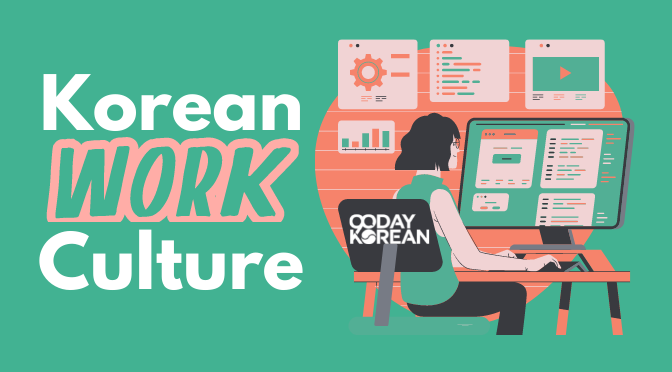 Let’s get to work!

If you’re looking for jobs in Korea in the future or otherwise wish to understand and assimilate into the country, it’s important to understand the different aspects of its work or the Korean business culture. We’ve listed several items to note regarding Korean culture at work to help you know what to expect if you ever land a job in South Korea.

How to get the job

South Korea’s job application process works in a very similar fashion to other countries. Here are a few methods of how to apply for a job.

A job gets advertised on a job portal, you send the recruiter your resume and self-introduction (otherwise known as a cover letter) in hopes of being considered for the position, a job interview follows, and so on. This method applies to most South Korean companies, especially for positions that are above entry level.

However, twice a year, there is a big season for job applications, specifically for those just about to graduate from university. Though, the applications aren’t limited to recent graduates only. It’s mainly arranged by big conglomerates like Samsung, LG, and Hyundai, and it’s far more vigorous as a process than finding a job through a job portal.

First, you send in your resume and self-introduction like you would to any job, but before you can get an invitation for a formal job interview, you have to sit through an exam which you’ll likely have to study! Just try to recall your college entrance exam! Also, these big job application seasons are more for entering specific companies themselves rather than applying for one specific job position.

If you’re unsure about how to make the best impression in your interview, be sure you’re familiar with Korean business etiquette. It might also be helpful to know South Korean etiquette and customs.

Once you get the job, the next thing that you need to know is the work environment in Korea. Here are some important things to take note of.

South Korean working culture has clear hierarchical structures in it, and Korean work culture is no different. While there may be some confusion sometimes over what your actual job position is, it’s always clear where you stand in the food chain. And the higher, the better.

This means that it may sometimes be tough to be the newbie – especially since you’ll continue to be the newbie until another new person is brought onto the team. Your opinions won’t carry as much weight in team meetings, it’s hard to say “no” to those with seniority over you, and sometimes your seniors may even be purposefully brusque just because you’re new. But at the same time, Korean companies also value close-knit teams and cohesive company environments. There will be the yearly Membership Training event, either for just the team or sometimes the whole company. At this event, the group will go on an overnight excursion to the countryside together. There might be other types of Korean company parties as well.

What language is used?

Most offices use Korean as their primary language. However, that depends on the type of company. In Korean corporate culture, some multinational companies may use a mix of Korean, English, and other languages.

These days, it’s usually a requirement for Korean applicants to have some kind of TOEIC score to demonstrate their English abilities. However, they may not actually need to use English in the office.

Because of the hierarchical systems, you will probably notice Korean workers using honorifics at the office. This is one example of how culture and language are integrated in the Korean workplace. If you are interested in learning Korean, then go here for a complete guide.

To keep the team environment with your co-workers as close to family as possible, the company will also often have group dinners. In other words, on occasion, the team will leave the office together to go have dinner, drinks, and possibly even a karaoke session.

This particular part of Korean work culture is also highly dependent on the company and the team. Some teams may enforce this activity several times a week, while others do it less than once a month or even just once a year.

On paper, the hours stated in the contract don’t sound all that bad, with 9 AM to 6 PM being pretty standard. So at a quick glance, there may not seem to be a difference in your home country’s working hours.

Unfortunately, there’s also a big unwritten rule that you’re expected to work overtime quite regularly. It’s also often frowned upon to leave the office before your boss has left. This means that Koreans typically work far longer hours than stated in their working contracts. And they may not even receive any type of compensation for it! Now, just because the hours get stretched out like that doesn’t always mean the workload is massive. Instead, you may not even have that much to do overall throughout the day. This may sound like an inefficient use of time, especially if you have Western sentiments of productive workdays.

But for those who don’t like to rush through their work, it may be ideal. Alternatively, overtime may also occur only when the employee got tasked with an urgent job to do towards the end of the day.

However, on the flip side, before you get absolutely freaked out over the working situation in Korea, some good news may be in store. Recently the government has been enforcing laws to shorten the work hours per week. In other good news? Not every company in Korea is like this, to begin with! This means that there is still plenty of opportunity for a work-life balance.

Working overtime, as mentioned above, is usually a part of the corporate culture of more traditional companies like Samsung. But many of the companies you’d apply to via a job portal are entirely different, and the overtime culture doesn’t exist. However, even then, it may be hard for some Koreans not to follow it. But it’s unlikely anyone will be expecting that of YOU!

To sum up, the Korean work culture is definitely not the easiest one in the world. However, it’s important to understand the general and traditional culture values and the Korean society that it stems from. The more you learn about Korea, the easier it becomes to navigate successfully.

It’s also good to note that positive changes are happening! Especially among the more modern companies with the younger generation of employees, there are already many companies offering much better working environments for their employees.