How to Say “Maybe” in Korean

Yes is  네 (ne)  and no is 아니요 (aniyo), but do you know how to say “maybe” in Korean yet? If your answer to this just so happens to be ‘maybe’, or perhaps even ‘no’, then this is the lesson for YOU!

Today you’ll learn the ways how to say “maybe” in Korean, and whatever using that word can bring about for you. Just maybe this is the word to jumpstart your Korean language learning journey. Get your notebook and pen ready, and let’s get going! 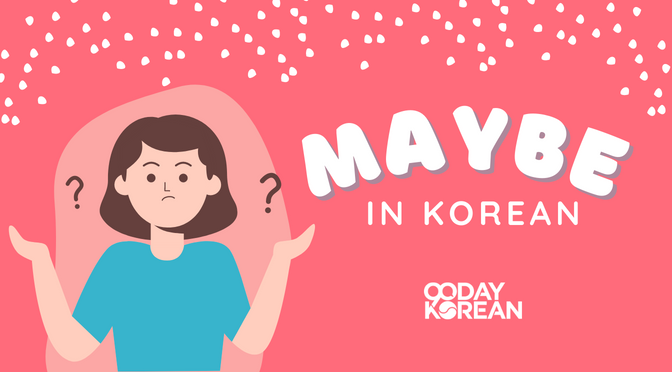 If you want to say “maybe” with the meaning of “by any chance” (as in “can you maybe help me with this?), then using the Korean equivalent of 혹시 (hokshi) is the way to go. In turn, if you’re using the word “maybe” with the connotation of “I wouldn’t know” or leaning towards the negative (as in “Maybe that’s the answer, maybe it isn’t”) then you should say 글쎄요 (geulsseyo).

By any chance, wanna go to that party together?

I wouldn’t know, that appointment hasn’t been finalized yet.

How to say “Maybe” in Korean

The Korean words for “maybe” can be used in two ways. You can either use them as a reply or in sentences when you’re not sure about something, but you’re making a guess about it.

Here’s an example when using it as a reply:

Are you going to the party?

Below are examples when making a guess about something you are unsure of:

Maybe it will rain again tomorrow.

Maybe I can finish all of my work by 6.

The word “probably” in Korean can be expressed with the words 아마 (ama) and 아마도 (amado). Both words are casual versions. You can use 아마도요 (amadoyo) if you want the polite version.

He probably went to the cafe.

Perhaps I can help.

This is perhaps his best novel to date.

Perhaps everything he said was true.

Maybe, just maybe, you now know how to say “maybe” in Korean? We’d love for you to show us your mad skills! What word would you like to learn next? Let us know in the comments below and maybe your choice will be our next article!