Did you know that Korean Memorial Day is celebrated too?

If you are from the United States, chances are you might be familiar with the public holiday. Other countries are also familiar with Memorial day and often have celebrations to commemorate that day.

In this article, we’ll tell you all about this important day in South Korea: Its history and how south Koreans celebrate it around the country. We will also teach you the Korean language term for Memorial Day! Let’s get to it. 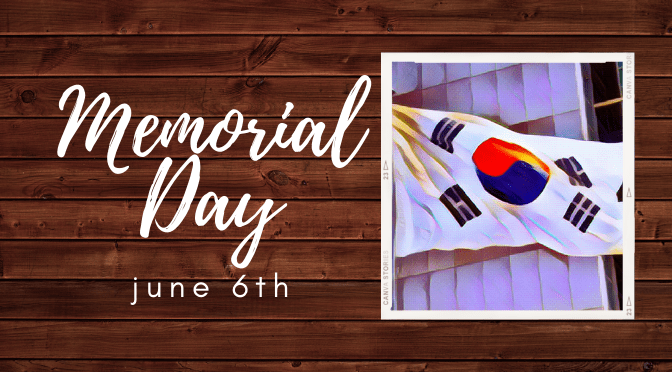 We used several words in this article that are in Hangeul (the Korean Alphabet). If you want a structured course that will help you learn Korean in a fast and easy way, you can check out the 90 Day Korean Membership Program. It uses proven methods that will help you have 3-minute conversations in Korean in the first 90 days!

When is Memorial Day in Korea celebrated?

Memorial Day in South Korea is a public holiday occurring on June 6th of every year. It’s a yearly event with a long history and is celebrated by regular citizens and influential public figures.

What is Korean Memorial Day?

Apart from heroes of the Korean wars, the holiday also celebrates other soldiers and the patriotic people who are still serving the republic.

How to say “Memorial Day” in Korean

In the Korean language, Memorial Day is called 현충일 (hyeonchungil).

Now when you see it marked in a calendar in Korea, you’ll know what it means! You will also be able to understand your friends from Korea when they speak to you about 현충일 (hyeonchungil).

This national holiday has been celebrated in South Korea since 1956. It was declared a public holiday on April 19 of 1956, specifically after the end of the Korean War.

When the Korean War began, it was very devastating for the people of Korea. It eventually split the Korean Peninsula into two countries – North Korea and South Korea. The war began in 1950 and ended in 1953. It did not take long after the ending of the Korean War for June 6th to be declared a public holiday to commemorate soldiers who sacrificed their lives during Korean War.

This holiday also recognizes soldiers who served during prior conflicts that happened on Korean soil and fought for Korean independence.

The battle of Cheongsanri is one of the battles that are significant to the Korean nation. The casualties of this battle are also remembered during Memorial Day in Korea.

In April of 1956, the South Korean government designated June 6 as the Korean Memorial Day.  Prior to that, the month of June has been viewed as a month dedicated to the veterans of war and patriots of South Korea since 1954.

Why is Memorial Day important?

Memorial day is important because it helps South Korean remember the sacrifices that soldiers made for the nation.

How do people celebrate Memorial Day in South Korea?

Since 1956, a memorial ceremony has been held at Seoul National Cemetery, with the president of South Korea, other government officials, and civilians taking part in the location. Regular citizens and public officials alike gather and pay respects to the war dead.

In 2020, a very special Memorial Day was had, as it also corresponded with the 100th anniversary of victory in the Battle of Bongoh Town. On this day in 2020, the president of South Korea, Moon Jae-in, declared this as the most significant war victory in the history of the Korean Independent Army.

The solemn event is marked by one minute of silence and remembrance of all the sacrifices their countrymen had to face to serve the republic.

Even the cars and people on the streets will stop during this moment to offer their respect and pray for the war soldiers who died for this great country. It is also common for civilians and military officials to lay flowers on the graves of the soldiers who died due to the Korean War between North Korea and South Korea.

The Seoul National Cemetary is a usual place for memorial ceremonies during this day. A song known as the Memorial Day Song, or 현충일 노래 (hyeonchungil norae), is played during the memorial ceremony as some spectators watch.

It is also common for some business establishments and even households to proudly display the Korean national flag on their front doors during June as a sign of respect and honor the sacrifices of the Korean soldiers who have died for their country.

Before Memorial Day, some events will also be held in different schools around South Korea, in which students will make drawings related to the day. Alternatively, they will write letters to the soldiers currently serving at DMZ (demilitarized zone) between North Korea (Democratic People’s Republic of Korea (DPRK)) and South Korea (Republic of Korea).

Students also participate in the holiday by discussing in school the significance of the day and how the acts of these brave soldiers have impacted Korean history.

So there you have it! We hope you enjoyed these some important facts about Memorial Day in South Korea.

Does your country also have holidays similar to Memorial Day? How is it celebrated? Have you ever been to South Korea during their Memorial Day celebrations? Let us know below in the comments!