How to say “Nevermind” in Korean

In this lesson, you will learn how to say “nevermind” in Korean. 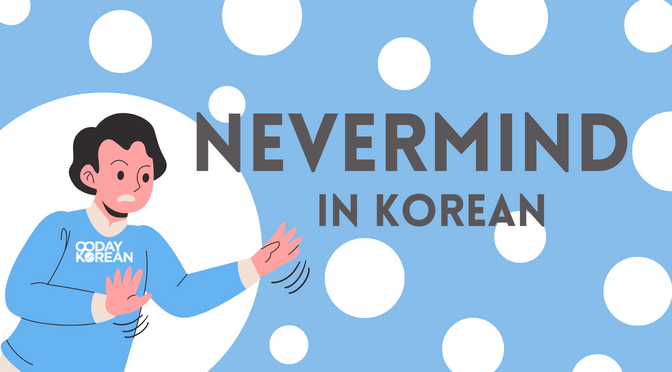 “Nevermind” is a great little phrase to add to your vocabulary. Read on for explanations, alternative phrases, tips to remember them, and sample sentences. Or just get the 80/20 below!

There are different ways to say “nevermind” in Korean, depending on who you are speaking with. Here are some of them:

The first way to say “nevermind” is by using the phrase 신경 쓰지말아요 (singyeong sseujimarayo), which is the formal version.

It means “don’t mind about something.” Although the word “nevermind” is rather informal in general, if you must use this with someone you are not as close with, then 신경 쓰지말아요 (singyeong sseujimarayo) is the choice to go with. Though, do stay cautious about using it in formal situations.

If you’re talking to your friends or people you have a close relationship with, you can say it informally by using the phrase 신경 쓰지마 (singyeong sseujima).

Pay no mind to his words.

Nevermind, it’s not like you know who that actor is.

Nevermind, I’ll do it. 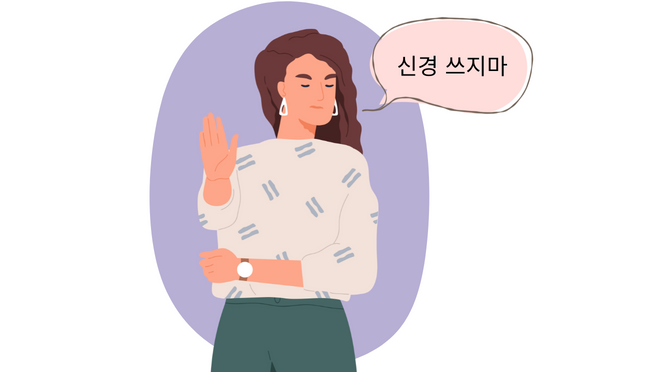 To remember how to say “nevermind” in Korean, we’ll create an English association for it. This can be any word, phrase, or image that helps you recall the Korean word and its meaning.

So how can we remember 신경 쓰지마 (singyeong sseujima)? First, we’ll create a background story: Suzy is your baby sister, and her crying really stresses your mom. You want to comfort her, so you tell her it’s singing, not crying.

Other phrases related to “Nevermind” in Korean

Apart from the formal and informal versions of “nevermind” above, here are other ways to express this phrase to someone in Korean. 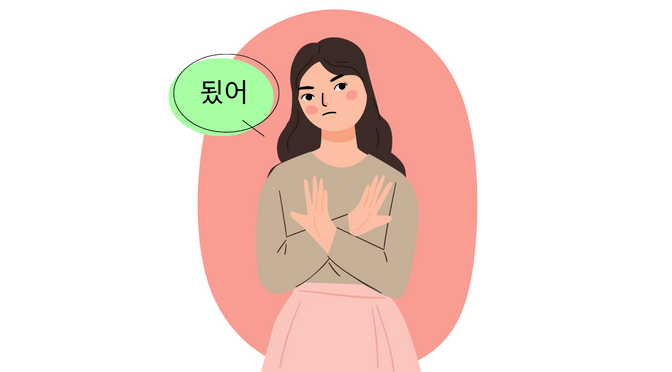 “Forget about it” in Korean

Another largely used way to say “nevermind” or “forget about it” in Korean is 됬어 (doesseo). However, this one is incredibly informal, so only use it with a close friend or a significant other.

It is also solely used with the meaning “forget I said anything,” so be sure that is the meaning you want to express before using this. If you are unsure, you may wish to use 신경 쓰지말아요 (singyeong sseujimarayo) instead.

“Don’t worry about something” in Korean

One more way to say “nevermind” in Korean is 걱정 말아요 (geokjeong marayo) – or 걱정 마 (geokjeong ma) when speaking informally. However, this one has a meaning closer to “don’t worry about something,” so you may not be able to use it in every situation.

While you can study the words in this article by reading their romanized versions, it will come in handy for you to be able to read Hangeul if you ever wish to come to Korea. Hangeul is the Korean alphabet, and not difficult to learn. In fact, you can learn it in just 90 minutes.

What situation would you like to hear ‘nevermind’ used in? Let us know in the comments below!

4 replies to "How to say “Nevermind” in Korean"