How To Say “Park” In Korean

In this Korean lesson, we will take you through the ropes of how to say “park” in Korean. There are a surprisingly large number of small – and big – parks hidden away in the different neighborhoods of Korean cities, and in just a few minutes, you’ll know just how to refer to them.

It’s important to have a strong foundation of Korean vocabulary since many words relate to one another. And what about other types of places with “park” in their name, such as amusement parks? You’ll also learn whether the same word applies to them or not! 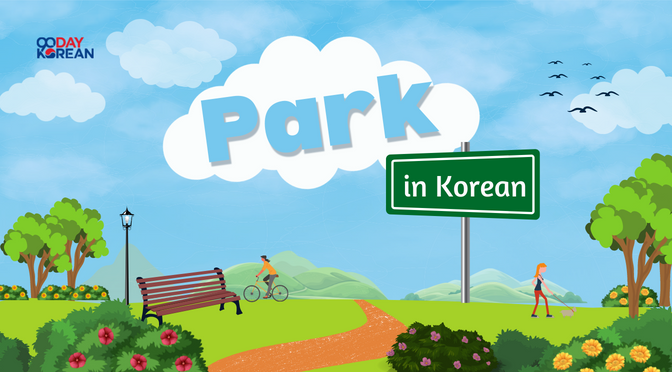 The Korean words in this lesson will be written in both Hangeul (the Korean Alphabet) and romanized Korean. It’s easier to pronounce the words correctly if you know how to read Hangeul. We recommend learning the  as soon as you can.

The word for how to say park in Korean is 공원 (gongwon). No matter which type of park you are talking about – a regular one, an amusement park, a zoo, and so on – this is what you add after the word that denotes the type of park. Here are some sample sentences to help you how to use this word along with other parts of Korean grammar.

How many national parks are there in Korea?

Our home is on the West side of Children’s Grand Park.

I go for a walk in the park every morning.

When you were in Africa, did you also visit a wildlife park?

In the future, I want to make an ecological park.

Would you like to go to an amusement park or the zoo?

There is a park that’s a great place to relax right next to my hometown home.

However, when you are referring to famous parks from other countries besides South Korea, such as Central Park, instead of the word 공원 (gongwon) you should use the word 파크 (pakeu). This is the Konglish form of the word park, and it is not used in Korean outside of the names of these worldwide famous parks.

Have you ever been to Central Park?

How to remember “park” in Korean

To remember the Korean word 공원 (gongwon), we can create an association in English. Associations can be any similar sounding words or images that help you remember the meaning, in this case, “park.”

We’ll create an association in English that sounds similar to the Hangeul. It kind of sounds like gong once (the verb form of “gong” as in “to strike a gong”). “Gong once if you want to go to the Park.”

If you don’t like this association, you can also make your own. What associations did you think of to remember 공원? Let us know in the comments below! Are you ready for a walk in the 공원 (gongwon) now? What words would you like to learn next? Let us know in the comments below!