Religion in Korean – Vocabulary on the country’s beliefs

There are several religions present in Korea. In this article, we will discuss how to say “religion” in Korean, along with other related vocabulary. The words and phrases in this lesson can help you practice speaking in Korean and easily understand conversations on the topic. 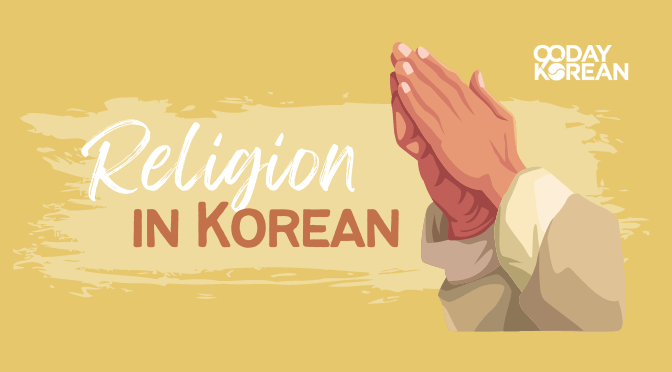 How to say “religion” in Korean

The Korean word for “religion” is 종교 (jonggyo). We will also be introducing you to some Korean vocabulary and sample sentences related to the matter. As we go through this article, you will notice that the Korean words for specific religions also end with -교 (gyo).

Now you’ve been introduced to the different religions dominating South Korea, as well as their background. Perhaps you would also be keen to learn some religious terms with these words related to religion.

The word “god” in Korean can be expressed in a number of ways. You can say it as 하느님 (haneunim) if you’re talking about the god above the sky.

You can use 신 (sin) if you are referring to a god of something. For example, 사랑의 신 (sarangui sin). This means “god of love.”

On the other hand, you can also say 하나님 (hananim) if you’re talking about “the one and only God.” This is usually used by protestant Christians.

“God bless you” in Korean

There are a few ways to say “God bless you” in Korean, depending on who you are speaking to. You can say it in a formal or informal way.

“God bless you” in Korean (Formal)

“God bless you” in Korean (Informal)

However, 부처 (bucheo) is normally used in the name of holidays related to Buddha.

For example, 부처님 오신 날 (bucheonim osin nal). This is the holiday name for Buddha’s Birthday.

The name of Allah is expressed as 알라신 (allasin) in Korean.

There are 2 Korean words you can use to say “pray.” You can use 기도하다 (gidohada) when you’re praying for something or someone.

You’ll use 기원하다 (giwonhada) when you simply want, hope, or wish for something.

The Korean word for “church” is 교회 (gyohoe).

If you want to talk about a specific religion’s church, such as “Catholic church,” then you can say it as 가톨릭 교회 (gatollik gyohoe).

To further practice the vocabulary above, here are some sample sentences that you can use.

That’s it for the vocabulary related to religion in Korean. If you’d like to know further about the different religions in Korea, we also have a separate article for it.

If you’d like to learn the interesting superstitious beliefs of Koreans, you can head on over to this article.

Is your religion also on our list above? Let us know in the comments below!