“Sad” in Korean – Vocabulary for when you feel blue

In this article, we’ll teach you how to say “sad” in Korean. None of us can help it, we all feel unhappy sometimes. And there’s nothing wrong with it! You will likely even come across situations where you will feel negative emotions while living your life in Korea, be that homesickness or something else. 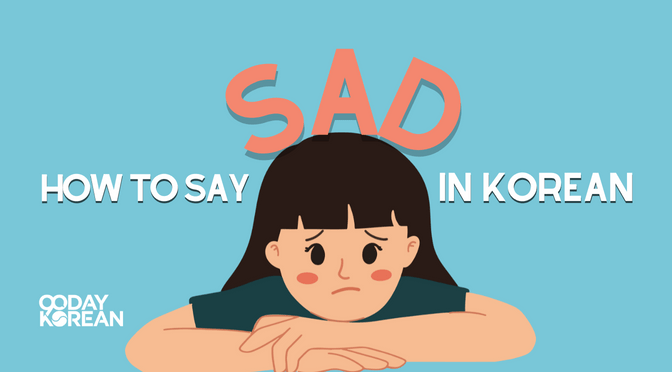 In those moments, wouldn’t it be fantastic to be able to explain how you are feeling to your local friends and maybe even connect more closely with them?

Read on as we teach you the most common word for “sad” in the Korean language, as well as some sample sentences that will get you started using this new vocabulary.

How to say “sad” in Korean

In Korean, the word “sad” is a basic part of the vocabulary too. The dictionary form for “sad” in Korean is 슬프다 (seulpeuda). This is typically the first word related to the unhappy emotion that you will learn in Korean.

Below you can quickly go over how the usage of the word changes based on which formality level you are speaking from.

The formal version of “sad” in Korean is 슬픕니다 (seulpeumnida).

You can use this formal way to express the emotion of sadness when you are talking to someone much older than you or who is of higher authority than you. Here is an example sentence of the word in use:

I am sad because of work.

The standard version of “sad” in Korean is 슬퍼요 (seulpeoyo).

This is appropriate to use in most general situations you will come across. Here are some sentences that show you how you can use this word:

Why are you sad?

I’m sad because lately, it rains every day.

Lastly, the informal version of “sad” in Korean is 슬퍼 (seulpeo).

As you may remember from grammar lessons, this form should only be used with your closest friends or those significantly younger than you. Here are some example sentences so you can see how it gets used in action:

Ah, this movie is really sad.

You look really sad. Is everything OK?

I’m really sad because we broke up yesterday.

How to pronounce “sad” in Korean?

The romanization of the word 슬프다, which is seulpeuda, can give you a great idea of how the word “sad” is pronounced in Korean. For comprehensive rules on how to pronounce words in Korean, you may want to refer to our guide on Korean pronunciation.

How to spell “sad” in Korean?

Romanization is a useful tool to use as a guide when you are only getting started on learning Korean pronunciation. However, it is not always perfect in showcasing how a word is pronounced. Thus, you really should learn to read and use Hangeul instead of relying on romanization.

You can always use romanization to support your studies, but learning the alphabet itself is integral to your learning journey. You can use our article on the Korean alphabet to start learning them immediately! 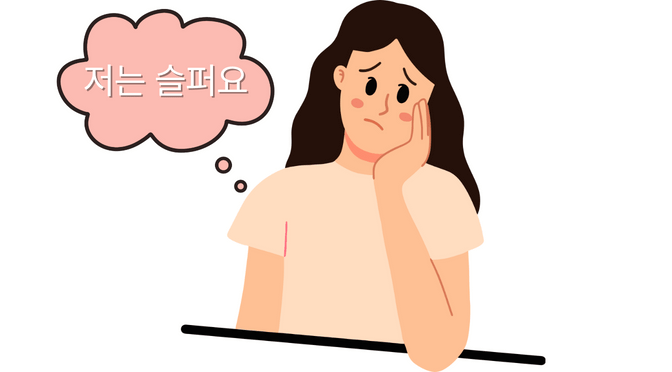 Depending on the level of formality you are speaking with, the way you say “I’m sad” in the Korean language may change a little bit. You might hear these terms in K-dramas, in Korean movies with a dramatic genre, or perhaps sad Korean songs.

Speaking formally, you may say:

Speaking politely, you may say:

And when speaking informally, you may say:

And in some informal cases, even just saying this may suffice:

What is “That’s sad” in Korean?

Using the term for sad you’ve learned so far in this post, the Korean translation for “that’s sad” is 슬프네요 (seulpeuneyo).

However, there may be other words that would be more appropriate to use depending on the situation. This is why next, we will go over other words in Korean that can be used quite similarly to convey unhappiness and similar feelings.

Other Korean words similar to “sad”

Although 슬프다 (seulpeuda) is the general word for “to be sad” and is what many foreign learners are first taught, it is just one expression with which native Koreans speak out about their feelings of unhappiness. It is commonly used as an adjective describing a certain noun.

Firstly, you will want to understand that in the Korean language, there are multiple different words that native Koreans use to describe a sad expression or their equivalent feelings. For example, the word we have presented throughout this post only relates to emotional feelings of sadness.

For other usages, you will want to refer to the words and phrases related to “sad” we will introduce to you below. In casual conversations, native Koreans also use these terms.

“To be a pity” in Korean

“To be a pity” in Korean is expressed using the word 아쉽다 (aswipda). It is used when you want to say something along the lines of “what a pity.”

“To be depressed” in Korean

The word 우울하다 (uulhada) means “To be depressed” in Korean.

You can use 우울하다 (uulhada) quite easily to convey that you are unhappy. It has a more serious edge to it, but it is also not used with as much gravity as its English meaning.

“To be disappointed” in Korean

As the English translation details, the term 낙담하다 (nakdamhada) can be used when you are specifically feeling disappointed over something. It can also be used to describe emotions of discouragement.

“To be disappointed” in Korean

This term is more widely used than the above-mentioned one. You can use it in any kind of situation if you want to express disappointment.

“To be unhappy” in Korean

You can use 불행하다 (bulhaenghada) to say “To be unhappy” in Korean.

You can use this in situations where you want to convey the very opposite of being happy.

“To be hopeless” in Korean

“To be hopeless” is expressed as 희망이 없다 (huimangi eopda) in Korean.

This is the term you can use in situations where you want to convey that you are feeling hopeless or that something is looking hopeless, and in other similar cases.

Hopefully, as you learn Korean words for sad, you can now more eloquently express different feelings and situations of sadness! Also, let us know in the comments if there is one particular expression for the sadness you like to use!

Next, maybe you’d like to learn some Korean vocabulary list related to other emotions, so take a look at our lesson on Emotions in Korean.