Weather & Seasons in Korean – Know this for your next trip

In this article, we will be learning about how to say seasons in Korean. Possibly you’ve already checked our lesson for months in Korean, but we’ll also identify and describe what season takes place in those months.

If you’re searching for Korean words related to the weather and the four seasons in Korean, this lesson is perfect for you. This may come in handy if you plan to visit the Land of the morning calm during a certain season. By the end of the lesson, you may very well be able to use Korean words and describe the seasons and even mark your calendar for these four seasons in Korean! 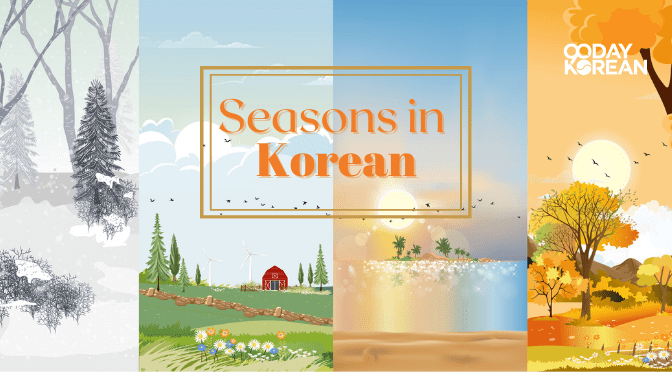 To start, here is a list of the four seasons in Korean. We’ll learn more about them in a while!

Below is a free PDF guide for “Seasons in Korean” that you can download and take with you:

Countries in the world have different types of seasons depending on their location. Some countries have two, some have four seasons. This is determined by certain temperatures, weather conditions, and, most importantly, the Earth’s position in relation to the sun. But for this lesson, we’ll focus more on how to say the vocabulary related to seasons in Korean!

How to say “seasons” in Korean?

There are different seasons in Korea, but the Korean word for “season” is 계절 (gyejeol).

How many seasons are in a year in Korea?

There are also many countries all over the world with four seasons, like the United States and Japan.

What are the seasons in Korean? 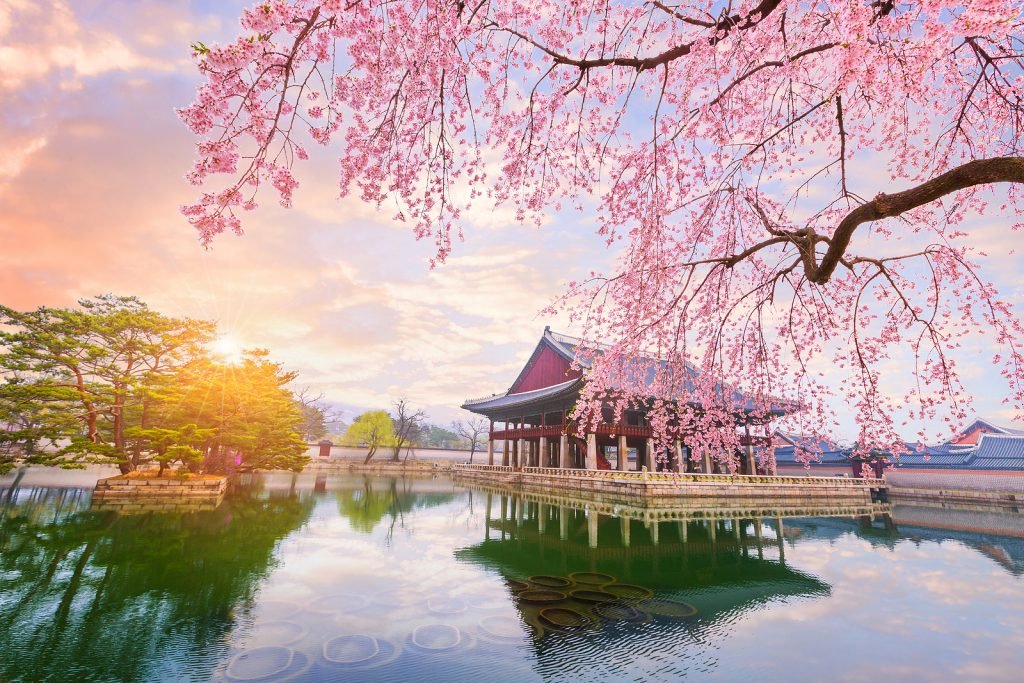 The word for “spring” in Korean is 봄 (bom). It is a fairly short season in Korea, but it is beautiful when all the flowers, like the various tree blossoms, bloom.

Here are some Korean words and sentences related to spring:

My favorite season is spring.

What are you going to do during spring vacation?

I want to go on a picnic on a sunny spring day.

여름 (yeoreum) is the term for summer in Korean. It’s a season filled with hot and humid weather in Korea, with a monsoon season squeezed in.

During summer, the perfect place for a quick summer getaway is the beach. Beach in Korean is called 해변 (haebyeon). While the sea or ocean in Korean is 바다 (bada).

This summer will be very hot.

Be careful of food poisoning in the summertime.

Another short but beautiful season in South Korea is autumn, or 가을 (gaeul) in Korean. You would also use 가을 (gaeul) to say “fall” in Korean. It’s the time of year the mountainous country is filled with beautifully colored leaves.

To help you learn about autumn in Korean better, here are some words and sentences related to it:

I’m free because it’s after harvesting.

The mountain is covered with autumn leaves again this fall.

I swept the fallen leaves in the front yard of my house.

The year’s last (and first) season, winter in Korean, is called 겨울 (gyeoul). Lasting for around three months, temperatures drop in Korea during winter.

In many parts of Korea, it can be quite snowy during the winter months. The perfect time for ice skating!

Here are some Korean words and sentences related to winter:

It’s snowing a lot this winter.

I want to learn ice skating this winter.

We spent a warm winter at the new house.

When do these seasons occur each year?

This question is often asked, especially when people have travel plans to Korea. We’ve learned the words for the four seasons in Korean, but if you plan to visit in a certain month to take a closer look and experience Korea, you need to know what season it will be. Knowing this will not only help you learn Korean but also know more about Korean culture. Let’s read on!

What month is spring in Korea?

Spring in Korea normally happens between April and June. It’s said to be the best time to be visiting Korea because the temperature is just right and all the flowers bloom.

What month is summer in Korea?

The summer season is usually just from July to August. The duration of summer is short, but it can get really hot and humid, so it’s a good time to visit the beach.

What month is autumn in Korea?

Autumn is another great time to travel to Korea, between September to November. Chuseok or the Korean Thanksgiving is also celebrated during this season.

What month is winter in Korea?

If you plan to visit Korea to enjoy various winter festivals, it’s best to go between December to March. It’s good to mark your calendar for this winter-season event! Perhaps you can also visit other key areas in Korea, like Jeju Island, for some skiing and other winter activities. 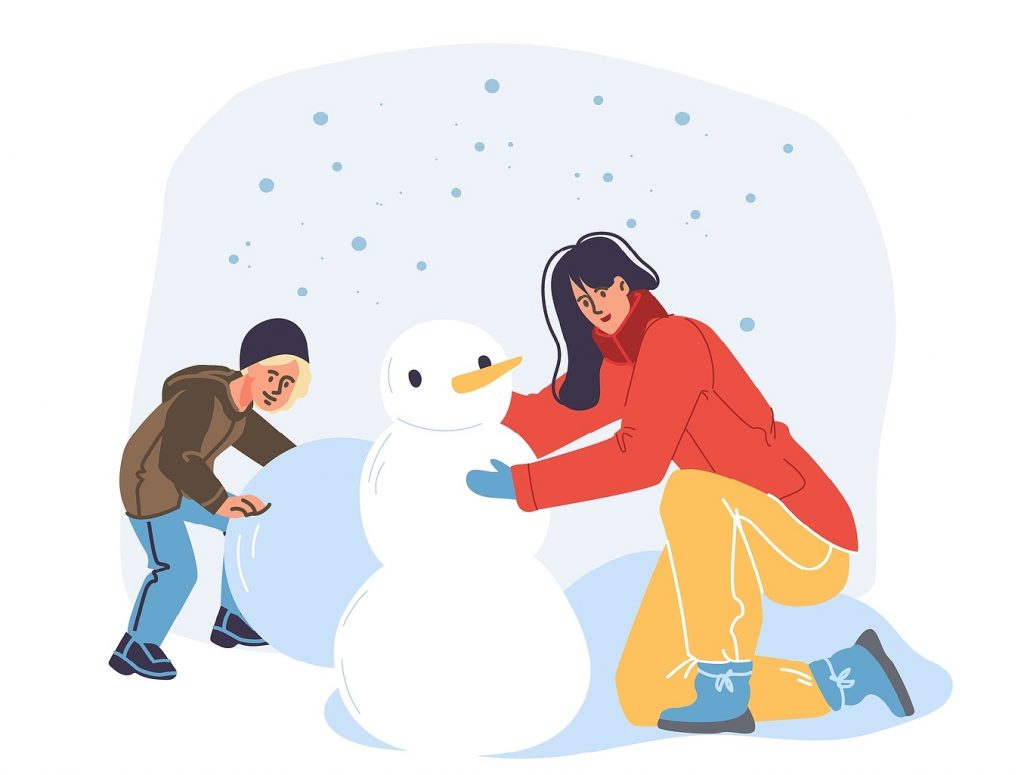 The word 삼복 (sambok), also known as dog days of summer, refers to the three hottest days of the year. 삼복 (sambok) happens between June and August.

삼복 (sambok) is also commonly referred to as 복날 (boknal). These three 복날 (boknal) days have a ten-day interval in between each other. If you’re in Korea or plan to visit soon, you need to know about these three days.

Chobok is known as the first dog day and marks the start of sambok. For 2021, chobok occurred on July 11.

Lastly, the third and last dog day is called 말복 (malbok). August 10 was the date for malbok in 2021.

Interestingly, even though it’s very hot, Korean people enjoy having hot soup during sambok. Specifically, a soup such as 삼계탕 (samgyetang), is the most famous choice.

삼계탕 (samgyetang) is a chicken soup with ginseng.  Since it’s hotter than usual in Korea during these days, most people opt to eat healthier food to avoid any possible health issues due to the heat.

The Korean term 추분 (chubun) means autumn equinox. This is the time of the year when the length of day and night is equal. Chubun falls according to the Gregorian calendar, which is usually around September 23. After this, you can already feel the nights gradually become longer.

As Chubun takes place, people also use the weather to identify having a good harvest from a bad one. If there is rain or dry wind, it indicates a good harvest. If the weather is clear, it may mean there’s not much to harvest.

춘분 (chunbun) is the term used in Korean for the spring equinox. It can literally mean “spring point of division”. This time of the year marks the first day of spring.

동지 (dongji) is the Korean word for Winter Solistice. This day marks the beginning of when daytime is the shortest and nighttime is the longest.

During this day, many Koreans enjoy a bowl of 팥죽 (patjuk) or red bean porridge.

The Korean word 하지 (haji) means Summer Solstice. During this time, daytime is longer than nighttime.

Great, now you know the words for the four seasons in Korean! So, let’s move on to the list below and learn Korean vocabulary related to weather with its English counterpart. With this vocabulary, it will also be possible to describe and understand daily forecasts. 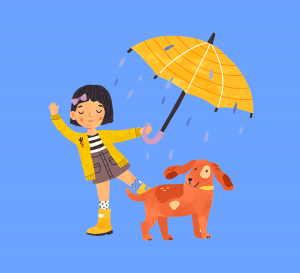 To start, the word for “weather” in Korean is 날씨 (nalssi). In a simple definition, it is the state of the atmosphere, often describing whether it is hot or cold, wet or dry, calm or stormy. Or it could be sunny, cloudy, windy, rainy, and stormy.

There are two Korean words that translate to “cold.” One is 춥다 (chupda), which is used to describe something that makes you feel cold, just like an airconditioned room or a winter day.

On the other hand, the word 차갑다 (chagapda) is used to describe things that are cold to the touch. For example, a cold drink, ice cream, or an ice cube.

This video shows How to Say “Cold” in Korean

How to Say "COLD" in Korean

There are different Korean words for “hot” in Korean. In this topic, the word that we will use is 덥다 (deobda). This describes the hot environment or weather.

There are different definitions for “cool,” but we’ll focus on it as an adjective that describes the cold weather in this lesson. The word for “cool” in the Korean language in this context is 시원해요 (shiwonhaeyo).

However, if you want to know the other terms for “cool,” we have another article saying cool in Korean.

This defines a temperature that contains heat but is not enough to be called hot. There are two terms for “warm” in Korean, which are 따뜻하다 (ttatteuthada) and 포근하다 (pogeunhada).

On the other hand, the word for “temperature” in Korean is called 온도 (ondo). 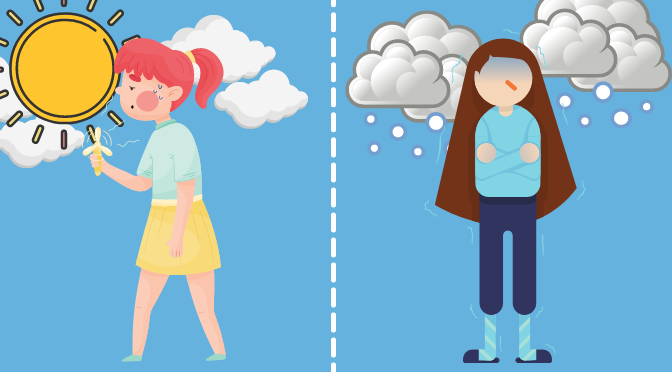 “Dry” in Korean is 건조 (geonjo). This is used to describe a period where the amount of rainfall is low. This is more common in tropical countries where there are only dry and wet seasons.

“Humid” in Korean is 습하다 (seupada). People often experience this temperature in summer.

The word for “rain” in Korean is 비 (bi), while the lighter version of rain, which is “shower” is called 소나기 (sonagi) in Korean.

Also, umbrella in Korean is 우산 (usan). These go hand in hand, so make sure you have your umbrella and waterproof boots with you in the rainy seasons!

Don’t you love it when the wind brings a cool breeze? The word for “wind” in Korean is 바람 (baram), while “air” in Korean which is often associated with it is 공기 (gonggi).

“Thunder” in Korean is 천둥 (cheondung). It’s something we can expect during thunderstorms, and it often appears with lightning.

This is often accompanied by thunder. In Korean, you can say “lightning” as 번개 (beongae).

“Blizzard” in Korean is 눈보라 (nunbora). This is defined to be a powerful snowstorm that happens in rainy seasons.

The word for “cloud” in Korean is 구름 (gureum). Clouds help us easily determine what the weather is like on a certain day.

Congratulations! You have now successfully reached the end of today’s highly informative lesson about the weather and the four seasons in Korean. So be sure to take some time to digest what you’ve just the information as you’re learning Korean. Do you like winter, spring, summer, or autumn? Or perhaps all seasons?

We also have a separate article focused on nature related-terms in Korean to help you expand your vocabulary further.

You might also want to learn Korean words for more lessons to learn along with your newly learned vocabulary about the weather and the four seasons in Korean! This will further help you in learning the Korean language.