How To Say ‘Street’ In Korean

It’s useful to know how to say ‘street’ in Korean.

Whether it’s for the convenience of life in Korea or just for the fun of learning the language, you’ll definitely get some use out of it. For example, you might use it to help you with asking for and giving directions, or for reading maps on your phone.

Read on for example uses and fun ways to remember it! 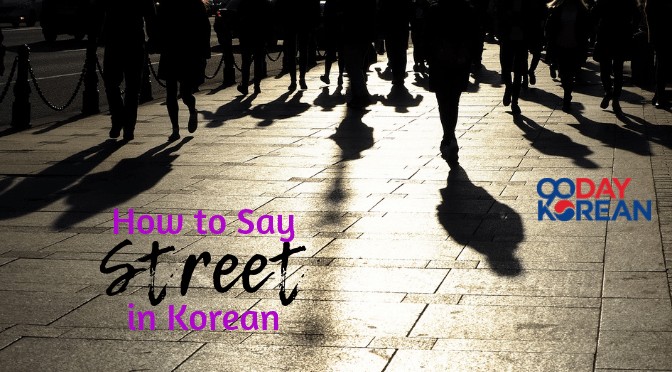 Below, we’ll give you the explanation in both English and Hangeul (the Korean Alphabet). If you can’t read Korean yet, you can get a free guide that will teach you how to read in only 60 minutes here.

The other word is 도로 (doro). This one is usually used in the context of referring to specific street names and so on.

These are great words to add to your list of the most important words to learn first.

Other Words for “Street” in Korean

Another word for street in Korean is 길 (gil). This is not as common to use for street as 거리 (geori). However, its meaning is broader. You can use it to mean not only street, but also road, path, way, and all other similar words. It can also be used when talking about a road in a more metaphorical way.

I have lost my way

One more word for street in Korean that is often used is 길거리 (gilgeori). Unlike 거리 (geori), this one specifically means a walking street.

The first, 거리 (geori), is a pretty simple image. Imagine a goalie standing in the middle of the street preventing you from going forward (it can be the goalie of any sport you prefer).

The other very common term, 길 (gil), is also to create an image from. Just imagine that the paths in Korea are the gills of giant fish! It’s a ridiculous image, but that can actually help with remembering the vocabulary word better.

You try now. What associations can you think of for 도로 (doro | street names)? Share your creations in the comments below!

There are many parking spots on the street.

The bus terminal is just across the street.

Would you like to wander about the streets a bit before going home?

Why is New York’s street map this complicated?

I’m sorry, I might be a little late because the street is crowded.

So now that you know how to say ‘street’ in Korean you should never lose your way. What Korean word would you like to learn next? Let us know in the comments below!