Korean Currency: All About Money, Bills, and Coins in the South 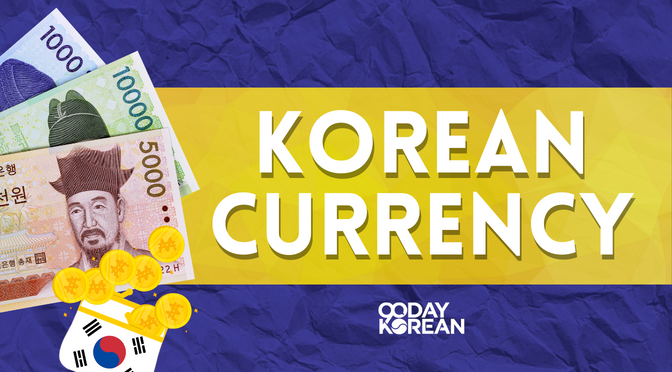 Over the past decades, we’ve seen South Korea evolve into one of the strongest economies in Asia. It’s fascinating to know that the South Korean economy and the Korean currency have improved a lot after what the country has gone through, including what happened during World War II and the Korean War.

In this article, we’ll talk about the history of Korean money, the different Korean bills and coins, and why you should learn about Korean money.

The official name for Korean money is “Won.” This is the name used for both South Korean and North Korea. This became the official currency for both countries after being divided into two.

The name “won” originated from a Hanja character similar to the Chinese Yuan and Japanese Yen.

Although this is where the Korean money’s name came from, their value is quite different. For instance, 1 KRW equals 0.10 Japanese Yen (JPY) and only 0.01 Chinese Yuan (CNY).

What is the currency in Korea?

The official currency of South Korea is the Korean Republic Won or simply the South Korean Won. In Korean, this currency is called 대한민국 원 (daehanminguk won).

The South Korean Won or KRW is the currency of South Korea. This currency uses the symbol “₩.”

History of the Korean Won

Fast forward to the present day, Korean currency makes use of Korean bills and Korean coins. In them are printed images of people who have made significant contributions to South Korea.

It’s impressive that when learning more about the South Korean Won, you can’t help but also learn about Korean history.

How does Korean Money work?

As for the  South Korean won coin denominations, there are currently four that are in circulation. These are the 10-won coin, 50-won coin, 100-won coin, and the 500-won coin.

Let’s move on to talking about the Korean Bills and Coins, what they look like, and the exciting stories behind them. Let the fun facts begin! 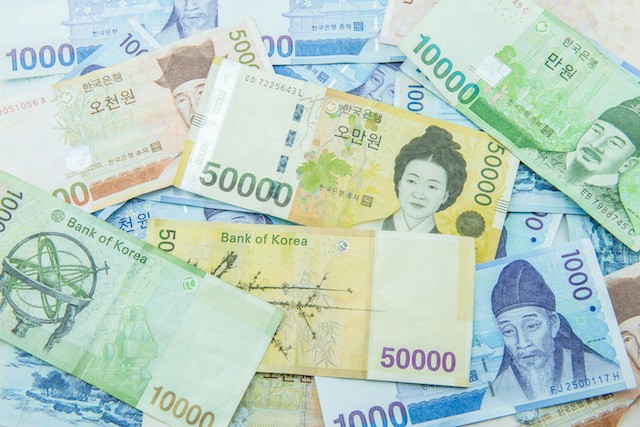 Many of the names here are written in Hangeul, the Korean Alphabet. If you can’t read Korean characters yet, you can learn them for free in about one hour here.

Note: You can use Google currency converter for more accurate conversions for updated exchange rates.

Yi Hwang was a famous Confucian scholar from the Joseon Dynasty (That’s the 500-year Confucian dynasty in Korea!) who was big into calligraphy and poetry.

If you’re wondering who Toegye is, great question! That was his pen name. Yi Hwang was a busy guy. 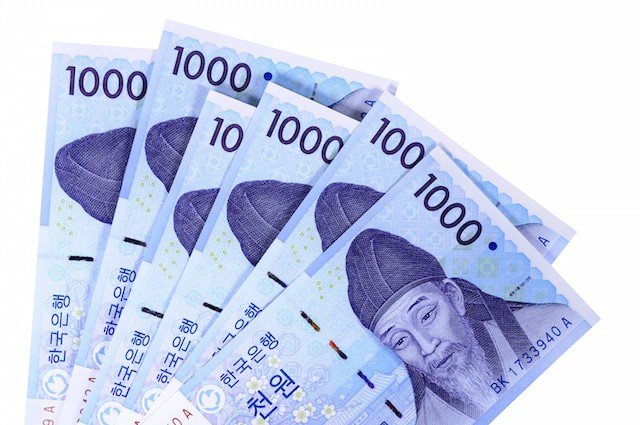 The back of the ₩1,000 bill is the 계상정거도 Gyesangjeonggeodo. In addition to being an impressively long name for a painting, the backside of the 1,000 won bill also represents a painting of Yi Hwang in Dosan Seowon (area of Korea).

If you’ve ever visited present-day Andong in Korea, then you have been to Dosan Seowon! 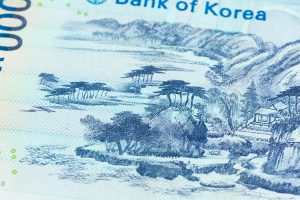 Like Yi Hwang, Yi I (pronounced “yee-ee”) was also a mover and a shaker back in the 1500s. He attained fame as a Confucian scholar and flew under the radar with his pen name Yulgok.

The backside is another famous painting, 초충도 Chochungdo. This painting was made by Shin Saimdang (Yi I’s mother). It’s called “Insects and Plants.” 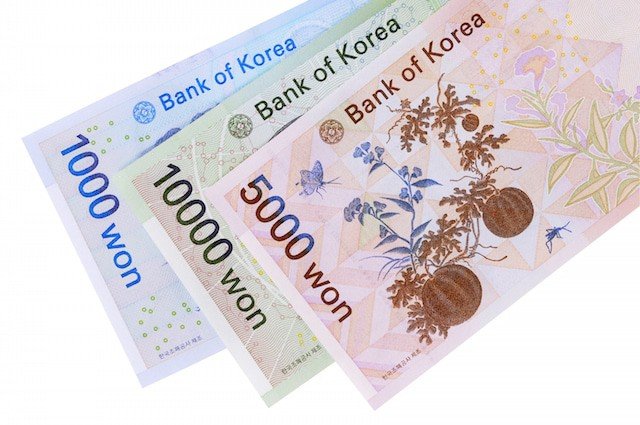 If you haven’t heard of this 4th king of the Joseon Dynasty, then consider this the first of many times that you will! He is the one responsible for introducing Hangeul into Korean society. Hangeul is essential to Korean society; it even has its own holiday!

The back of the 10,000 won bill is the 혼천시계 Honcheonsigye.

Since “sigye” means “clock” in Korean, we can call the picture on the back of this note the “Hocheon Clock.” 혼천시계 (honcheonsigye) is an astronomical clock that was made in 1669 and is still in existence today. If you’re ever sitting in your house and wondering what the position of the universe is at any given time, you’ll want to stop by Korea University to consult with the Hocehon Clock in person! 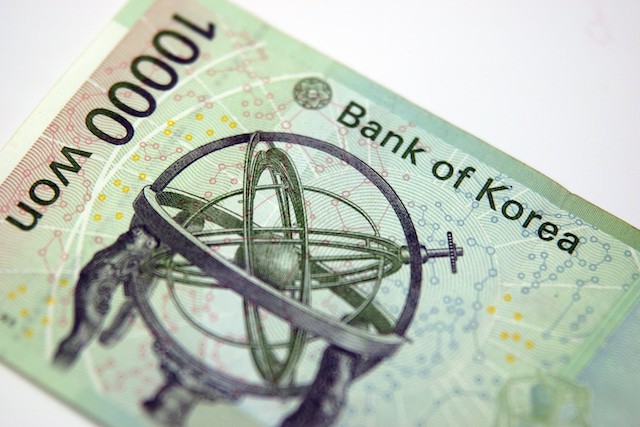 Try saying that name four times fast! Shin Saimdang was the mother of Yi I, as well as a writer, artist, calligraphist, and poet. Her artwork captured beautiful and delicate images of insects, flowers, fish, and landscapes. People liked her because she was a model of Confucian ideals.

At the back of the bill is the 월매도 Wolmaedo. Fairly simple; this is a painting of bamboo and a plum tree. 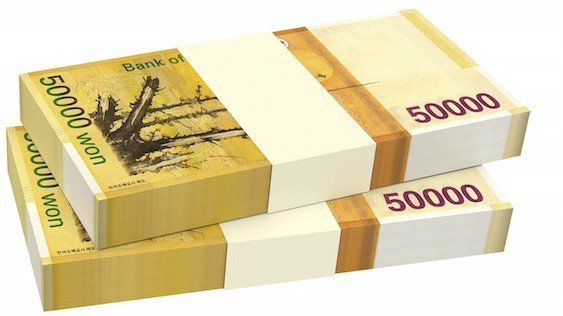 There you have it, the big four in Korean currency.

Now, let’s move on to the coins!

Crack open your piggy banks; we’re about to give you the need-to-know information for each of those famous coins you often see. Your trips to the vending machine will take on a new dimension of fun!

The obverse side of the ₩10 coin shows the 다보탑 (Dabotap) Pagoda, a Buddhist monument in Gyeongju, South Korea. The reverse side displays the standard information found in all coins: the value of the currency, the date, and the issuer (한국은행 | Bank of Korea).

The US dollar exchange rate of this Korean coin (KRW) is roughly around $0.0070.

The obverse side of the ₩50 coin features a stalk of rice, Korea’s favorite food. The reverse side shows the value of the coin, the date, and the issuer (한국은행 | Bank of Korea).

The US dollar exchange rate of this Korean coin (KRW) is roughly around $0.035.

The principal design of the ₩100 coin is an image of Admiral Yi Sun-sin (1545-1598), a celebrated navy admiral and national hero in Korea. The reverse side displays the value of the coin, the date, and the issuer (한국은행 | Bank of Korea). 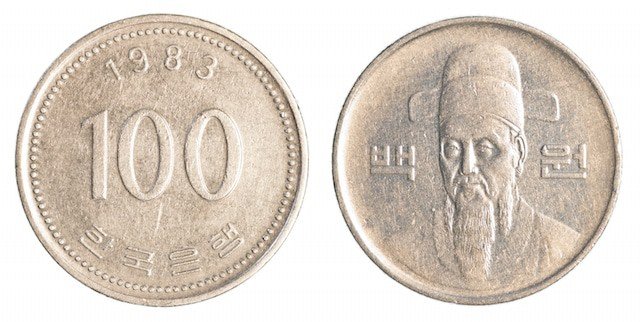 The US dollar exchange rate of this Korean coin (KRW) is roughly around $0.070.

The ₩500 coin’s principal design is the graceful Red-Crowned Crane flying through the sky. The reverse side displays the value of the coin, the date, and the issuer (한국은행 | Bank of Korea).

The US dollar exchange rate of this Korean coin is roughly around $0.35.

How to Convert Korean Won to USD

To convert Korean won to USD, USD to Korean won, or any other currency, you can check your local bank. You can also check the exchange rates using converters like this one.

If you have seen the Korean series Squid Game, you might be curious how much the cash prize is when converted to USD.

Why do I need to learn Korean money?

If you’re planning to visit or live in Korea or do business with Koreans, it’s valuable to know about Korean money.

Getting familiar with the different Korean money (Korean bills and Korean coins) will help ease your life with anything related to spending money when you’re in South Korea.

Want to learn how to count money? We’ll teach you how! You can check out our article on Korean Numbers and start counting in Korean today.

If you want a detailed lesson on the Korean language, including Korean numbers, we’ve created the 90 Day Korean Membership Program. It’s a proven method to improve your Korean language skills quickly. You’ll be able to have a 3-minute conversation in Korean in the first 90 days if you follow our structured program.

So there you have it! Hopefully, you now know a bit more about Korean money.

Which Korean bill or coin is your favorite? Please feel free to leave a comment below!

46 replies to "Korean Currency: All About Money, Bills, and Coins in the South"