How to Say “Stupid” in Korean

In this lesson, we will look at how to say “stupid” in Korean. Hopefully, you won’t need to say this too often, but it is useful to know anyway!

After all, everyone feels a bit stupid sometimes. Or, maybe you notice something stupid and want to express your feelings. 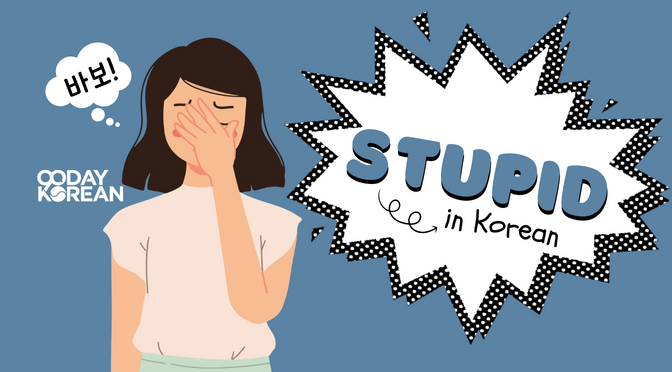 There are two main ways to say “stupid” in Korean. One is based on a noun, and the other on an adjective.

We will tackle both in this lesson. Let’s get to it!

“To be stupid” in Korean

The adjective for “stupid” is 멍청하다 (meongcheonghada). This is used when making sentences such as “that is really stupid.”

How to say “stupid” in Korean

There are different ways to say “stupid” in the Korean language, depending on who you are speaking with.

Below, we’ve explained them in detail and categorized them into their formal, standard, and informal forms.

You will unlikely want to use these words in formal situations such as job interviews or presentations. However, if you do, you can use the below forms of these words. 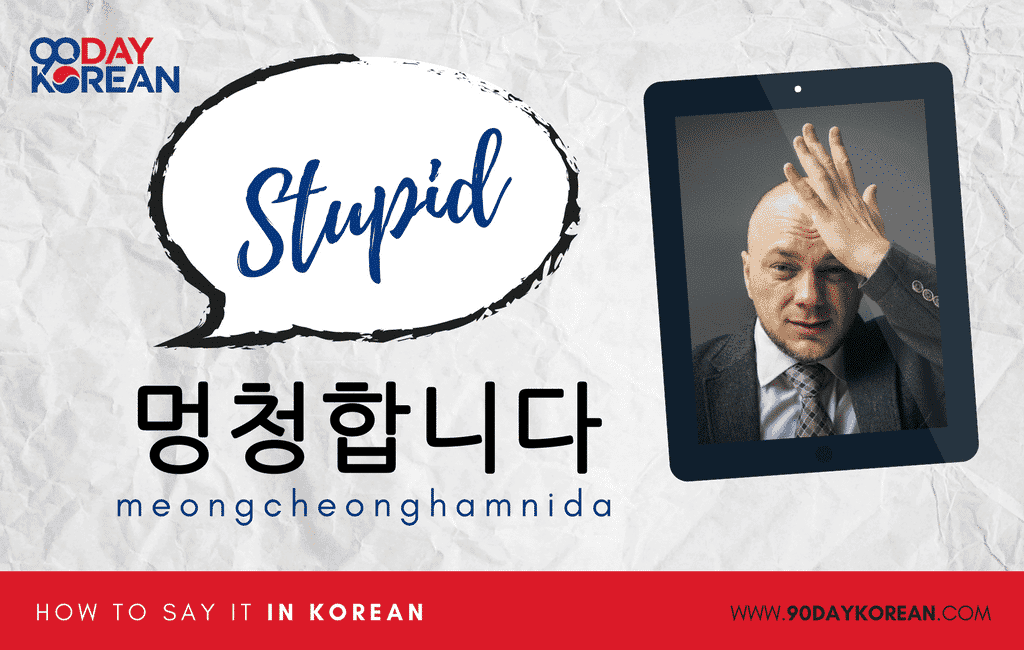 In contrast to his smart brother, he is stupid.

I don’t want to look stupid.

You can use these expressions when talking to people who are older or not particularly close to you. Remember that it isn’t nice to call somebody stupid so be careful when using these words!

Out of the two friends, one is very stupid. 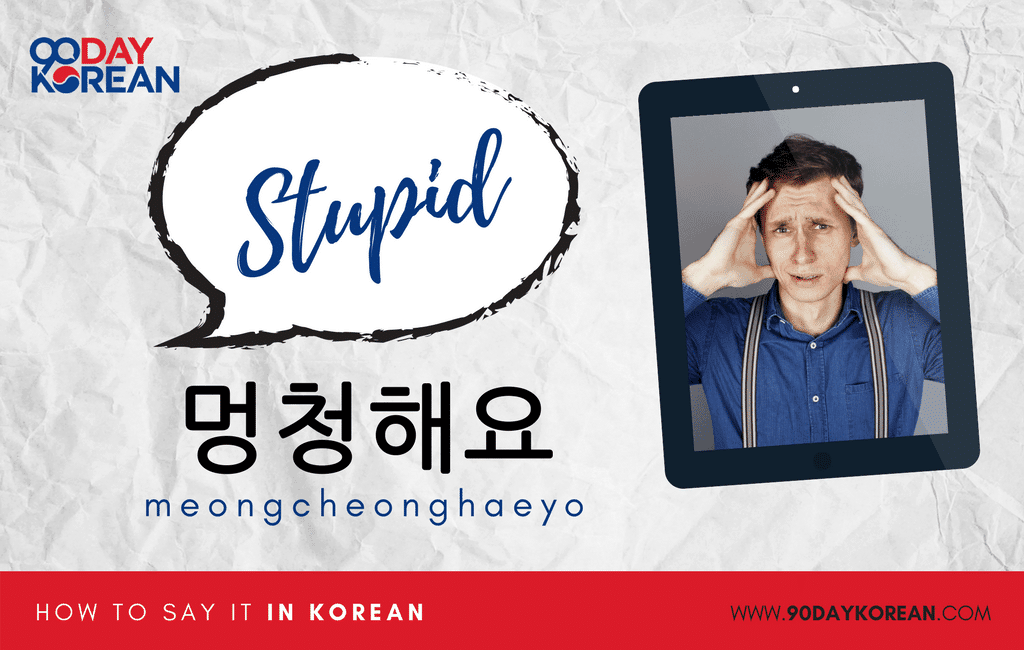 A man is stupid to trust any woman. 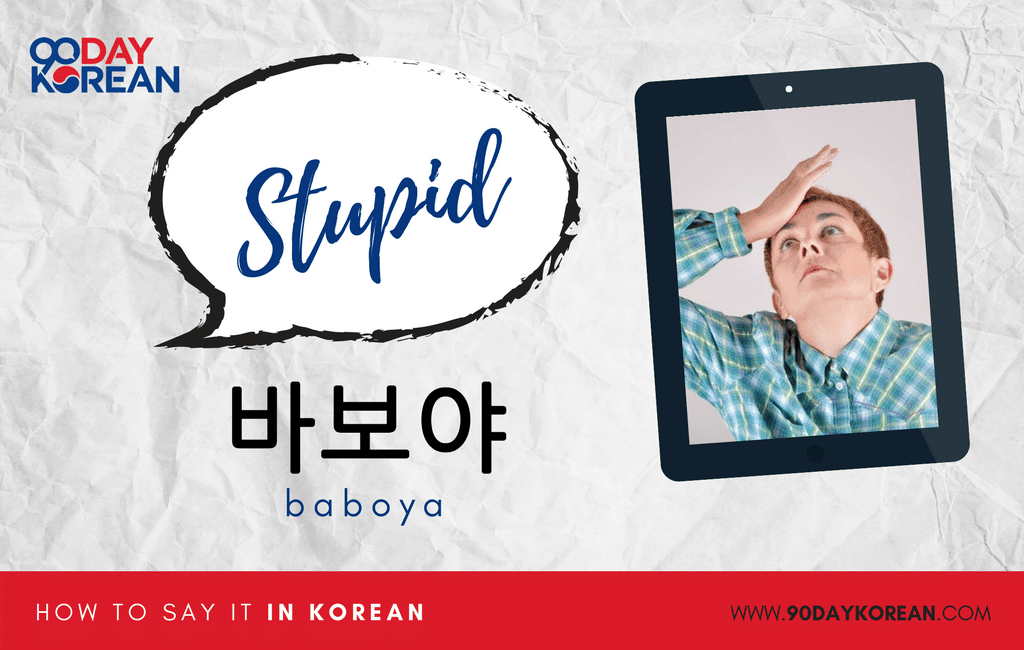 Other ways to use “stupid” in Korean

Below are other ways to say “stupid” in the Korean language. You can change 멍청하다 (meongcheonghada) to 멍청한 (meongcheonghan) as shown in the examples below.

Another word that is often used in this situation is the noun 바보 (babo).

You can use this word if you want to call somebody stupid.

How could I have been so stupid?

So, how about the opposite of “stupid?” If you want to describe someone as “clever” or “smart” in Korean instead, you can use 똑똑하다 (ttokttokada) or  영리하다 (yeongnihada).

He is a very smart kid.

I’m smarter than you.

He’s clever and won’t be fooled

There are several other words that can be used in place of “stupid,” and we’ll show you how they are used in Korean. Just a friendly reminder, these terms are often regarded as negative and can be offensive.

The Korean word for “idiot” is 바보 (babo).

The word for “moron” in Korean that is commonly used is 바보 천치 (babo cheonchi).

He is a moron.

Although we have introduced specific Korean words for each word above, these terms can be used interchangeably. Like in the example below, the word 바보 (babo) is used to mean “fool.”

I was such a fool at the time.

The words in this article have been romanized in order to make this article more accessible. But if you really want to learn Korean, the first step is to learn the Korean alphabet, which is called Hangul. It is easy to learn and will help you improve your understanding of Korean in many ways, saving you time and effort later.

For more phrases that you can use every day, read this article. If you want to take your language learning to the next level, why not sign up for our full Korean course?

Now that you know how to say ‘stupid’ in Korean, you can hopefully express yourself more. Let us know when you feel stupid and what you can do to help others who feel stupid. By knowing more Korean, we can all help each other become more confident!

4 replies to "How to Say “Stupid” in Korean"