Telling Time in Korean – How to say clock hours & minutes

Want to learn all about telling time in Korean? You came to the right place! No Korean learning plan is complete without knowing the time.

We’ll give you the essential Korean vocabulary and phrases you need for telling the time in your everyday life. In this way, you’ll never be late for your next appointment. 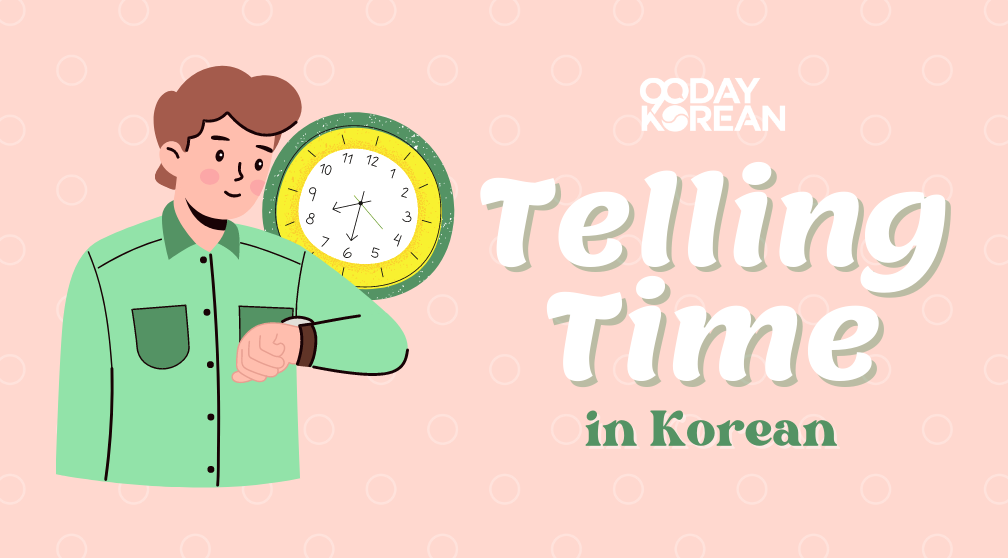 Much of this article will use the Hangeul (한글), so you can reference the romanization if you can’t read it yet. But we highly recommend you learn the alphabet ASAP. You can get a guide here.

Well then, let’s mind the hour and start!

Here is a free PDF guide that you can download and take with you:

Getting started with numbers

To tell the time in Korean, you need to know a bit about numbers in Korean. There are two number systems used, and both are used when telling the time in South Korea. We have a great blog post about Korean numbers, so study that if you’re interested.

For now, you can reference this chart:

We cover this more in-depth in our lesson on Korean numbers. So with that out of the way, let’s get to telling the time in South Korea!

Can’t read Korean yet? Click here to learn for free in about 60 minutes!

When telling the hour in South Korea, you use the word 시 (si) or 시간 (sigan). Remember you use a number from the 하나, 둘, 셋 (hana, dul, set) number system when using hours.

시 (si) is used specifically for telling time (4 o’clock = 네시 | nesi), whereas 시간 (sigan) is for an amount of time (4 hours = 네 시간 | ne sigan ) instead of telling it. Look at these time examples.

If you are telling the minutes, then you use the word 분 (bun). You should use a number from the 일 (il), 이 (i), 삼 (sam) number system when using minutes.

Unlike hours, 분 (bun) is used to tell the time in Korean and indicate an amount. Here are some examples of what the time in minutes would look like.

How to Tell Time in Korean

Now that we’ve covered our Korean numbers and know about telling hours (시 | si) and telling minutes (분 | bun), we can put them all together. A few things to know before diving further into the time of South Korea, though. Korean also has a word for “half past” (i.e., 4:30), which is 반 (ban). This means “half” in Korean. It makes things a bit simpler when reading the time. Look at this time example.

It’s also ok to say 네시 삼십분 (naesi samsipbun), but 네시 반 (naesi ban) is a bit easier for telling the time, wouldn’t you say? Note that although there is a word for “half past” when telling the time, there aren’t equivalents for “quarter past” or “quarter till.” You’ll just have to read it out in time.

Also, these Korean words usually have spaces in between them. However, with hours and minutes in telling time, there’s no space. So while you may see 2 o’clock written as 두시 (dusi) and 두 시 (du si), the first one, 두시 (dusi), is the proper form for Korean time. But this isn’t a strict rule for the time in South Korea.

So with that out of the way, we can start practicing!

You can practice this a bit yourself, and there’s a bit more we need to know about telling the time in Korean before we can say we’ve mastered this, though.

You may be aware of the two different ways of telling the time, the 12hr clock (AM, PM) and the 24hr clock usually used by the military (HH:mm). South Korea uses both these systems for telling the time in daily life, but in different situations.

In most situations, you’ll hear the 12hr clock used in South Korea. However, you may encounter the 24hr clock when you see the time written in scheduling, like in timetables at the airport or with TV time schedules. In the 24hr form, it’s the number+시 (si).

Notice a difference here? When telling the time in the 24hr form, it’s read using only the China system numbers or the Sino-Korean numbers. But while those in the Korean military or officials would read the time as above, you’ll very rarely encounter it spoken this way in South Korea.

In almost all other situations, even where it’s written in the 24hr form, people would still say the time in the 12hr form. So most people would read the above time as 두시 삼십오분 (dusi samsipobun), and we recommend you do it as well.

So, how do we distinguish between AM and PM? We’ll get to that now.

Telling AM and PM

In South Korea, the vocabulary for AM is 오전 (ojeon). You would use this for telling the time in the morning hours before noon.

The vocabulary for PM is 오후 (ohu). You would use this for telling time in South Korea in the afternoon and evening hours afternoon. Note that 오후 (ohu) is also a word for “afternoon.”

However, unlike in most places, these are placed at the beginning instead of at the end. Here are some time examples.

You may, on occasion, see AM and PM put at the end of the time. Or if someone is talking about the morning, 아침 (achim), or evening, 저녁 (jeonyeok), then AM and PM would be omitted entirely. For the most part, though, you’ll want to say them first when telling the time out loud.

If that’s all clear, let’s recap on our time vocabulary and add some phrases you can start using for telling the time in the conversation!

What time is it in South Korea?

South Korea is ahead of New York for 13 hours, following the (GMT-4) time zone. If it’s 8 pm Thursday in New York (EST), then the time in South Korea (KST) is 9 am on Friday.

The time in South Korea and Japan are the same since both countries have the same time zones (GMT + 9 hours). However, Japan’s time zone is Japan Standard Time (JST).

The time in Seoul, South Korea, is ahead of London, with a time difference of 8 hours. For example, if it’s 8 am in London, which follows the British Standard Time (BST) time zone, it’s already 4 pm in South Korea (KST). Another example is if it’s 6 am (KST) in South Korea on a Wednesday, then it’s still 10 pm (BST) in London on a Tuesday.

Having a time difference of only one hour from the Philippines, it’s quite easy to determine the Korea Standard Time in South Korea compared to Manila.

The time in Seoul, South Korea, is 7 hours ahead of France. They observe 12 different time zones depending on the Daylight Saving Time.

Similar to Manila, the time in Seoul, South Korea, is also 1 hour ahead of  Beijing, China, which follows the China Standard Time (CST) time zone. The time difference will not be difficult to remember.

Here are some useful vocabulary words when talking about time in South Korea.

Dawn is the time of the day when the sunlight starts to appear, and it usually symbolizes a new start. This English word means 새벽 (saebyeok) in Korean. If you’re a morning person, you most likely are already up by dawn.

What time is dusk? In definition, dusk happens just before nighttime when the sun has set, but it is not yet completely dark. In Korean, you can say it as 황혼 (hwanghon) or 땅거미 (ttangeomi); however, 해질녘 (haejilnyeok) is a more common term used for dusk.

Midnight signals the transition from one day to the next, specifically at 12 o’clock at night. In Korean, it is usually said as 자정 (jajeong) or 밤 12(열두)시 (bam yeoldusi).

Now that you’ve learned different vocabulary on time in Korean, here’s how you can use them in sentences.

“What time is it” in Korean

When learning Korean sentences related to time, this is the common sentence that you might encounter. Here’s how you can say this sentence in the standard form.

Other sentences related to time in Korean

Here we’ll give you some common Korean phrases at different levels of politeness so you can always be ready.

Below are formal sentences in Korean. These are often used in the news or public announcements.

The next bus to Seoul will be 15 minutes late and will now depart at 8:45 am.

You can use these sentences about time in South Korea in your everyday life for every situation, and they’re considered polite.

What time should we meet?

In South Korea, this speaking style is used with Korean friends, family, or others you’re close with.

What time is the movie?

Now you know all about South Korea time and telling the time in Korean!

Here are more articles that cover related lessons on the date and time in Korea:

That’s a lot of information! If you have any questions about the content of this lesson, feel free to leave a comment below. Don’t go claiming the mantle of Time Lord just yet, and there’s still a lot more about the Korean language to master.

But now, you must also know the time difference you have with South Korea with the time zones shown above. Check out our other posts, all geared to help you learn essential Korean phrases! We also have an online course that can help you improve your Korean language skills.