In this lesson, we’ll show you how to say “thank you” in Korean. It is one of the most important things to know when learning to speak the language.

This video shows the most common ways of saying thank you.

How do you say “Thank you” in Korean?

When people first start to learn Korean, they are often surprised that there are more ways to say “thank you” than there are in English. The key is learning which of the phrases should be used with which people! Korean culture gives importance to hierarchy and respect which is evident in their gestures and their language. This is why there are different ways of saying thank you and other Korean phrases. Koreans have different ways of speaking with each other depending on the age or position someone holds. Their way of speaking can vary from formal to casual language. Not to worry, if you follow the Korean etiquette rules, you are sure not to offend anybody.

Below, we will learn all of the various ways to say “thank you” in Korean, and the people they should be used with. 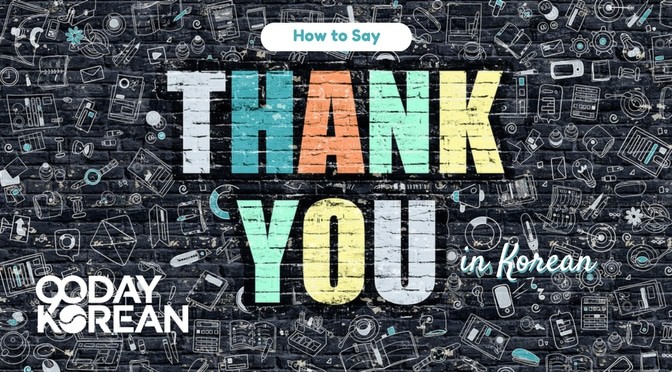 We also have a free “Thank you in Korean” PDF guide so you can take the phrases with you on the go. Check it out below:

Get How to Say Thank You in Korean Free PDF

Are we ready to get started on how to say “thank you” in Korean? Let’s get to it!

How to Say “Thank You” in Korean Formal

There are several levels of formality in the Korean language. These levels are reflected in Korean culture. We’re going to break it down into 3 simple forms for you. For Korean phrases in general, we recommend using the standard “thanks” form since it’s the most versatile.

However, for “thank you” in Korean, it’s best to learn the formal language version first! 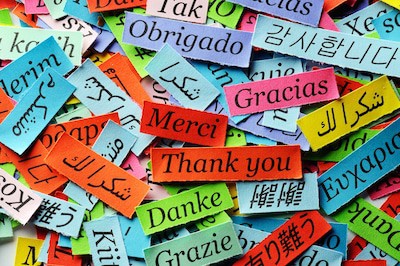 Most of the time, you will only need to use one of the two ways of saying thank you in Korean below.

This is the formal language version of “thank you”. It comes from the Korean verb 감사하다 (gamsahada) which means “to thank.” 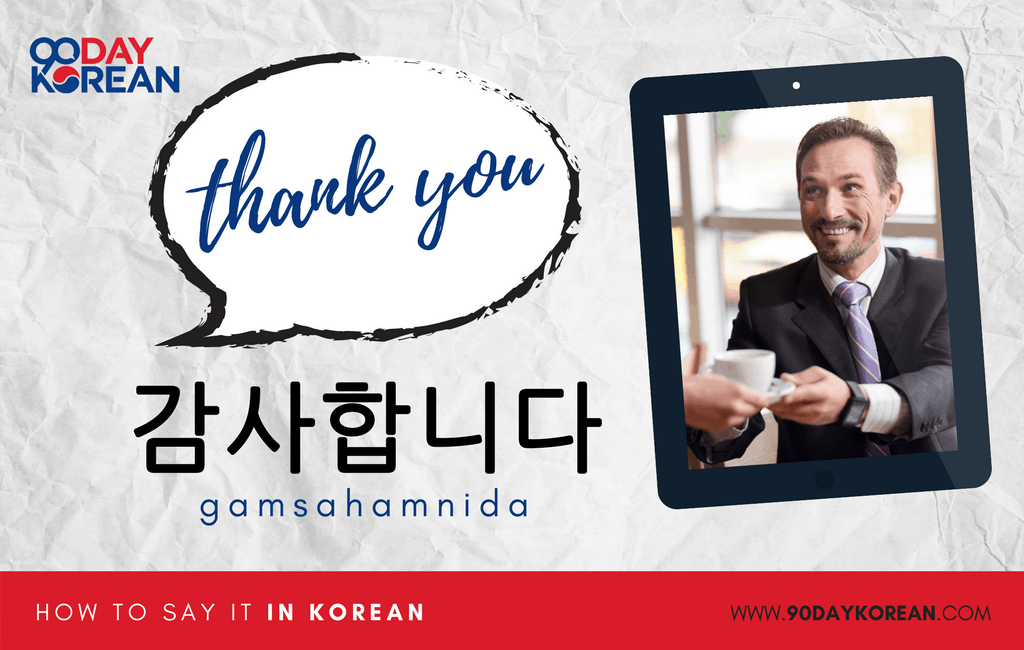 감사합니다 (gam sa ham nida) is one of the most common ways of saying “thank you” in Korean. It uses formal and polite language, so can be used with strangers and people older than you. You can use this thanks for everyday life in Korea.

Thank you very much for your time.

Thank you for helping me.

Thank you for your concern.

The word 감사 (gamsa) is a noun that means “gratitude” or “appreciation” in the Korean language.  The 합니다 (hamnida) part means “to do”. Put them together, and you get 감사합니다 (gamsahamnida | to do thanks).

You can use this phrase to express “thank you” in Korean in a restaurant, convenience store, or taxi. It is usually said quite quickly, so the pronunciation might sometimes sound to you like 감삼니다 (gam sam ni da). But they are actually saying 감사합니다 (gam sa ham ni da).

The Korean phrase 고맙습니다 (go map seum ni da) is one of the most common ways to say thank you in Korean. It can be used in the same situations as 감사합니다 (gam sa ham ni da).

This “thank you” in Korean would be considered polite. That means you can use it with anyone: friends, family, coworkers, etc. 고맙습니다 (go map seum ni da) is a pure Korean word, so you’ll often hear newscasters use this polite version. It doesn’t matter a whole lot which one you choose, it’s better to be familiar with both versions of “thank you” in Korean.

How to Say THANK YOU in Korean | 90 Day Korean

This expression comes from the Korean descriptive verb 고맙다 (gomapda) meaning “to be thankful or grateful.”

Below are some example sentences using “thank you” in Korean. You can use 감사합니다 (gamsahamnida) in place of 고맙습니다 (gomapseumnida). It’s still polite and the meaning would be the same.

Thank you for saying so.

Thank you for the message.

How to Say “Thank You” in Korean Standard

If you are close to somebody, and they’re close in age to you, then you can say 고마워요 (gomawoyo) to express your thanks to them using standard language. This phrase 고맙습니다 (gomapseumnida) comes from 고맙다 (gomapda) which means “to give thanks”. Therefore, this version of “thank you” in Korean is the same as 고맙습니다 (gomapseumnida). 고마워요 (gomawoyo) is still polite, but it’s conjugated differently so it’s a bit less formal.

Since 고마워요 (gomawoyo) is a slightly less formal version of 고맙습니다 (gomapseumnida), you might be wondering if the same is possible for 감사합니다 (gamsahamnida). It is also possible to say 감사해요 (gamsahaeyo) at this level of politeness, but very few people say this. You can say this form of thank of you in Korean, however it sounds a bit strange. 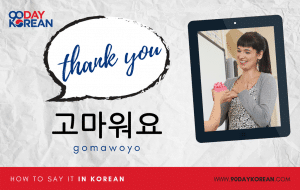 99% of the time you will be speaking in the polite “-요” form of Korean rather than the formal, stuffy “-입니다 (-imnida)” form of Korean. However, you should generally still use the polite words 감사합니다 (gamsahamnida) or 고맙습니다 (gomapseumnida) when saying “thank you” in Korean. The only time that you should break this rule of saying thanks is when you are talking to people who you are close to, such as your friends.

Thank you so much.

Thank you for letting me know.

How to Say “Thank You” in Korean Informal

This version of “thank you” in Korean is used in situations where less polite and formal language is appropriate. You might say 고마워 (gomawo) to somebody you are very close to who is the same age or younger than you. This is a good way to thank people who are close friends or siblings. 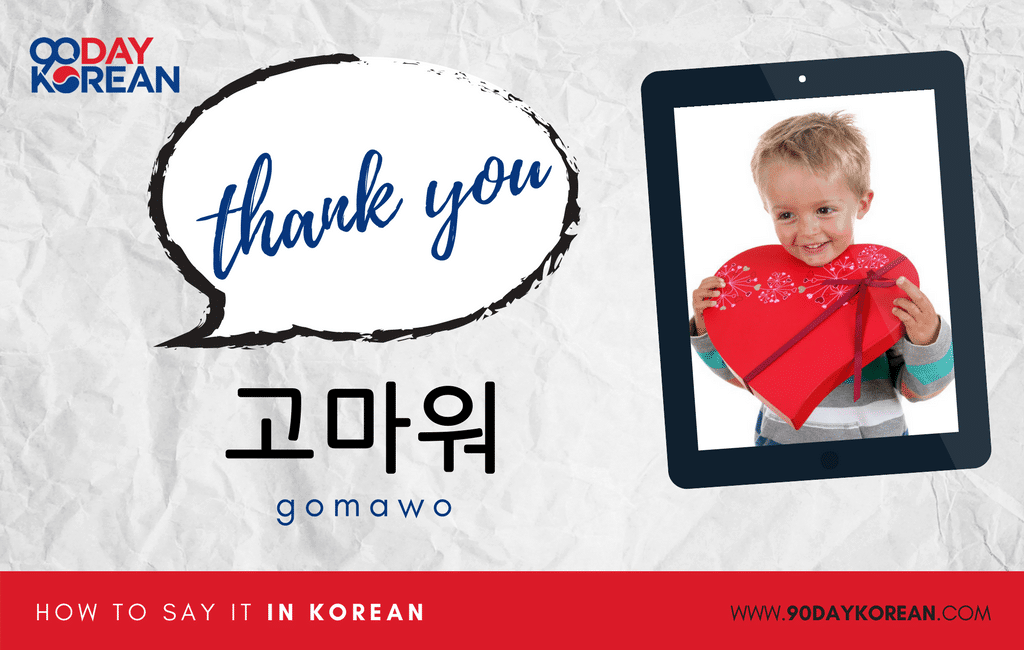 This informal version of showing thanks is less polite than the other versions of thank you, so it is something that is usually used with close friends or young children.

Learning this form of “thank you” phrase is better than learning 감사해 (gamsahae) because it is not used often. If you say 감사해 (gamsahae), people will know what you mean. However, 고마워 (gomawo) is a much more natural way of saying “thank you” in Korean when speaking informally.

Since this is an informal and less polite way of saying “thank you” in Korean, it’s similar to saying “thanks” in English.

Thank you for buying me a present.

How to write “thank you” in Korean

You can write this polite phrase as 고맙습니다 (gomapseumnida). This is the one that’s most commonly used when learning the language.

How to spell “thank you” in Korean

You can spell the word as five separate syllables: 고-맙-습-니-다. You don’t need spaces between the syllables. It should look like this: 고맙습니다.

If you’re going to spell it using romanized letters, you can write gomapseumnida. It’s pronounced similar to go-map-seum-ni-da. There are no spaces between the letters.

How to say “Thank you very much” in Korean

How to say “Thank you for the food” in Korean

If someone treated you to a meal and you want to express your gratitude, you could say 잘 먹었습니다 (jal meogeotseumnida). It’s a formal way of saying “thank you for the food” or “thank you for the meal”. It translates to “I ate well.”

How to Say “No, Thank You” in Korean

How do you say thank you in Korean slang?

You can say 땡큐 (ttaengkyu), which sounds similar to “Thank you” in English. If you’re texting, you can write ㄱㅅ, which is shorthand for 감사합니다 (gamsahamnida).

More Ways to Say “Thank You” in Korean

You’re very likely to hear this formal language version of thank you in Korean during announcements, such as an announcement on the subway.  We already learned 감사합니다 (gamsahamnida) earlier, which is a formal version of “thank you”.

The word 대단히 (daedanhi) means “very much” in English. If you put them together, it means “thank you very much”. You can use this phrase in formal situations, such as when you’re giving a speech or presentation.

The word 진심 (jinsim) here means “sincerely” in English. If you want to up your “thank you” game in the language, then this is a phrase you will want to add to your repertoire.

The 정말 (jeongmal) part means “really” or “truly”, so it’s like saying “thank you truly” in English. You can use this “thank you” in Korean version with 감사합니다 or 고맙습니다 (gamsahamnida or gomapseumnida) as well. Use this version when you want to express a sincere and heartfelt thanks.

This thank you in Korean phrase means “thank you for your consideration”.  It uses the word 생각 (saenggak | thought) and the verb 주다 (juda | to give) before 감사합니다 (gamsahamnida). Not only is this an expression that you can use in many situations, but it’s also an excellent way to learn some new Korean grammar and sentence structures.

This means “thank you for joining us” in English. 함께 (hamkke | together) means “together”. 주다 (juda | to give) is used along with 감사합니다 (gamsahamnida) at the end.

This expression means “thank you for the gift”. The word before 감사합니다 (gamsahamnida) is 선물 (seonmul), which means “gift”.

This means “thank you for your interest” in English. It uses the two verbs 주다 (juda | to give) and 가지다 (gajida | to have or carry), along with 관심 (gwansim | interest). You can also use 감사합니다 (gamsahamnida) in place of 고맙습니다 (gomapseumnida).

This means “thanks for calling back” in English. You can use this expression on the phone, but make sure you know the correct way to say hello on the telephone. It is different than the phrases you’d use to say hello in person.

You can say this version of “thank you” in Korean to express “thank you for coming.” You might use this phrase to thank a friend for coming to a get together, or thank a colleague for attending an event you organized.

This means “I don’t know how to thank you” in English. It’s a formal way of saying thank you, and ends in an exclamation.

Responses to “Thank You” in Korean

There are a variety of ways that you can respond to someone when they say “thank you” to you. Learning them will be useful so you can give a polite reply. Let’s go through a few.

This is a way of saying “you’re welcome”. You should stretch it out in an elongated way to make it extra kind. The phrase comes from the word “아니다 (anida)”, which means “no”. It’s similar to saying “it was nothing, don’t mention it” in English.

This is the equivalent of saying “don’t mention it”. If someone says “thank you”, you can respond with 천만에요 (cheonmaneyo).

This is another way of saying “don’t mention it”. You can respond to a “thank you” in a more formal way by saying 별말씀을요 (byeolmalsseumeullyo).

If you’d like a simple way of learning these, then follow these basic rules when deciding how to say “thank you” in Korean:

When in doubt, remember what Mom always says—it is better to be polite than impolite! Therefore, if you only learn one way to say “thank you” in Korean, then learn 감사합니다 (gamsahamnida).

If you’re curious about the Korean language, here’s a great writeup where you can learn more about it.

Now it’s your turn. Get out there and give these expressions a try and put a smile on the faces of those you run into. Let us know in the comments below how you made use of the word “thank you” in Korean conversations.

Want more Korean phrases? Go to our Korean Phrases Page for a complete list!
Get How to Say Thank You in Korean Free PDF