Korean Keyboard: Learn how to type on your phone, tablet, & computer

You may know how to type in English, but learning the Korean keyboard is one of the best things you can do to learn the language. It’s also a lot of fun!

Once you achieve mastery in the art of typing in Korean, you can chat with friends online, comment on websites, look up words in the dictionary, search Naver (a must have app for anyone living in Korea) — and the list goes on!

We’ll show you everything you need to know about Korean typing. 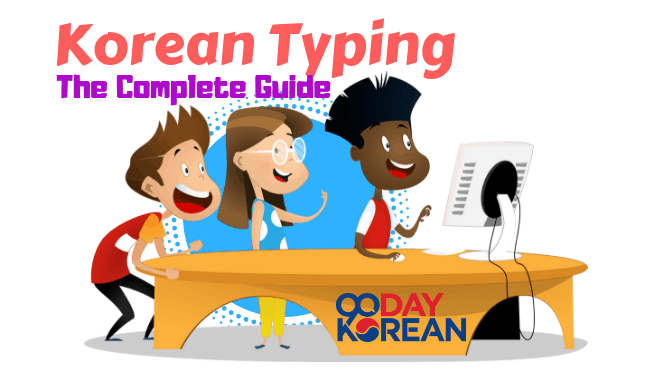 Do you want a downloadable guide? We have a free PDF resource for you here:

Today we will progress through five steps in our journey toward becoming masters of typing on the Korean keyboard. If you haven’t yet learned the Korean characters, we recommend you do so before learning the skill of typing Korean. It’s fast and easy, so no reason not to start! So now we can install the 2-set Korean keyboard layout on your computer. It’s available on both Windows and Mac and we’ll go over how to install it. Before that, we’ll need to decide on the Korean keyboard format you want to use.

Choose the Korean Keyboard that Works for You Before you install the Korean keyboard software on your computer (or at least before you start typing with confidence), you’ll need to make a decision.

Most English speakers probably didn’t buy their computers in Korea, so chances are the Korean characters are not written on the keyboard.

But not to worry. Practice helps and soon you’ll have a feel for where the keys are located on the keyboard. You’ll be able to type without looking in no time!

But in the beginning, it helps to have some assistance. It’s like training wheels on a bicycle — you can build up your confidence and get used to things, and then when you’re ready, take them off!

If you want, you can make your own stickers to stick on your keyboard or you can purchase stickers from places like Amazon.

Depending on your computer, you could also opt for a Korean keyboard cover (like this one from Amazon). This makes it much easier to switch back and forth when you’re not practicing Korean. Just make sure you find one that matches your computer keyboard.

When going the memorization route, we recommend a mnemonic! More on that technique later.

Regardless of how you choose to start (using stickers, a keyboard cover, or just memorizing the keyboard layout by heart), we’ll need to install the keyboard.

Installing the Korean Keyboard on your Computer

To get started, you’ll need to install the Korean keyboard on your computer. 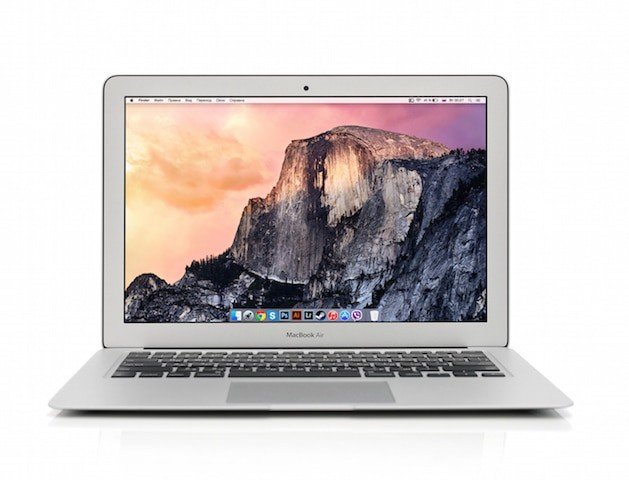 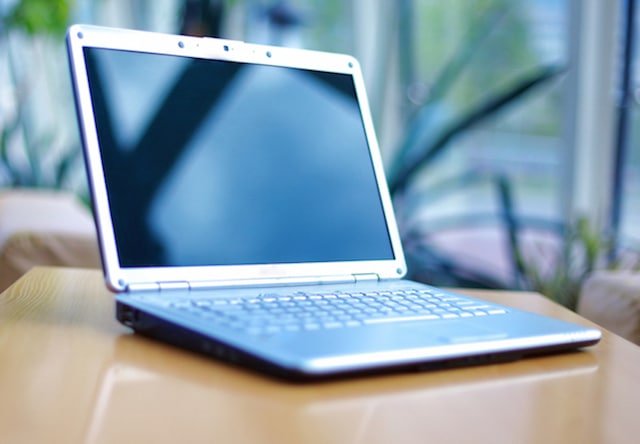 2. Change keyboard or other input methods

If the above methods don’t work for you, let us know in the comments below and we’ll do our best to help!

Once the keyboard software is installed, you can use the built-in shortcuts for Windows or Mac to switch to the Korean keyboard.

Now that we have all the proper tools in place, let’s learn the Korean keyboard layout.

With the 2-set Korean Keyboard installed, let’s orient ourselves with the letters. On the left are the consonants. Notice how all of the aspirated consonants are on the bottom row! 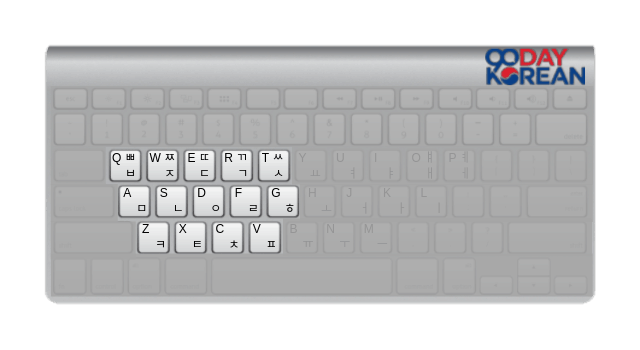 Conveniently, all the vowels are on the right! See them here in blue: 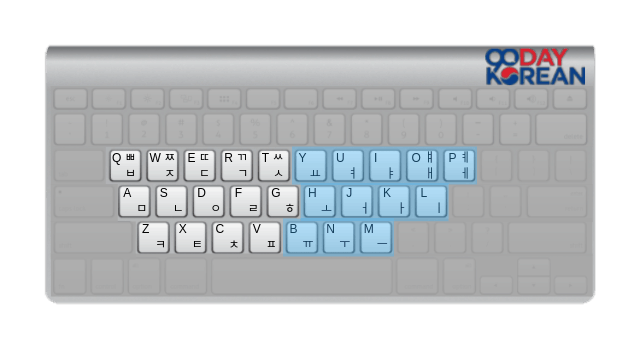 But where are the missing vowels and the double consonants you may ask? You’ve just got to believe, young one, and they will appear (or — just hold shift)! See what happens when you hold down the shift key. Cool! New characters!

And in order to type Korean vowel letters on a Korean keyboard, we need to be familiar with the Korean alphabet.

In the 90 Day Korean Inner Circle, there is a detailed lesson on Character Fundamentals. For now, just know that a vowel always follows a consonant in any syllable!

In need of a visual? Take a look for yourself. 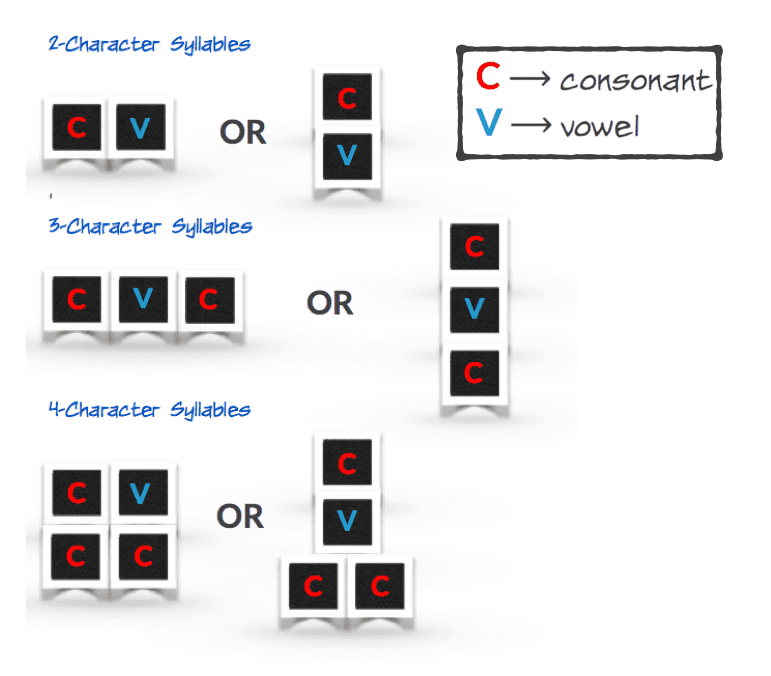 So, to create a syllable with a Korean keyboard, we need to type a minimum of two characters —  a consonant and then a vowel. That’s easy, right? Black plus blue. This creates a complete ‘letter’ in Korean.

Becoming a good builder on a Korean keyboard is easy because the keyboard software does a lot of the work for us! It knows the character fundamentals shown above, so it ends syllables when they are complete and starts new syllables automatically.

Your job is just to type the characters in the correct order!

When the software is still “building” the character, you’ll see a line underneath.

Let’s say you want to write the word 주세요, a polite request meaning “please give.”

Here is what you would see on the screen while typing: 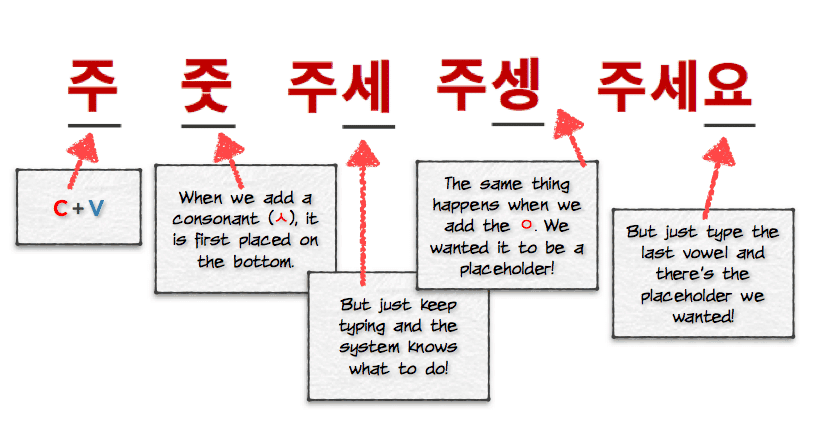 See the black line underneath the characters? It shifts to the right as each syllable is completed. This indicates we are working on that syllable!

Never worry if what you see on the screen is not what you intended. As you can see above, when you continue typing the software creates the correct syllables once the next character is added. It’s a big help!

Here is where prior knowledge of the Korean alphabet comes in handy! Our Inner Circle lesson on Character Combinations goes into detail but here’s the gist of it below. Type the vowel combinations in the same order to create them on your screen! 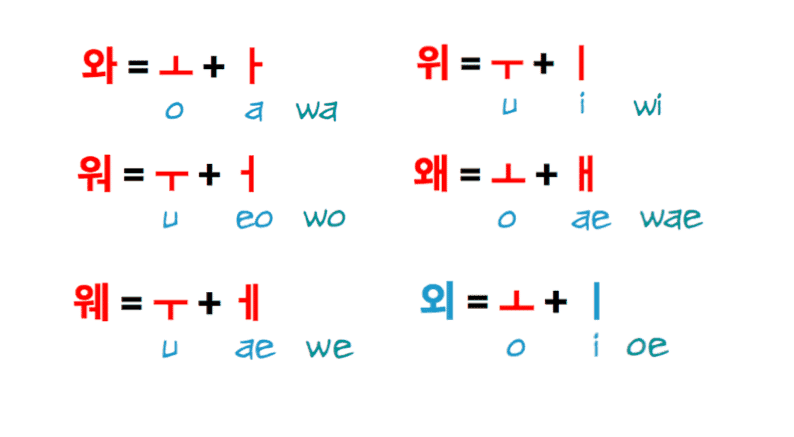 Just remember the placeholder. That’s your job to type it in, that keyboard doesn’t do that for you!

Got the basics of the keyboard letters down?

Let’s move on to the next Step and memorize the keyboard!

Even if you’ve elected to use a Keyboard with the Korean characters on it (or stickers), you’ll be served immensely in your typing ventures by committing the layout to memory.

To do this, we recommend using mnemonics. These are associations using stories or images that you can use to remember.

Allow us to tell you a story.

There once was a boy named Min Soo who aspired to be a Pear Ninja!

Pear Ninjas were the highest ranking ninjas in the ancient culinary arts.

His master, Yoo Jin, told him that in order to be a Pear Ninja, one had to complete three trials.

The first was a bungee jump. He encouraged Min Soo in this first trial: Yoo Jin was actually afraid of heights, so he had Min Soo wear an ActionCamera to make sure he did it. He was scared, but Min Soo made the jump!

Then he was told by Yoo Jin that male Pear Ninjas had to have long hair: Trial number two took him a whole year to complete.

After growing his hair, Min Soo was ready for trial number three. Yoo Jin told him:

Use Karate To Chop Pears 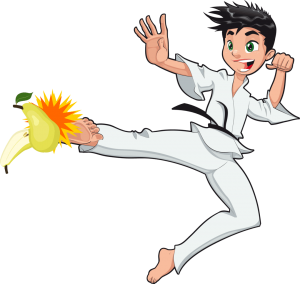 After years of practice, he was finally able to Chop Pears, and using his feet even!

He achieved his dream and became a Pear Ninja, preparing delicious pears from the shadows and living happily ever after.

Now that’s a silly story, but it can help us to remember the placement of the consonants on the Korean keyboard!

In the story, there were three trials. Let’s put them together, shall we? Look at that, they rhyme!

The first letter of each word corresponds with the sound of the Korean character (except the O which represents the placeholder character)!

For the third line of the rhyme, the U is in brackets because it is actually to the right. On the keyboard, start on the fifth key over then back to the first key to continue the rhyme. The fifth key is the vowel ㅠ so it sounds like the letter U!

But if it’s easier, just remember the rhyme as follows and start on the left:

See the diagram below for simplification — just follow along with the rhyme and look at the numbers. Try to recall the association with just the letters. 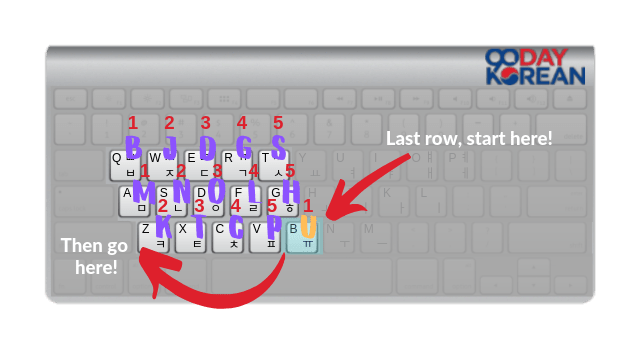 For the vowels, their placement on the keyboard is logical and thus easy to remember: 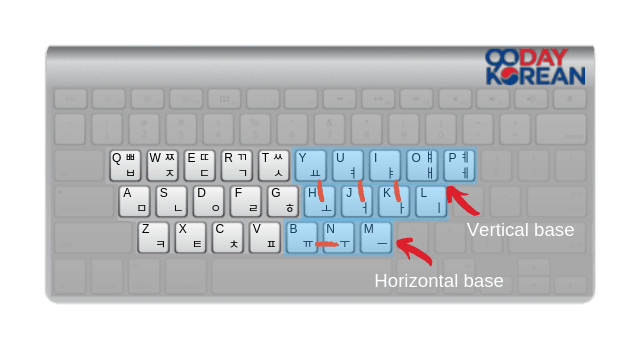 Picking up these patterns can help you locate the characters with precision and decrease your reliance on constantly looking at the keyboard for the next character. The best part of associations like this is that they're highly customize-able.

If you don't like ours you can create your own that's easier to remember so you'll be typing Korean like a pro!

Now that we’ve got the basics covered, it’s time to start typing! A stepping stone to using a Korean keyboard is to first get in some practice and an online keyboard is a great way to do that.

This is especially valuable if you will be typing on a computer without the Korean characters written on it.

This option helps you get a feel for the layout of a standard Korean keyboard.

Here are some online keyboards we’ve found helpful, but feel free to use any one that you wish.

We recommend numbers 1-3 because their layout is very similar to an actual Korean keyboard and so typing on them is much more realistic. Try them out for yourself!

Once you’ve got a feel for how things work, try some practice typing exercises. Type the keys written below the word and it will automatically be created. Are you up for this typing challenge?

The last step is simply to get lots of Korean keyboard practice. This is the real fun part!

When you're about to practice typing or writing Korean using a Korean keyboard, it'll be a bit challenging as you won't be able to type as fast as you normally do in English. 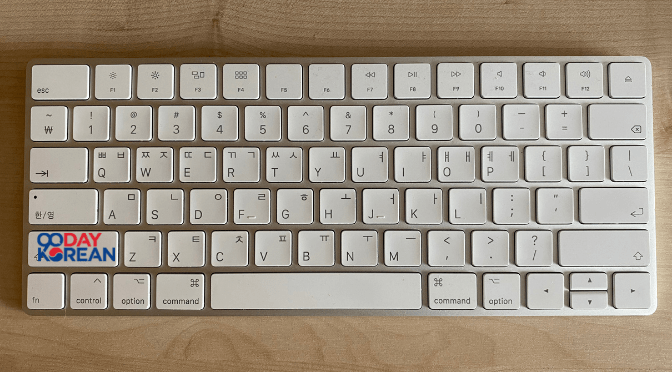 The skill of typing Korean has double the benefit since most newer phones have the ability to install full Korean keyboards.

You’ll put these exact same skills into use when texting!

But perhaps one of the biggest benefits to learning how to type is that it is one of the best ways we know of to help you get better at Korean. It connects you virtually to the world of Korean speakers and at that point, your options are limitless!

From solidifying the basics of fitting characters together to learning new slang phrases, texting and typing in Korean will be a linchpin in your journey toward Korean fluency.

Get used to typing with the Korean keyboard and eventually it will become second nature. Facebook, forums, websites, messengers — the internet is now yours to explore!

When you've gotten a good handle on this, you can graduate to Korean texting. An absolute must-know topic for anyone who wants a social life in Korea. Even if you can't write full Korean sentences, try simple greetings and common words you know.

Put this knowledge to good use and go have fun with it!

Leave us a comment below if you have any questions or let us know what you'll use your Korean typing skills for (in Korean if you're up to the challenge). We're excited to hear all about your plans for your new skills!

53 replies to "Korean Keyboard: Learn how to type on your phone, tablet, & computer"