“Ugly” in Korean – Say it in different ways

Today, we’ll be learning how to say “ugly” in Korean.

It was not long ago that many K-pop lovers’ favorite song to listen to on repeat was 2NE1’s Ugly. The word itself is perceived as a negative one and thus should be carefully used, just like in other languages. But just like the song shows, there’s also a time and place where it may be appropriate to use it without coming across as too negative. 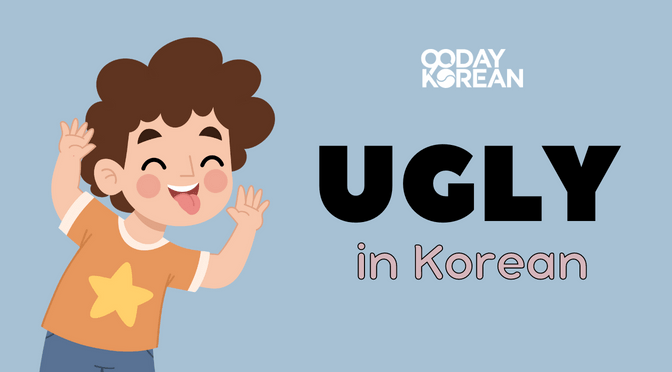 Interestingly enough, the word for “ugly” in the Korean language may not be one that many foreigners are familiar with. But today, you will be learning it!

How to say “Ugly” in Korean

There are different words that you can use to describe ugly in the Korean language. As you may remember from our article for Korean adjectives, in Korean grammar, adjectives – such as ugly – are actually classified and used as descriptive verbs. This means to use the word in action, you need to conjugate it, just like any regular verb.

The words differ on what you wish to describe. Whether it’s an object, character, or appearance. We’ve written down each word in Korean letters below, so it’s best to be familiar with the Korean alphabet before anything else. Check out the sentence examples after each word too!

The first word you can use for “ugly” in the Korean language is 추하다 (chuhada). The most common way to conjugate the word is by adding -ㄴ to the stem of the word, in which case it turns into 추한 (chuhan).

For example, the word “ugly sweater” would be 추한 스웨터 (chuhan seuweteo). Of the words to use for ugly, 추하다 (chuhada) is perhaps the strongest with its connotation and can also be used to mean hideous or unsightly. Therefore, you want to be especially careful in which situations you choose to use this word.

Why are you behaving so ugly?

The second Korean word that is commonly used for “ugly” is 못생기다 (motsaenggida). This word is basically the direct opposite of the word handsome, which is 잘생기다 (jalsaenggida). You can learn more about the word handsome in Korean in the article dedicated to it, by the way!

As this word, too, is a descriptive verb, you will drop the -다 and add in -ㄴ when you want to use the word. For example, “ugly bag” would be 못생긴 가방 (motsaenggin gabang) when using this word.

The word 못생기다 (motsaenggida) can also be used to mean unattractive. The connotation of this word isn’t as harsh, and therefore you may hear it in use more often. However, you might not want to use it when describing another person’s appearance.

The word 못나다 (motnada) is quite similar to 못생기다 (motsaenggida) in its meaning and usage. It can also be used to describe something looking foolish or as if it did not turn out well.

That is such an ugly/foolish thought.

보기 싫다 (bogi silta) is yet another word with a meaning similar to ugly. Its literal translation is “hate to see,” which can give you an idea of situations where you may be able to use it and how often you should refrain from using it.

Unlike the other words on this list, it is conjugated with -은 rather than -ㄴ, with the adjective used in action being 보기 싫은 (bogi sireun).

This hat I knit is so ugly.

험악하다 (heomakada) is a word for ugly that may be used to describe the atmosphere or someone’s behavior. It can also mean that something is intimidating or tense or threatening rather than ugly.

Our team’s atmosphere is very ugly these days.

Perhaps the harshest of them all, 흉측하다 (hyungcheukada) can be used to describe something as hideous, unsightly, or ghastly.

That is the most hideous shirt I’ve ever seen.

Wow, are you surprised that there are more words for “ugly” in the Korean language than you might have expected? Remember that, although they are good to know, you will want to be careful when using them, even with your friends.

Regardless if you’re saying it in languages like Japanese, Greek, Finnish, Romanian, English, or your native language, use this word with caution!

We hope we were able to help you find the answer to your question about the Korean word for “ugly.” Maybe you’d like to cleanse your palate and learn the word for “beautiful” next? Don’t be shy and give compliment someone with this word next time! You can read about it here.