Using The Bus In Korea

If you want to know about using the bus in Korea, then you’ve come to the right place! We’ll tell you all about it below.

Although Korea, and especially Seoul, has an extensive subway and train network with which you can painlessly get from point A to point B, it is far from being the only choice of transportation.

Another means of transportation that you should give your attention to is the bus network. After all, it is the one that also operates in the villages and smaller cities of South Korea, unlike the trains and subways. And although Seoul’s subway lines have amazing reach, you would definitely find it lacking without the bus network to complement it. 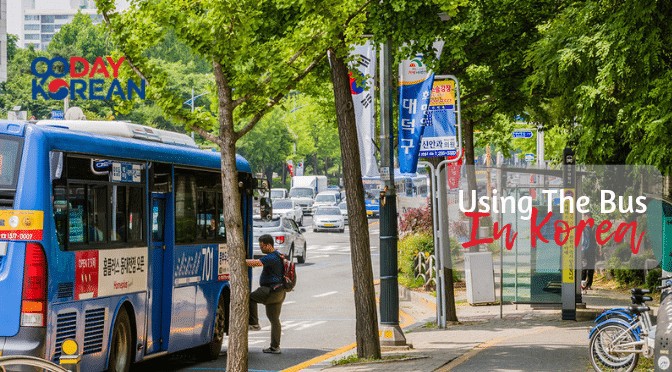 Many foreigners in Korea, however, continue to find the bus system complicated and difficult to figure out, especially in the bigger cities like Seoul and Busan. Typically, the longer you stay in Korea and the better your Korean gets, the easier it becomes to figure out. In the beginning it’s understandable, because it can seem so hard and impossible that many don’t even give it a try. But opting to use subway only often means having to walk longer distances, or having to take a taxi to get to many places.

But what if that was something you didn’t need to do? By reading through our guide, you can shortcut your way into a better understanding of the Korean bus system. The sooner you have a grasp of it, the sooner your life in Korea will transform for the better!

Unlike many other cities and towns in Korea, Seoul has an incredibly extensive subway network system. This enables for relatively easy travel from one’s home to wherever you need to go. However, as extensive, convenient and great as it is, it’s not perfect. The simple fact is that not every spot in Seoul can be reached by the subway, or at least not by the subway alone. At the same time, its bus network is also more extensive than other cities and towns, but also seemingly more complex to understand.

In Seoul, the buses are divided into various color groups based on their routes. Green buses are ones that go a route that only accesses a select number of neighborhoods in one part of the city. Blue buses, on the other hand, go from nearly one side of the city to another. Then there are red buses which actually go outside of Seoul and into surrounding areas such as Ilsan, Bundang and Yongin. There are other buses in the Seoul area, but these three are the main ones.

Unlike many other countries, the buses in Korea do not have a fixed operating schedule. However, they do typically come every 10 to 15 minutes, depending on the route and the amount of traffic. Luckily you won’t have to stand on the bus stops completely clueless over when the next bus will come. Many bus stops will have an electric sign telling you how many minutes later the next bus will arrive. There are also apps, KakaoBus being the most popular, with which you can check out the arrival time of the next bus as well as its route. On KakaoBus, you can also check out which buses stop at your bus stop.

It really isn’t that difficult to figure out which bus or buses to take to get to your destination. All you need is Naver Map, where you can input your starting location as well as your desired destination, and it will give you the suggested directions, typically mixing both subway and buses.

So what exactly do so many foreigners in Korea find difficult about navigating the buses? There is one issue that seems to rise above everything else: getting off at the right bus stop. Chances are it’s not that difficult for you to find the right bus to take you where you want to go, or the bus stop to get on that bus from. However, actually getting off the bus may be tricky.

But why is that? Well, the unfortunate reality of the bus system in Seoul, and frankly all over Korea, is that all of the route information on the bus stop and inside the bus is only available in Korean! This can be tricky to handle for someone who can’t speak Korean, especially if their Naver Map application shows the bus stops in English only. And although many bus stops on many routes are announced in English, not all of them are, leading to anxiety over whether you’re getting off at the right stop.

Besides learning to read Korean so you know which stop is coming up, the best you can do in this situation is try to keep track of where you are with your smartphone’s GPS. At least then, you’ll be getting off close to your intended destination.

Traveling to Korea? Check out this packing list, as well as other helpful Korean applications for your smartphone.

Compared to Seoul and Busan, many cities and towns in Korea use buses alone as their public transportation. The routes are typically less complex and there are less buses to choose from. However, in these towns the buses will come at larger intervals from one another, so it’s best to plan ahead which bus to take so you won’t end up waiting an hour for a bus to come.

At the end of the day, Korea not only has an extensive subway and train transportation network to get you where you need to go, it has an incredible bus network as well. And although it may be beneficial for you to learn how to use apps such as Naver Map and KakaoBus, as well as learn the names of the needed bus stops in Korean, you’ll be delighted to know that navigating the bus in Korea really isn’t all that difficult after al!

7 replies to "Using The Bus In Korea"