Just like many places in the world, Valentine’s Day in Korea is an important romantic holiday. However, like Japan and Taiwan, South Korea has put a unique twist on the holiday.

Curious what goes on during this lovey-dovey holiday in the Land of the Morning Calm?

We’ll tell you everything you need to know about Valentine’s Day in Korea. 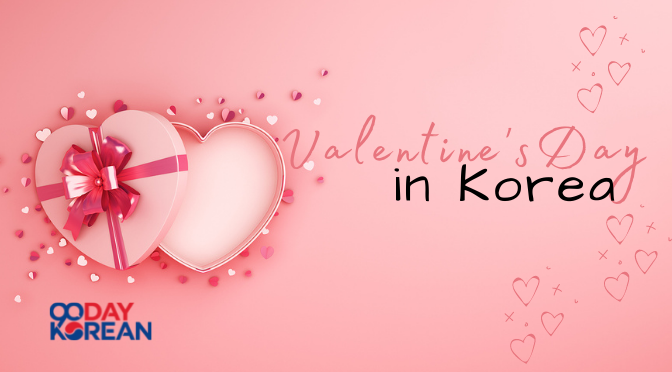 When is Valentine’s Day in Korea?

Do they celebrate Valentine’s Day in Korea?

Yes! However, South Koreans celebrate it differently in terms of gift-giving. In South Korea, only women give chocolate to men on this day. Contrary to what is done in the US, women give men gifts on Valentine’s Day.

Is Valentine’s Day a Holiday in Korea?

Although Valentine’s Day in Korea is widely celebrated, it is not a public holiday. This means that businesses, government offices, schools, and other establishments operate on regular hours.

How do Koreans Celebrate Valentine’s Day?

On this day, convenience stores and supermarkets have large displays filled with all sorts of popular chocolates and even ready-made goodie baskets to purchase. Many stores and businesses are busy marketing their products in the early weeks of February or a week before Valentine’s day.

How is Valentine’s Day celebrated in Korea?

Couples go on dates on February 14th. It’s a happy and romantic day for couples. Although people may say that it’s not an important holiday, you should definitely pay attention to it if you are in a relationship with a Korean person. They may not care for themselves, but their peers or friends may ask them, and it’s better if they can say something about celebrating it if asked.

Single people don’t celebrate this day, but they have a similar holiday for themselves called Black Day.

What makes this holiday so unique?

Although it is a holiday brought to Korea from Western countries, Korean Valentine’s day is celebrated a bit differently. In Korea, women give gifts to men. The customary gift is chocolate.

This is a day where you celebrate together with your significant other if you are in a relationship. It is also seen as a great occasion for women to confess their love to men. So for single women, they can gather all their courage and grab this day to let their men know their feelings.

What kind of gifts are given on this day?

The women may feel encouraged to make the chocolates by themselves. Or they might also get some high-quality handmade chocolates from chocolate shops, often complete with customization options, such as including the man’s initials on top of the chocolate. And if the woman’s crush reciprocates her feelings, she will, in return, receive at the very least gifts that are equally extravagant but typically even higher in value and flashiness than what she has given out.

While Valentine’s Day is unique and fun, it can also be quite nerve-wracking for women. Not only will she have to take the first step and be the one to confess her love, but she will also have to wait a full month on White Day to see what her heart’s chosen one thinks of her!

Simultaneously, Valentine’s Day is in some ways less pressuring of the two big romantic holidays. If a woman is not in a relationship, she can choose to be too shy to confess her love. Conversely, a man who has been confessed to on this day by being given chocolates is expected to shower the woman with love, candies, and gifts on White Day that follows in March.

While it remains one of Korea’s most important romantic holidays, in today’s modern Korea, it is also becoming more common to offer chocolates to one’s co-workers, family, and friends on this day.

In addition to Valentine’s Day, the 14th of each month marks a romantic holiday of some kind. Some examples are White Day ( March 14 ) and Black Day ( April 14 ). Most of them are smaller and only recognized by a handful of people, while others are more important and heavily celebrated. Of them, Valentine’s Day is one of the two most important ones.

What is White Day in Korea?

White day is another holiday for Koreans to celebrate love, which is observed every March 14, 1 month later than Valentine’s Day. Much to the delight of some girls, on March 14, the roles are reversed.

Originally called Marshmallow Day, the White day is popular in east Asia where men give gifts to women. During this time, men reciprocate the symbolic gesture done by the women who gave them gifts on February 14.

What is the difference between Valentine’s Day and White Day?

The difference between these 2 days lies in who gives what to whom. On Valentine’s Day, women are giving out gifts or chocolates to their valentine. Women are also the ones who get to confess their love for men.

However, on White Day, it’s the other way around.  The following month after Valentine’s day, White day is the opportunity for men to respond or reciprocate the love they received from women on February 14.

Single men can also see this day as an opportunity to confess their love for women.

What is Black Day in Korea?

Black Day is a day dedicated to all single people who didn’t receive gifts, chocolates, or confession on both Valentine’s Day and White Day. It’s a day when single friends meet each other to eat jjajangmyeon, a noodle meal with black sauce (and popular comfort food), thus called “Black Day.”  Some South Koreans take the tradition a notch higher by going out in all black, including wearing black nail polish! Single men and women observe it on April 14. And unlike the other 2 days, advertising for Black Day is almost nonexistent.

What is your favorite part of Valentine’s Day in South Korea? Let us know in the comments below!