How To Say “What” In Korean – Basic Korean Question Word

Today, we will learn how to say “what” in Korean.

Going back to basics, there are a few words in any language that hold more importance than others, and what might one of those words be? The word “what,” of course! ㅋㅋ

It is integral in so many ways and so many questions. 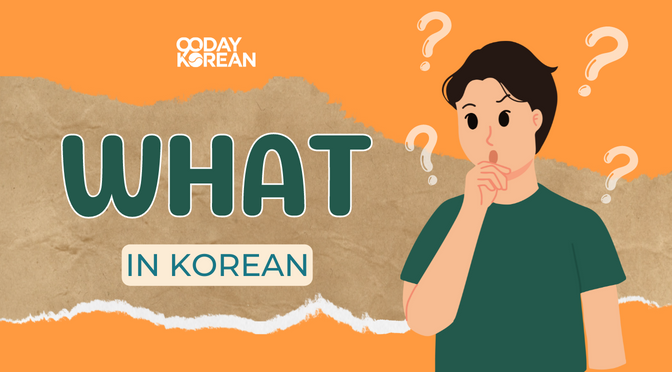 “What” is just one of the important words in Korean that you need to know when asking a question. There are several others! Check out this article for additional Korean question words.

So without further ado, let’s learn how to say “what” in Korean!

How to say “What” in Korean

The most basic way to say “what” in Korean is 뭐 (mwo). 뭐 (mwo) is what you would use when simply posing the question “what?” It is shortened from the noun 무엇 (mueot), which also means “what” in Korean.

뭐 (mwo) is used as the most basic way to ask “what?” in Korean. The expression 뭐라고 (mworago) can be used if you did not hear what someone said. It can also be used to ask what someone would like to drink or eat or otherwise be served or ask what someone is doing or will be doing at a certain time.

What will you do on your birthday?

무엇 (mueot) is often used in more formal situations, for example, when you have to use a higher level of politeness because the person is a stranger or older person.

What is your job?

어떤 (eotteon) is used to ask “what kind” or “which,” for example, what kind of movies someone likes.

Which clothes will you wear to that party?

“What is this?” in Korean

If you want to ask “what is this?” in Korean, like when you’re holding an object, and you don’t know what the object is, you can say 이게 뭐예요? (ige mwoyeyo?) or 이거 뭐예요? (igeo mwoyeyo?).

When you want to ask what something is, you may say 뭐예요? (mwoyeyo?).

I have something to say

How to Write “What” in Korean

If you’d like to focus on practicing your writing skills, you can start by familiarizing each letter used in words below.

Here’s how you write “What” in Korean:

If you’d prefer to go in-depth with learning these letters first, you can also read our articles on Korean vowels and Korean consonants.

Learning how to say “what” in Korean will certainly make asking questions a lot easier for you. But the same with English, there are other useful question words that you can use. We have full articles for each of them:

Now that you know what is “what” in Korean, you’ll have more opportunities to learn. Asking more questions means learning more, so keep on asking! If you have some questions on this topic, drop them in the comment box. Happy studying!