When you first meet someone in Korea, it’s important to be able to ask “What is your name?” in Korean.

It’s an important phrase to know when learning to speak Korean, and it’s also good manners! 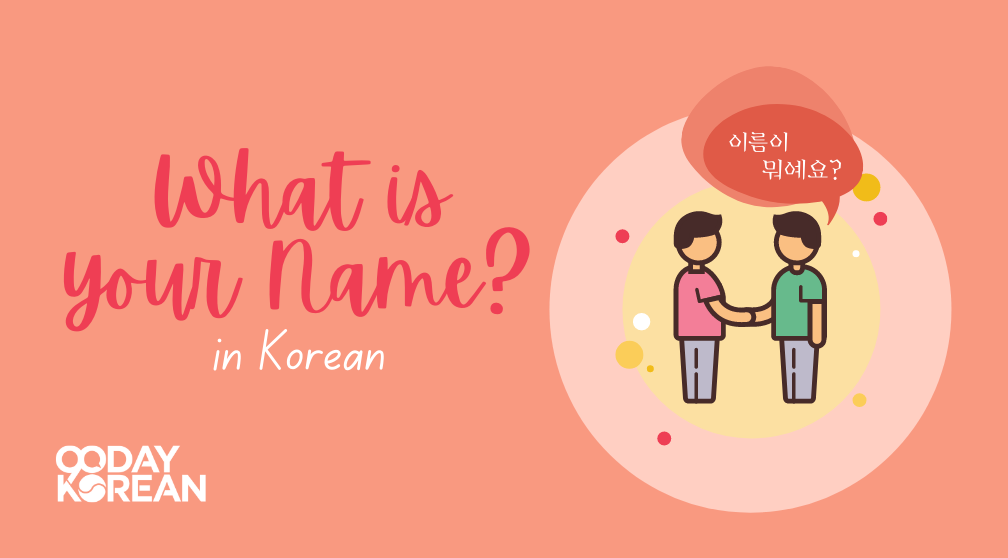 If you’re in South Korea and you meet new people, knowing how to ask someone’s name will help you with making Korean friends. It should be one of the first phrases you learn in Korean to meet new people. There are some nuances involved with names in Korean, so we’ll explain everything you need to know.

The examples will be given using both Hangeul (Korean Alphabet) and romanized Korean. You don’t need to know how to read Korean words to learn this phrase, but if you want to learn we have an awesome resource here.

Free PDF Guide for “What Is Your Name?” in Korean

There are two Korean words for “name.” The most commonly used word is 이름 (ireum). This is used in most situations, and used with the standard version of the phrase.

Another word that you may hear is 성함 (seongham), which is the formal word for “name” in Korean. You may hear this word in more official situations.

Now that we know the Korean word for “name,” let’s learn some ways to say “what is your name” in Korean.

How to say “What is your name” in Korean

There are different ways to say “What is your name” in Korean, depending on who you are speaking with. Here’s how you can say this in different levels of speech.

Formal “What is your name” in Korean

Use these phrases to ask “what is your name” in Korean to adults you don’t know or someone higher in the social hierarchy. For example, you might use these at a business meeting or talking to a person who is much older than you.

Some of the components are:

• 성함 = seongham | formal way of saying “name” in Korean. You might hear this if you make a dentist appointment and they ask for your name

You will probably hear these versions of “What is your name?” if you are talking with a public official. As this situation will come up a lot during your time in Korea, it is important to learn how to say and respond to the formal versions of “What is your name?“ in Korean. You’ll mostly encounter this at the airport, immigration office, or bank. Here’s a sample dialogue:

These are very formal ways of asking what is your name in Korean, so you can use them with everyone! However, if you’re talking to a small child and you’re an adult, you could also use the standard and informal versions below.

Standard “What Is Your Name” in Korean

Here’s how to say and pronounce “What’s your name?” in Korean in the standard way. You could use this soon after saying hello to someone new.

How to Say WHAT'S YOUR NAME? in Korean | 90 Day Korean

That wasn’t so hard, right? For more resources on learning Korean, you can also subscribe to our YouTube Channel to be updated on our latest videos!

This is the everyday version of asking “what is your name” in Korean. It’s similar to the formal version, except slightly less polite. It’s still ok to use with the majority of people. The components of the phrase are similar. It’s made up of:

Since this phrase is a standard way of asking for someone’s name, you might want to use this with people that are similar in age to you, or to those younger than you. You have to feel out the situation to know how formal your choice of words should be.

Here is an example of how to use the standard form.

In general, if you’re unsure about how formal to be, stick with the higher version. It’s always better to be overdressed than underdressed when it comes to choosing the appropriate words!

Informal “What Is Your Name” in Korean

Here’s how you can say “what is your name” in an informal way.

This is how you’d ask the name of a young child. The ending is 야, which is the most informal version of the verb 이다 (ida | to be).

This is the same as #1, except the ending is different. This one is slightly more polite, but you can use either version.

Here is an example conversation using the informal version.

My puppy is cute, right?

Other Ways to Say “What Is Your Name” in Korean

When asking for someone’s name in Korean, it’s possible you’ll run into other situations where you don’t get the name right away.

Here are some helpful phrases to help you navigate those tricky situations, and make sure you make a good impression on your new Korean friends or acquaintance!

If you didn’t hear the other person’s name, use this phrase to ask him or her to repeat it.

It’s possible that when you meet a Korean, he or she will give you his or her English name. Use this to ask “what is your Korean name?” First impressions are important! After you exchange names, make sure you throw in a 만나서 반갑습니다(mannaseo bangapseumnida) to show that you’re pleased to meet him or her.

Perhaps you’ve watched some K-dramas and got curious about your own Korean name should you have one.  If you’re looking for a Korean name to really get motivated to learn the language, go here to find out how to get your very own Korean name.

If you want it done for you, 90 Day Korean has a special paid naming service that will help you get a personalized Korean name that is the best match for you.

Now that you know how to say “what is your name?” in Korean, go out there and make some Korean friends!

Want more Korean phrases? Go to our Korean Phrases Page for a complete list!
Free PDF Guide for “What Is Your Name?” in Korean