“Why” in Korean – How to ask this important question

In this article, we will learn how to say “why” in Korean. Just like in any other language, in Korean, it is also important to understand the different question words and how to use them. Among those words is “why,” which we will learn today. 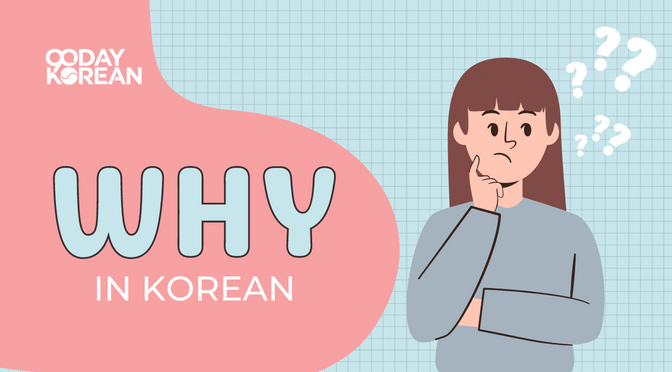 Not only does learning these question words enhance your language abilities, but it will also showcase you as an attentive and intelligent person to your audience. After we go over all the ways to use the question word why in the Korean language, you’ll be able to make all the inquisitive questions you’d like!

How to Say “Why” in Korean?

To say “why” in Korean, you can use the word 왜 (wae). Just like in English, you can use this question as a standalone, simply asking 왜? (wae). However, it may also be quite useful to add a little more meat to your question and specify what you are asking “why” about in the Korean language.

Using “why” in Korean as a question word

Here are some examples of how you can utilize this helpful question word in the Korean language:

Why do you want to know?

Using “why” in Korean in a statement

Additionally, you can also use 왜 (wae) easily in a statement. Here are some sample sentences in the Korean language in which it can be used:

I don’t know why my stomach keeps hurting today.

I don’t know why.

How to Pronounce “why” in Korean?

As was shown above, the Korean romanization for 왜 is wae. You can use this as a guide to learning its Korean pronunciation at the start. However, as we have reminded you in our other lessons, romanizations are also useful but not necessarily 100% accurate.

Therefore we encourage you to learn the Korean alphabet so that you can fully immerse in the pronunciation of 왜 (wae). In this way, you can eventually read Korean words more easily too.

What is “wae” in Korean

As you probably already guessed, wae is the romanization of 왜 (wae), the term for “why” in the Korean language. It’s the informal form when used alone but can be quite casually used. It’s especially commonly used by Koreans as a standalone term when they are upset or confused, or even angry about something.

What does “naega wae” mean?

This is the Korean romanization of the question 내가 왜? (naega wae), which translates as “Why me?” or something similar. Essentially, it is a question you’d ask yourself. For example, you could wonder why something specific is happening to you, why you acted a particular way, or something else similar.

This is the romanization of the question 왜 그래? (wae geurae). This question asks, “Why are you like this?” Kind of in a way that asks someone what’s wrong if someone looks upset. It’s a similar expression as 무슨 일 있어? (museun il isseo?) which is even more closely translated as “What’s wrong?”

A similar expression is an equally casual question 왜 이러니? (wae ireoni?). However, this may be more appropriate to ask specifically in situations where someone is acting in a weird or upsetting way.

Note that 왜 (wae) remains the same no matter if you are speaking in honorifics, in a formal or informal way. With sentences using “why” in Korean, you simply need to make sure the other word endings match the level of politeness you are trying to express.

The exception to this is when you are simply asking, “Why?” as in 왜? (wae) with no other Korean words in your sentence. In this case, you should add 요 (yo) and turn the question into 왜요? (wae yo) to speak in a formal way.

In Korean, you can use informal language when talking to your close friends or those significantly younger than you. However, with seniors and those above you in the hierarchy, it is much recommended to use a formal level of speaking or even honorifics.

And that’s it! Are you ready to have fun using the question word “why” in Korean? Try asking your Korean friends this question as you learn Korean further. What kind of sentences do you think you could make with it? Show us below in the comments!