Why learn Korean? – 10 Reasons to Learn This Magical Language

Have you ever asked yourself the question, “Why learn Korean?” What is so special about this language? Among all the languages in the world from every country, each is cool and unique and quite possibly worthy of learning; why do Korean language learners choose to study the language?

In this article, we’ll give you the top reasons to learn Korean and hopefully inspire you to continue your Korean language studies. Let’s get to it!

There are several reasons why people want to learn Korean. Besides Korean culture being popular worldwide, some people find the language easy to learn and speak.

Here are the top 10 reasons to learn Korean.

1. You can learn the Korean Alphabet quickly

At first glance, Korean may come across as an intimidating language due to having its own alphabet, Hangeul (한글) which is sometimes spelled as Hangul.

However, Hangeul or Hangul is actually remarkable for how easy it is to learn and memorize. In fact, with us, you can master your Korean language skills in just 30 minutes!

2. The writing system is incredibly logical

Not only is the alphabet quick to memorize, but so is learning how to form words and sentences with them. Because the alphabet didn’t naturally evolve but was explicitly created by King Sejong, it functions quite differently from many other languages.

The ease and logic behind learning the basics of writing and reading make Korean a language worth learning.

One massive advantage of Korean grammar is the lack of the need to conjugate verbs, at least in the same way you would have to with many other languages. Thanks to this fact, fewer headaches and more learning can take place!

For example, there’s no need to worry about noun genders. One big struggle people experience when learning French, Spanish, or Italian languages is learning how all nouns have genders – and what gender each noun has! But the Korean language doesn’t have them at all, which is one more awesome way to make learning the language a little simpler.

If this reason was enough to convince you to learn the Korean language now, check out our beginner’s guide to Korean grammar.

Because the Hangeul (한글) is built on phonetics, pronouncing Korean is also incredibly logical. Speaking the language is not as difficult as one might think. When you first hear native Korean speakers, the sounds may be new to you, but you’ll quickly learn them as everything is pronounced the way it is written.

We have a guide for Korean pronunciation as well to get you started. With practice, you’ll be able to know a lot of Korean words properly and start speaking the language in no time!

Did you know that you could learn a decent amount of Korean vocabulary in the same amount of time it takes to finish this article? This is thanks to Konglish.

“Konglish” stands for mixing Korean and English in speech. That means there are a lot of loan words from English in the Korean language. In turn, it means less new vocabulary to learn.

Since you already know many of the Konglish words in English, now you only need to nail the Korean way of pronouncing them. Konglish is an excellent way for beginners to speak Korean without necessarily memorizing a lot of foreign words.

Just with a couple of Konglish words in your arsenal, you’re sure to start to speak the language immediately!

Check out some great Konglish words to get you started.

Thanks to bands like BTS and Blackpink, and many other world-famous K-pop artists, K-Pop is currently at its peak as a worldwide phenomenon. The K-pop phenomenon has traveled beyond Asia and reached the United States and Europe. The Korean Wave is here to stay!

Korean pop culture and Korean pop music are definitely in their golden age. That makes the South Korean language a super cool one to be learning at the moment.

Korean popular culture is super trendy these days. So cool, in fact, you might easily find friends to study together with! Better yet, maybe you could find a South Korean friend to practice your Korean with.

You can have your love for Korean Music and culture as your “something in common.”

Learning South Korea’s language will help you appreciate the lyrics of K-pop songs. Furthermore, besides the songs, K-pop has so much more content (like behind-the-scenes videos,  reality shows, variety shows, and talk shows), all of which are in Korean. You’d enjoy watching more content if you knew the language.

7. You can understand Korean dramas and movies better

We’re sure you’ve heard about Korean cinema. Not only are Korean dramas and movies great to watch for their popularity, but they also make for some of the best practice materials for listening comprehension you could have when not in Korea. You could even learn a thing or two about their culture while watching your favorite Korean drama.

There are so incredibly many top-quality dramas and movies to choose from. In fact, wanting to watch many Korean dramas and movies without subtitles might be reason enough for many people to start learning Korean.

Knowing how to speak and read in Korean would make singing along to Korean songs, watching Korean movies, and just consuming Korean content online so much more fun. If you ever come to Korea, try watching these movies in Korean movie theaters for a full Korean cinema experience!

8. Korean culture is intriguing and unique

Korea’s pop culture is world-class, but beyond that, there’s a lot to love about the culture in Korea. It’s tremendously interesting and, in many ways, one of a kind. Even before the Korean wave,  culture and arts have been a big part of Korea’s identity. 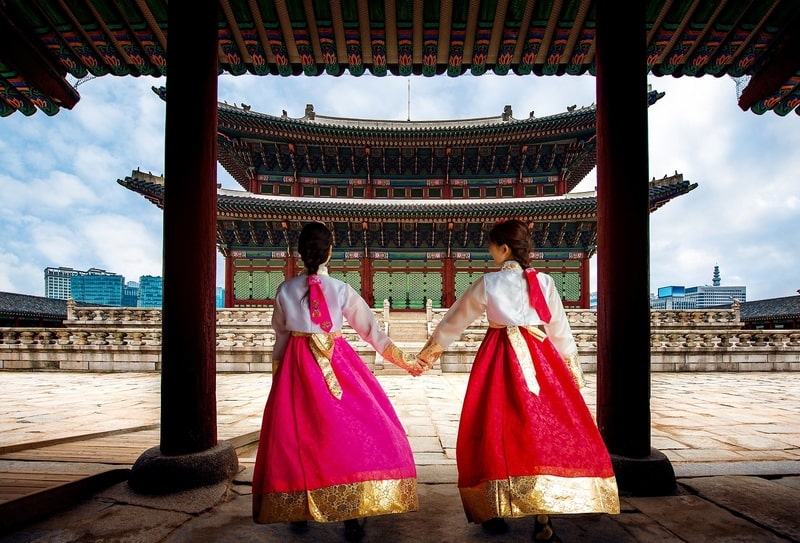 It’s possible to research and experience parts of it without knowing a lick of Korean. But the best bits you’ll likely only be able to understand once you also understand the Korean language.

Most Koreans speak enough English to survive your visit with flying colors, even if you aren’t fluent in Korean. However, communicating in the local language makes transactions in Korea’s restaurants and other public places more convenient and comfortable for both parties.

Not to mention Koreans will find you so cool and respectful for taking the time to learn their language!

When you travel to a different country, it’s always good practice to learn some words in that country’s language so locals can understand you.

Koreans do spend a lot of time studying English and other languages. However, the truth is that it’s always easier to make friends with them when you approach them using Korean. But making Korean friends also means you will often get to put your Korean skills into action, making it a useful language to learn.

Korea has a vibrant culture and visiting Korea to know more about its way of life is worth it. However, you may want to brush up on your Korean before your trip if you want to experience Korean culture fully. Trust us; the locals will love you for it.

10. Learning Korean can be useful for your career

Especially if you want to work in translation, interpretation, or other jobs that heavily involve languages, having the Korean language included in your repertoire is a massive advantage.

Korean companies or Foreign companies with significant South Korean relations will see it as a big advantage if you include proficiency in the Korean language. Many international companies are also hiring Korean native speakers, especially those companies that aim to market to the South Korean population. So if you want to work in Korea, learning the language will greatly help.

Although many foreigners can speak Korean, it remains a language that few people can use as their talent. Therefore, it can be more advantageous to speak Korean proficiently rather than Japanese or Chinese, Russian, Spanish, French, and so on, for that matter.

If you’re thinking about learning Asian languages, why not start with Korean? We have a few tips to help you learn fast.

Other Questions that language learners ask

If you’re still not convinced about learning this beautiful language, we’ve compiled several questions that most language learners ask before taking the first step in learning Korean. Maybe by answering these questions, you’ll be encouraged to start learning Korean.

Is learning Korean worth it?

Several factors make learning Korean worth it. First, it’s a fantastic and fun language. If you’re a K-drama fan, you can understand the dialogues without needing subtitles. And if you love K-pop, then you’ll appreciate the lyrics, and you get to sing along with your favorite artist.

Second, if you visit or live in Korea, it will undoubtedly be a new language worth learning for you. Same if it is a language connected to your family history or your university degree. Perhaps learning Korean might even be necessary for your job!

Learning Korean is worth learning because it opens you to a wider horizon. There are several reasons to learn Korean, as we’ve discussed in the article above.

It could also be that the reasons above don’t apply to you. You may want to learn a language and Korean just happens to be the one you’ve been contemplating taking on.

Is Korean hard to learn?

Generally, learning Korean isn’t difficult to learn. It may depend on your native language or language learning experience. But there’s nothing too complicated when you give your heart, time, and energy to learn something, which also applies to learning Korean.

If you have the right materials and strategies on top of your dedication to learning Korean, it won’t be difficult to learn the language.

Should I learn Korean?

Although, at first glance, it may not seem like much more than a quirky niche language to learn for fun, learning the Korean language can have many advantages for you. Its relative easiness, coupled with the strong popular culture behind it, makes it a fun language.

But it’s in its usefulness both in living and traveling in South Korea and how you can utilize it for work that you can truly see what a magnificent language Korean is to learn.

We hope that we’ve given you a new perspective on your Korean studies. Initially, you might feel that Korean is a new language that’s difficult to learn but eventually, with time, you’ll find that if you’re going to pick a foreign language to study, Korean might be the one for you.

So there you have it! Hopefully, you’ve now answered the question, “Why learn Korean?”. We hope this article gives you the much-needed push to begin the Korean language journey. Happy studying!

What questions do you have about learning Korean? Let us know in the comments below!