How to Say “Goodnight” in Korean – Wish someone a good sleep

In this article, we’ll tell you how to say “goodnight” in Korean.

Imagine you’re in your pajamas, your skincare routine is complete, your teeth are brushed, and you’re ready to sleep. What do you want to say to your roommate, sibling, or spouse before you dose off to dreamland? Of course, you’d like to wish them a good night! 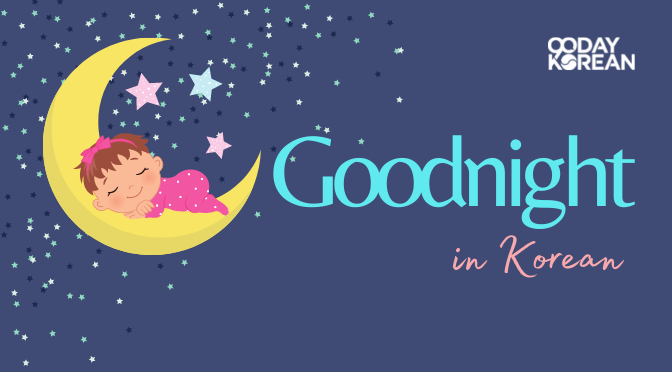 Although several phrases will be taught in this lesson, it may be best to pick one formal and one less formal expression and practice trying to use those expressions as much as possible.

We also have a FREE guide that you can take with you on the go. Check it out below:

All set? Here we go!

In English, people normally say “goodnight” or “sweet dreams” to someone to wish them a good night. On the other hand, in Korean, there are plenty of ways to express this phrase, depending on who you are speaking with and when it happens. Let’s know more below!

Before reading the rest of the article, you can take a look at the video below.

How to Say GOOD NIGHT in Korean | 90 Day Korean

The first way is through its formal version. Below are ways to say “goodnight” when you are talking to someone older or someone of a higher social status than you.

If you have studied “How to Say Goodbye in Korean,” then you will be aware of the word 안녕히 (annyeonghi | peacefully) already.

The next word 주무세요 (jumuseyo) is the formal version of 자다 (jada | to sleep). Both of these are some of the most common Korean words, similar to what is on this list. 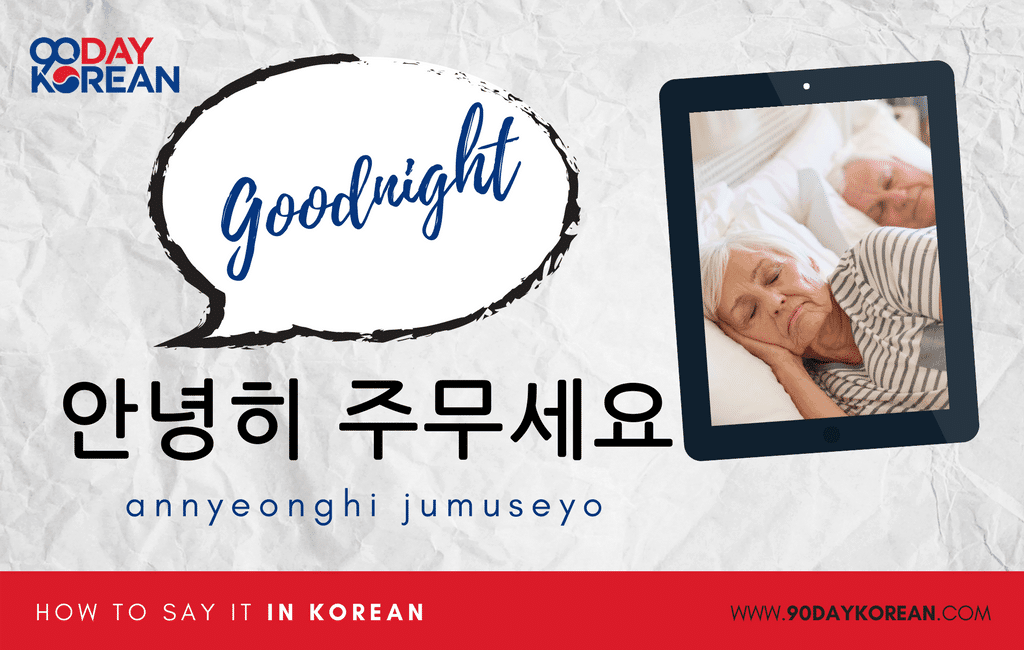 In order to show respect in Korean, you not only need to add 시 into expressions, but you also need to change certain words.

From the lesson on saying goodbye, we learned that 계세요 (gyeseyo) comes from the honorific version of 있다 (itda). Likewise, if you want to say “sleep” in a formal setting, then you should use the word 주무세요 (jumuseyo). Use the expression 안녕히 주무세요 (annyeonghi jumuseyo) when speaking to people who are your senior or who are a generation or two older than you.

Another expression you can use is 편안한 밤 되세요 (pyeonanhan bam doeseyo). This comes from the verb 편안하다 (pyeonanhada | to be comfortable) and the word 밤 (bam)which means “night” so the expression’s literal meaning is something like “have a comfortable night.”

Next is the standard version of this phrase.

The verb 자다 (jada) means to sleep, and 잘 (jal) means “well” so the expression 잘 자요 (jal jayo) means “sleep well.” You can use this expression to say goodnight to somebody. 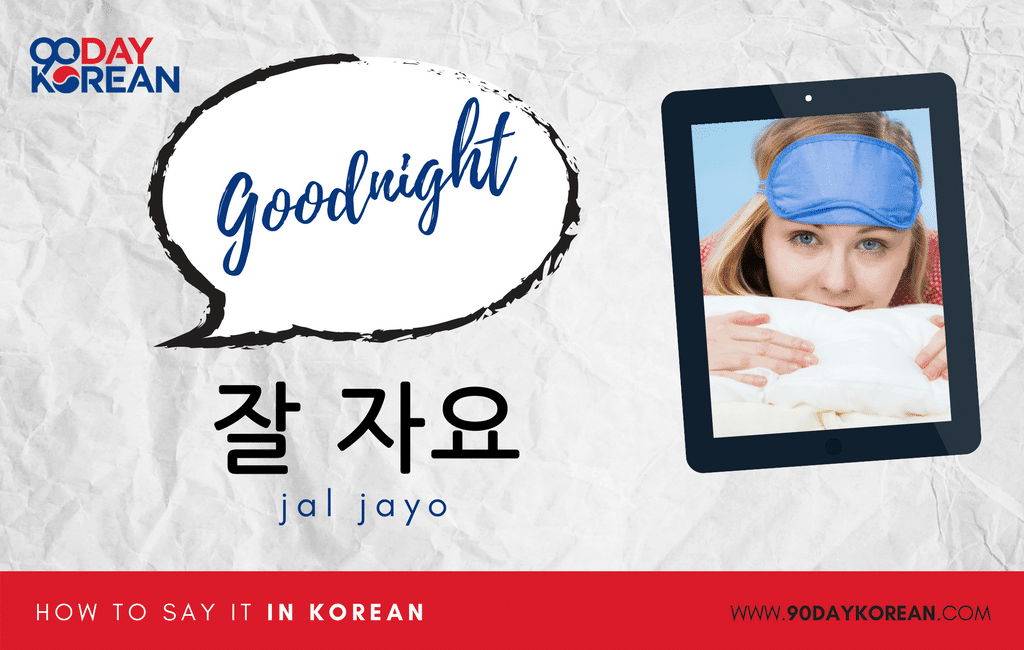 Lastly, here is how you can say “goodnight” in Korean in an informal way.

This is similar to the standard version, 잘 자요 (jal jayo). If you are speaking to somebody that you are close to, who is the same age or younger than you, then you can drop the 요 (yo) from the end of the regular expressions. 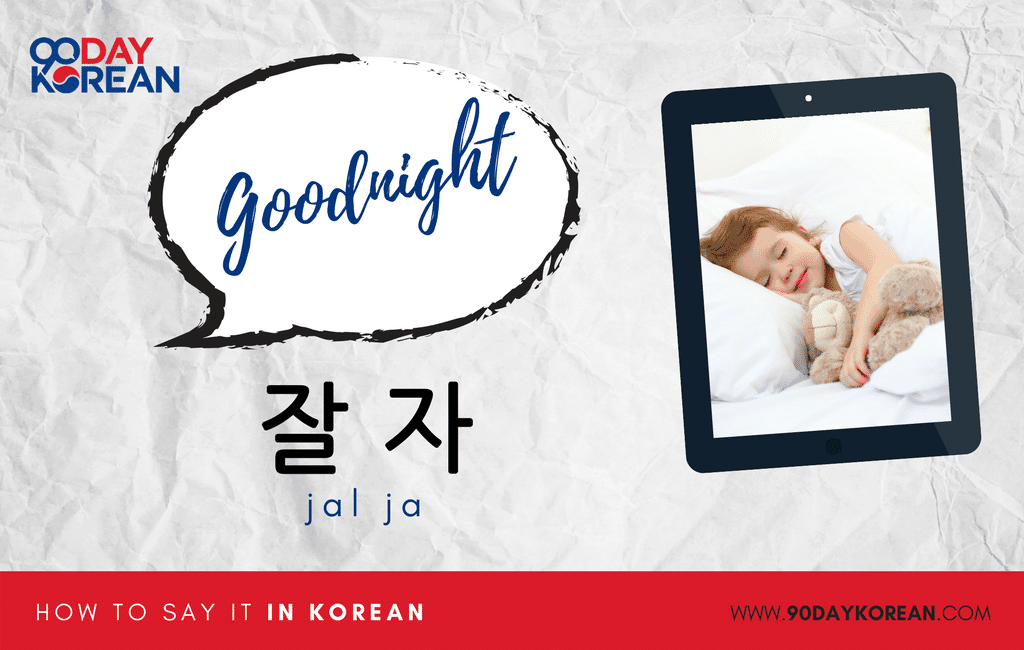 What is “Sweet Dreams” in Korean?

Another phrase you often say when greeting someone goodnight is “sweet dreams.” Here’s how you can say it in Korean.

There are several Korean verbs that usually are made up of two separate words. 꿈을 꾸다 (kkumeul kkuda) is one of these, 꿈 (kkum) means dream so literally 꿈 꾸다 (kkum kkuda) could be translated as “dream dreams,” but you should see the two words together as an expression meaning “to dream.” 좋은 (joeun) means “good this expression means something like “dream some good dreams.”

Use these expressions with people who are of a similar age and rank but you don’t know too well.

For this version, we just dropped the 요 (yo) if you will say this to someone you’re close with.

“Did you sleep well?” in Korean

If you see somebody the next day and want to ask them if they slept soundly or they slept well, here’s what you can say.

The verb 주무시다 (jumusida) has been put into the past tense and asked as a question forming 안녕히 주무셨어요? (annyeonghi jumusyeosseoyo). 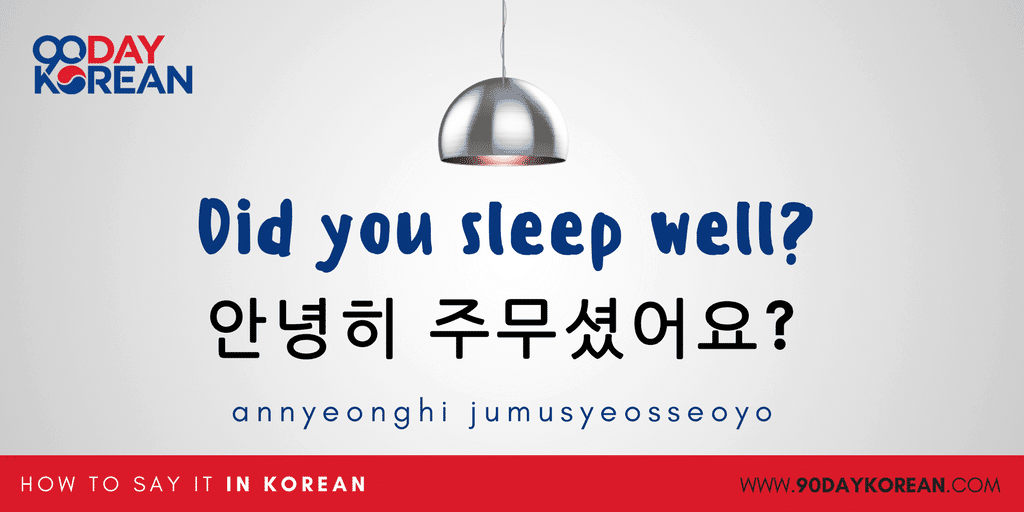 Apart from 안녕히 주무셨어요? (annyeonghi jumusyeosseoyo), you can also use these words to greet someone in the morning in Korean:

You can use 잘 잤어요? (jal jasseoyo), which is the standard form of “good morning”, with your fellow housemates or if you’re traveling with someone who is older than you.

잘 잤어? (jal jasseo) is informal, so you can use this with people the same age or close friends.

“See you tomorrow” in Korean

In addition to knowing how to say “good night,” you may wish to use the expression “see you tomorrow” (내일 봐요 – naeil bwayo) in certain situations too.

Now, how do you say “sleep” in Korean? The word “sleep” can be used as a noun or a verb.

I’m going to sleep in a hotel.

The baby is sleeping.

Did you dream while you were sleeping?

Short sleep times are bad for your health.

Recently, more and more people are suffering from a lack of sleep.

I sleep a lot.

If you lack sleep, you lose concentration.

The word for “oversleep” in Korean is 늦잠 (neutjam). This can also mean “sleep in.”

If you have noticed, the word 잠 (jam) for “sleep” is used in this word.

Today is the weekend, so you can sleep in.

The cat is taking a nap.

Now you should have a good understanding of how to say “goodnight” in Korean. If you liked this phrase and want to learn more about the language, check out our complete online resource guide for how to learn Korean. We also have a step-by-step online Korean language program that teaches you how to have a 3-minute conversation in the first 90 days.

Need more Korean phrases to study? Check out our list of everything you need!